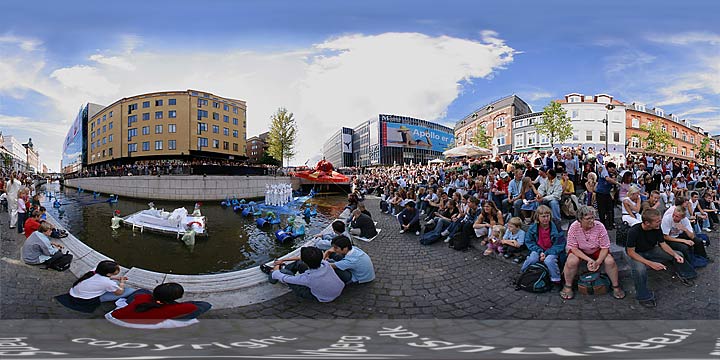 In my first week at Vassar, some three years ago, I attended a meeting with one of my colleagues in ACS and a faculty member to discuss some options for incorporating digital material into his teaching. The faculty member had been collecting images, audio and video during multiple trips to Asia as a part of his research. The reason he had come to ACS was to think about ways in which both he and his students could use this material as a way of expanding their knowledge and experiencing distant places. My response came in the form of a question: “So basically you want to give the students a ticket to anywhere?” Meant more as a rhetorical comment than as a criticism, I was thinking about the possibilities for providing meaningful experiences to students. In this case, the goal being to give them a sense of place, modeling a lived experience, or providing something that establishes a deep memory. This experience has remained vividly present even to this day with ideas of a contextually based pedagogy continually evolving.

Since the turn of the century, Art Historians have been using images as a way of addressing the visuality of the material they teach. Long at the vanguard of using media, they have established a tradition through sustained experimentation. This is a tradition that values the balance of decoding the semiotics of visual material with rigorous texts to provide a broader context for the time period, artist thinking and influences. In this mode of learning, the instructor provides a broader, more comprehensive understanding/picture to situate information.  Now with the pervasive use of images by historians, economists, and even English professors, an understanding has been built for the value of an image to reference and support the information that is being provided. With the explosion of other forms of media (video, audio, the web) and viable options for interactivity, these experiments will only continue to grow.

So, I return to this idea of Contextual Pedagogy. If I had to define the term, it would be a form of teaching that takes students outside the classroom they are sitting in and allows them to access vast worlds in radical new ways. It is highly dependent on digital media and interactive software, which takes a tremendous amount of time and effort on the parts of both faculty and those supporting the development of the technology. Yet it produces a much more expansive mode of comprehending material.

Over the next year, I will be speaking with faculty members, researchers, and technologists who are aggressively exploring these avenues.  May it be Google Earth, image-based VR, mobile gaming, or the iPad, I want to further explore possibilities for engaging in these dynamic moments of learning. It is my hope to clarify further the boundaries of these practices, the theory behind their use, and their relevancy on the liberal arts campus.