Everything has scopes and limitations – archaeology is no exception. Archaeologists solve some of the most nagging questions through excavations and laboratory analysis, uncovering new information about cultures and people. Certain sites can be packed with data, just waiting to be discovered; yet there are often extensive procedures needed before excavation, or in the worst case, social/political unrest in that area.

The Babri Masjid Mosque in Ayodhya, India, is an example of this. Hindu mythology claims that Ayodhya was the birthplace of Rama, a famous warrior and protagonist in the Ramayana. Supposedly, on the very spot that Rama was born, a temple was erected in his honor. In 1527, Mughal emperor Babar constructed a magnificent mosque over the temple, thus destroying the original edifice.

For centuries, the Babri mosque stood undisturbed – until 1992, when a massive riot of over 150,000 Hindus resulted in mass vandalism and ruining of the mosque. In no time, the building was reduced to mere piles of rubble and dust. Muslims across the country were enraged; over 2,000 people died in communal riots and India was in turmoil.

In order to figure out what to do with the land to appease the Hindus and Muslims, the Government of India called upon the Archaeological Survey of India to run preliminary surveys of the Ayodhya site. Results proved to be inconclusive as there was a fair amount of ambiguity around whether or not there originally was a Hindu site, considering the unreliability of Hindu scriptures and oral tradition. It took many years for approval to pass, but in 2003, the ASI was given the green light to perform in-depth excavations of the site. Yet again, anger and tensions stirred between the Hindus and Muslims, with both parties claiming that the ASI was committing sacrilege on holy ground.

Scores of protesters vandalize the mosque

The results of the excavation were stirring. In the five month period of excavation, various teams had made around 1360 discoveries. The 574 page report stated that there was “a massive structure just below the disputed structure and evidence of continuity in structural activities from the 10th century onwards”, thus confirming the existence of an establishment prior to the mosque. In addition, a small seal with connections to the Asokan Brahmi was found, further supporting evidence towards a Hindu structure.

Numerous Muslim groups and organizations disregarded these discoveries and refuted the ASI’s findings. This, again, caused a rift within the volatile social framework of the country, spurring more tensions among the people.

Finally, in 2010, a decision to divide the land between the Hindus and the Muslims was made. Not everyone was happy, but it was the most practical decision and after decades, anger and disputes in Ayodhya had ceased.

Archaeology helped solve this case. By filling in the pre-Mughal void in time that was unknown, archaeology managed to settle any arguments by using scientific methods. At the same time, archaeology nearly sent the country into a massive civil war – it really is a miracle that the ASI managed to emerge out of such a touch situation unscathed.

Open up Google and type in “Doña Sebastiana” and peruse through the images that you get. It’s probably something like this: 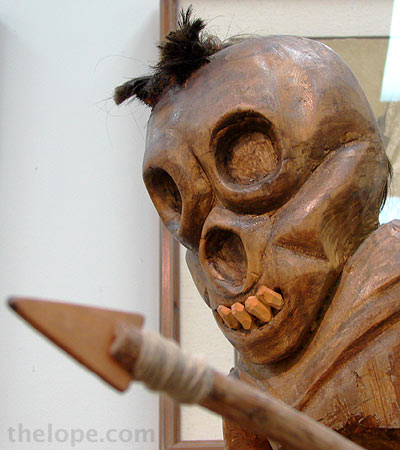 Professor Carlo Severi’s lecture on the connection between art and social memory focused heavily on the relationship between christianity in Mexico and the depiction of Doña Sebastiana. The art and portrayal of Doña Sebastiana is fascinating as it brings about the question of the importance of death in Mexican Christianity. Christianity has traditionally focused on life and rebirth, such as the resurrection of Jesus Christ. Looking at Doña Sebastiana (or Santa Muerte as she is referred to sometimes) gives a completely different impression.

Anthropologically, this is an engrossing topic. To the Aztecs and the Mayans that occupied modern-day Mexico, death was a large part of religion and culture. Human sacrifices were not uncommon and both peoples prayed to their respective gods of death. The Aztecs’ death god was named Mictlantecuhtli, who ruled over all of the dead and was one of the more prominent gods in Aztec religion. The Maya believed in multiple death gods, all of which fell into two basic types: Hunhau and Uacmitun Ahau.

Seems somewhat familiar? He looks almost like Doña Sebastiana! What is so amazing about this is that this is evidence of cross-cultural traditions with respect to the Christian Mexicans and the Aztecs. This reveals how their ancestors, the Aztecs, actually influenced the Mexicans of today. When Christianity infiltrated Mexico and South America in the 17th century, the Aztec and Maya people were supposedly wiped out. With them, most of their traditions were thought to have disintegrated too.

Yet here is proof that the Aztecs did in fact leave their mark on society today. This is where the importance can be placed on social memory – the cultural emphasis placed on death transcended through every following generation and managed to influence the portrayal of Christianity in Mexico.

Now, the cult of Santa Muerte has reached the United States. Through migration and immigration, the belief in Doña Sebastiana has managed to spread across nations, past the United States/Mexican border and into America. Its influence has also extended to non-Latinos, specifically in Louisiana and Northern California.

Just like history has shown us, cultures and traditions carry on through time and location. The social memory of Doña Sebastiana, passed down for generations is a prime example of this, and Professor Severi’s talk on this was stimulating, captivating, and thought provoking.

These are words commonly associated with Christopher Columbus, the Italian explorer sponsored by Spain in the 15th century. His daring voyage across the treacherous Atlantic Ocean nearly cost him his life and the lives of all the sailors on board the Niña, Pinta, and Santa Maria, yet it culminated with him “discovering” the Americas and founding the New World.

How he managed to reserve the title as “founder” of the New World is truly an enigma. North America had been inhabited for millennia prior, by migrants who crossed the Bering Strait in Alaska to Vikings who sailed from Scandinavia and landed ashore in what is today Newfoundland. Even though archaeological evidence indicates settlements prior to Columbus, textbooks today still attribute the discovery of America towards him; and when he traveled back to America, he spurred on one of the largest genocides the world has ever seen.

To refute the common claim of Columbus being the first man to discover America, archaeologists, historians, anthropologists, and students from across the nation have been condemning such history textbooks. Protests appealing against Columbus Day parades shown in Unsettling Columbus Day views Columbus day from the perspective of Native Americans.

This form of anthropology is referred to as “indigenous archaeology”. Indigenous archaeology heavily relies on the perspectives of the native population and uses a more multilinear approach to archaeology in order to gain a more holistic understanding of a society. In a scenario such as the Columbus Day parade, the opinions of the Native Americans play a vital role. Their viewpoints portray a vivid picture of their unified anger towards the celebration of a man who arguably set the ball rolling in the extermination of the vast majority of the indigenous peoples of America.

This country was built on opposition – the colonials revolted against the British and resulted in an independent America. It runs today, as a democracy, on debates in the Senate and judicial system. As a nation, the very concept of being able to stand up for one’s own rights and having an individual voice is fundamental in its constitution. Unsettling Columbus Day displays that very sentiment by showcasing various stances taken by Native Americans on Columbus Day. By utilizing indigenous archaeology, the movie is not only able to bring about different perspectives, but also emphasize emotions and therefore connect with the audience.

Ashmore, Wendy, and Robert J. Sharer. Discovering Our Past: A Brief Introduction to Archaeology

Don the Fedora, holster your pistol, and coil your whip – it’s time for an archaeological expedition… or so I thought. Turns out, fieldwork doesn’t necessarily include dodging booby traps, stealing precious golden idols, or scurrying away from massive boulders. Indy didn’t teach us much about real archaeology, did he?

To start off, there is a ton of preparation work that needed to be completed. Maps and charts had to be at the ready, plotting out the different paths and courses that the team had to take for the initial survey. Along with that, each team carried flags (to mark out artifacts), notebooks, a compass, measuring tape, a GPS device, a dSLR camera, a video recorder, walkie-talkies, and a rangefinder. Each member of the team was allotted a specific role, be it a navigator, recorder, photographer, or videographer.

I was placed in the team which did not have the aid of a mobile mapper, but only an old-fashioned map and compass (which was fine, because Indiana Jones managed alright without technology). Immediately, we had to get our bearings and figure out which direction we had to proceed. As we started to trek through the woods, we took pictures and studied the various artifacts we stumbled upon. Unlike the bones, treasure maps, and precious gems that I had pictured we would find, aerosol containers, beer cans, and old Coke bottles were strewn across the floor.

Surprisingly enough, a simple preliminary inspection of the artifacts revealed a lot more than I had expected. Just by looking at the design of the samples, it was possible to determine their age and purpose. For example, we came across an aerosol can which had been rusted and broken, with the label not visible anymore. It had a jagged plastic ridge that jutted out near the nozzle, which we inferred would be used for upholstery. A rusted can gives so much information once you look deeper

As we continued trekking along the winding hills, our team found manmade stone walls. Using the rangefinder and measuring tape, we calculated the length and height of it them, along with marking out any unusual rocks or discolorations along the walls. After taking numerous pictures and videos, we eventually moved on. A dry stone wall similar to the ones we found

During our expedition, we lost touch with one of the teams. We decided to play it safe and launch a “search and rescue” style mission to seek them out. Even though all of us were confident that the other team was safe and it was just the topography of the hills that was interfering with communications, I was secretly hoping that they had been held captive by evil Nazis and I would have to use my whip-lashing abilities to rescue them. Fortunately, they were perfectly fine and we regrouped for lunch (unbeknownst to us, we had been eating for quite a while under a live wasp nest).

The drive back to campus provided a perfect opportunity to reflect on the day. Archaeology has been a passion of mine since I was six years old, and going on an expedition has been a dream of mine. I would never have expected my first experience to be something like this, but I can say with full confidence that it was a wonderful and eye-opening one. I found out that archaeology doesn’t have to do with bones, mummies, and coffins, but instead it has to do with what we can learn from the items that our predecessors have left behind. Something so small as a beer can to something as significant as a wall can give the same amount of information, but each tell a completely different story.