Posted on May 3, 2018 by hbarrattheitmann 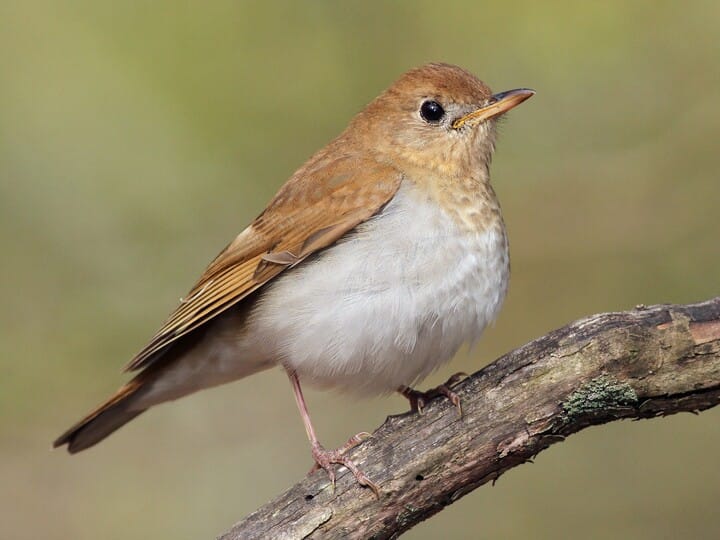 The Veery Thrush has a plump body, round head, a straight, narrow bill, and fairly long wings and legs. From their crown to the end of their tail, Veeries have a bright cinnamon- brown color. Their face and chest have indistinct spotting that lead to a white stomach and pale gray flanks. Veeries also have a faint white ring around their eyes (Veery Identification, 2018). Veeries can range from 6.7-7.1 inches in length, 1.0-1.9 ounces in weight, and 11.0-11.4 inches in wingspan. To identify Veery, its size is compared to smaller than an American Robin and larger than Song Sparrow. There is slight to moderate geographic variation because Veeries found in northeastern and northwestern areas have a darker brown color to them. Between sexes, there is little to no difference in their appearance and sizes (Veery Identification, 2018).

The Veery is a territorial bird. Male birds will arrive to breeding areas in the spring, prior to females, in order to set up a territorial boundary from other Veeries. Instead of using song, Veeries use calls to create their own boundary (Heckscher, 2007). To protect their own territory from other birds, the male Veery will use agonistic behaviors such as chasing, snapping their bills, pointing their bill up accompanied by an upward stance, flicking their wings or tail, and a high pitch whistle (Dilger, 1956). Most of their agonistic behaviors occur between other Veeries; however, they can be used to fend off other species of birds .

The degree of territorial behavior a Veery displays can be effected by the age of the intruding bird and kinship. Mature males Veeries are tolerant of juvenile males nesting in their territory. However, the smaller the territory size, the more likely the mature male will act aggressively towards the juvenile. As for when a male of the same age intrudes a territory, the Veery will vigorously defend (Heckscher, 2007). Tolerance of other birds is also associated with kinship; birds that share a close relationship with a territory holder are less likely to be chased out (Halley et al, 2016).

The Veery primarily forages on the ground and in shrubs close to the ground. This specific thrush species can be seen hopping on the ground and flipping over leaves when in foliage in search of insects, berries, and small fruit. Another method used for foraging is fly-catching, where the bird can be seen hovering in the air in search for insects (Dilger, 1956). During the breeding season the bird’s diet is composed of mostly insects, and towards fall/late summer, the bird’s diet switches to berries and small fruits.

The Veery has a strong preference for deciduous forests in riparian regions (Dilger, 1956). Riparian regions are those located on or near the banks of rivers, and if no rivers are present in a certain location, the Veery looks for wetlands and damp regions. Since this thrush usually spends most of its time on or close to the ground, it sticks to habitats with lots of understory. Habitats with lots of understory have low vegetation, such as plants, shrubs, and small trees. Herb and shrub cover is essential in protecting the Veery from aerial and terrestrial predators. The Veery breeds in southern Canada and tips of northern USA, spreading as far East as West. It migrates down through the Midwest and East coast of the USA into northern South America (Fig. 2).

The previously thought monogamous mating system of the Veery has been rejected and a new polyandrous system is now thought to be correct. (Halley & Heckscher, 2012). Halley and Heckscher (2012) monitored 6 Veery nests, and found that all females tended a single brood, while males were observed caring for nestlings in up to three nests. Five of the six nests studied had more than one male care for the nestlings. This illustrates a polyandrous mating system where the female has more than one mate. However, limitations to this study include that it is a very small sample size and as a result may not reflect the entire species’ mating system. Halley, Heckscher, and Kalavacharla (2016) observed similar patterns in another observational study containing 37 adult Veeries and 21 offspring. They observed both males and females having multiple mates, nests having multiple male feeders, and monogamous relationships. This indicates that there may be some variability in the mating system for Veeries, and one set mating system may not be correct. The female is primarily responsible for incubating the eggs in both polyandrous and monogamous relationships, however, both the male and female contribute to foraging for the nestlings. (Dilger, 1956)

Nests are typically chosen on or near the ground in deciduous forests/woodlands with dense vegetation (Fig. 2). The nests not placed on the ground are rarely seen high up in trees, and are most commonly seen on the tops of shrubs. Hechscher (2004) sampled 31 nests in Delaware, all of which were found on or low in shrubs or otherunderstory. The construction of the nest is completely undertaken by the female and begins with a platform, which is necessary for ground level nests. The nest itself is composed of three layers; an inner layer of fine fibers and wet leaves, creating a cup like shape for the eggs, and the two outer layers consisting of bark and twigs. A key characteristic keeping this nest together are the adhesive forces caused by the use of wet leaves and twigs (Heckscher et al., 2017).