Why do territorial white rhinos kick their dung? A cost/benefit analysis of kicking excrement

If you’ve ever walked a canine past a fire hydrant, you will know that animals use scent to communicate. While your furry friend makes use of his urine to communicate territory ownership, other animals establish dominance via the scent of another bodily waste – feces. White rhinos defecate in communal piles known as middens, often located near territorial boundaries, watering holes, and frequently used paths. These latrines are not for community sanitation as one might think, but rather are sites for territorial males to communicate territory ownership and to search for potential mates. From fecal scent alone, rhinos can determine the age, sex, territorial state, and reproductive status of individual rhinos who have used the midden (Marneweck et al. 2017a). Not only do the rhinos communicate with the scent of their feces, but also with strategic placement of their dung – territorial males relieve themselves in the center of the midden, while females and non-territorial males tend to use the edges (Owen-Smith 1973; Marneweck et al. 2018). There is however one dung-related behavior which, until recently, was not well understood – territorial males scatter their dung by kicking it across the midden. One possible explanation of this behavior is that by physically spreading their dung, rhinos amplify its scent. The team hypothesized that while the dispersed dung would be stinkier, the initial increase in signal strength would decrease the duration of the scent. Marneweck et al. predicted that to accommodate for this potential cost, territorial rhinos would defecate during popular times at the midden to maximize the likelihood of other rhinos getting a whiff.

To collect the dung of territorial rhinos poses a significant safety concern – males weigh up to 5,100 pounds, and will charge horn-first if threatened. Instead, the team collected dung from non-territorial males and measured the emission of volatile organic compounds (VOCs) from both whole and dispersed dung (the odor profile of territorial rhino dung doesn’t differ much from that of non-territorial rhinos, so the replacement was deemed acceptable). These molecules are responsible for the fecal odor and are naturally released from fresh dung. The team first measured differences in odor emissions between intact and dispersed dung, both in total emission and in relative concentrations of specific VOCs. Marneweck et al. then measure changes in emission over time post-defecation, and kept track of when territorial males used middens throughout the day to see if they strategized the timing of their bowel movements.

The results were in support of the team’s hypothesis. Immediately after defecation, odor emission from dispersed dung was significantly higher than that of whole dung. As expected, the strength of the signal from dispersed dung declined sooner over the first 48 hours, while the release of VOCs from intact dung was more sustained at a lower rate. These results suggest a tradeoff – kicked dung initially releases a stronger scent, while leaving dung intact allows for a longer scent duration. Given that all territorial white rhinos kick their dung, it’s safe to assume that the benefits of kicking dung outweigh its costs. Looking at individual components the fecal odor, the team found that dung dispersal increased the initial release of acetophenone and hydrocarbon acids, two compounds known to indicate territorial status. Together, these results support the conclusion that dung kicking is in fact a behavior geared towards increasing the strength of olfactory signals. By amplifying their signals, rhinos are then better equipped to communicate territory ownership to rival males and potential mates. 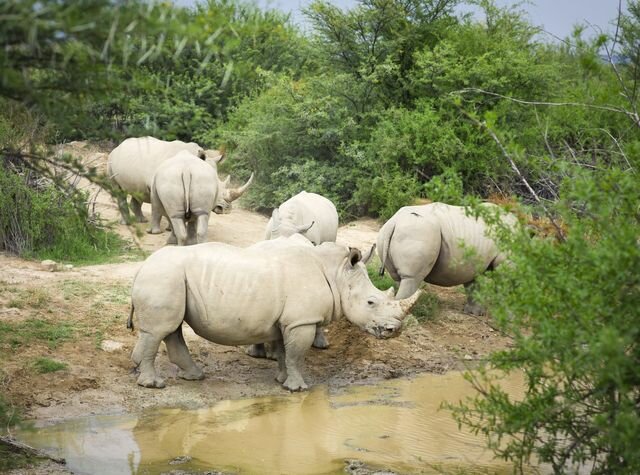 As predicted, Marneweck et al. also discovered that territorial rhinos were strategic in timing their bowel movements – these males were more likely to defecate before and during popular visitation-times at the midden, increasing the likelihood of their shorter duration signals being received by rival males and potential mates. However, the authors are careful to note that we are currently unaware of the threshold at which rhinos react to the smell of dung. It is possible that the decreased duration of the scent is not as costly as we think, and that stale dung can still produce reliable signals. Nevertheless, this result suggests that rhinos strategize not only where they poop, but when they poop as well.

You might be thinking, “Great, Rhinos kick their dung so it smells stronger. Big whoop.” If this is you, think about the evolutionary processes by which this behavior evolved – sensory receptors evolved for specific molecules, neural networks arose to enable a complex communication system, and some rowdy footwork led to a widespread behavior that enhanced communication between animals. I don’t know about you, but I have never found more beauty in bowel movements.