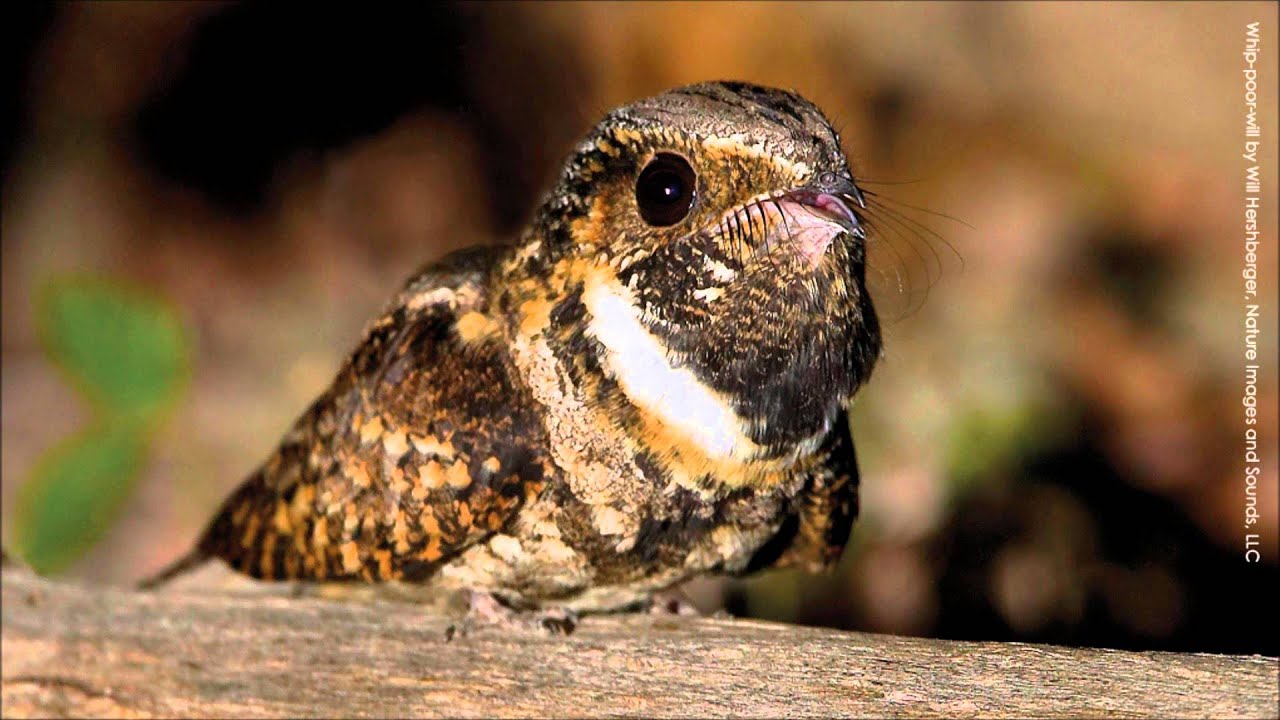 Although not much is known about the Eastern Whip-poor-will’s (Caprimulgus vociferus) song, some studies have been done on its eerie refrain. The whip-poor-will has a variety of vocalizations that it makes including its eponymous whip-poor-will song, a call between mates sounding like quirt, a growl and hiss used in aggressive encounters, and a growl-cluck coupled with a non-vocal wing-clap used in courtship rituals, communicating with chicks when moving nests, and when during nest exchanges for a mating couple (Cink et al. 2017). According to Pitocchelli, no evidence was found of variations in song (dialects) between whip-poor-wills living in four different counties in southeastern New Hampshire (Pitocchelli 1995b). In Birds of North America, however, it is noted that Pitocchelli’s spectrograms of New Hampshire natives differ from the spectrograms used of Ohio birds, perhaps indicating geographic variation between the groups (Cink et al. 2017). Whip-poor-wills are not members of the order Passseriformes which contains most songbirds and, through genetic evidence, it has been determined that whip-poor-wills are not songbirds although they do have songs. Further study is needed to determine whether these songs are learned during life and when or if they are innate. These studies would be extremely important in contributing to the scant but growing knowledge humans have of the thousands of species of birds in the world. By understanding the song function and the development of song in whip-poor-wills, other species of birds’ song functions and development can be better understood and studied with the aid of whip-poor-will song knowledge.

We can better understand the whip-poor-will’s song using a study conducted on Common Poorwills, a related species, in Arizona. The poorwills mostly sang during the months of May to September and sang the most during the full moon and the least during the new moon. It was remarked that poorwills must be cautious in using their song when visibility is low (during the new moon) due to the risk of predation since predators can locate the bird’s location with its call and the bird cannot easily evade the predator in the poor lighting (Woods and Brigham, 2006). Whip-poor-wills are also nocturnal birds that would be subject to these concerns. The role of moonlight in the frequency of whip-poor-will calls is similarly highlighted in a 1981 study done by Robert Cooper in which call counts of whip-poor-wills and chuck-will’s-widows were done to compare the range of their populations in an area in Georgia. During this study, a total lunar eclipse occurred on May 24-25 1975, allowing the researchers to compare three call counts: before the eclipse as the moon was being covered, during the eclipse, and after the eclipse when the moon was uncovered. The results of the call counts clearly showed a decrease in calls as the light from the moon was eclipsed and an increase in calls as the moon’s light was revealed (Cooper, 1981). Similarly, another study was done focusing on the angle of the moon above the horizon and the percentage of the moon face that was illuminated (%MFI) that also indicated whip-poor-wills sing most when more light is available. As can be seen below in Fig. 4, whip-poor-wills sang at the highest rate when there was more light during dawn and also during dusk and high moonlight conditions (Mills, 1986).

Another fascinating aspect of a whip-poor-will’s song is the name humans have given the bird based on their interpretation of its song. A study performed by Hannah Sarvasy focused on three different methods humans have of imitating birdsong: using onomatopoeia (making up words to approximate the song), “non-verbal vocal mimicry” a human uses chirps and whistles and other noises not related to language to approximate the song, and “warblish” (using existing words to describe birdsong). A whip-poor-will’s song is an example of warblish, the main topic of the study, in which people use the words “whip”, “poor”, and “will” to imitate the bird’s song. This study highlights the different intentions humans have in using their language to describe the language of birds. In some societies, birds are given “irrelevant and incongruous warblish, like the Northern waterthrush’s nice old ladies don’t chew” which the study associates with the industrialized nature and “history of colonization” of the society which created the warblish. Other societies more connected to nature use warblish more reflective of the natural world. For instance, two Kaluli warblish for the Chanting scrubwren (Crateroscelis murina) are kalu yabϵ, “a person is coming,” or sei yabϵ, “a witch is coming.” The second indicates danger perceived by the bird at seeing a human walking by who hears their song. The Kalam warblish is cognizant of the season in which the mature Schlegel’s whistler call is heard. They use the words “tw pc pc, “axe chop chop,” which Majnep and Bulmer (1977:84) report alerts people to the season of clearing new farm plots,” (Sarvasy 2016). This analysis of warblish encourages listeners to question the intentions behind the people who assigned such an ominous phrase to the whip-poor-will and invites further study of the human aspect behind a whip-poor-will’s distinctive song. Even though when studying birdsong, the role humans play in interpreting the birdsong is usually ignored or minimized, in this case more study is required to fully understand the context of human society in which the whip-poor-will acquired its name. Such study would be beneficial to understanding the workings of the human mind in naming and interpreting the world and may have some historical relevance to the time English speaking colonists first heard the whip-poor-will’s call. Below are spectrograms comparing the whip-poor-will’s song and a human imitation using warblish. Surprisingly few studies have been done on whip-poor-will vocalizations. An obvious remedy is to conduct many that focus on diverse aspects of the vocalizations. For instance, one study may involve hand-rearing whip-poor-will chicks in order to study how their song develops as they listen to a tutor’s song. This tutor may be a live bird, a recording, a bird of a different species, or even the observed interactions between two adult birds. Such an approach would be most effective for ensuring appreciable amounts of data will be collected for analysis as opposed to naturalistic observation. However, observing fledging whip-poor-wills in their natural habitat would also be a beneficial experiment in order to determine how their song develops under natural circumstances and examine the social interactions which take place in the wild and may affect song development. This observation could be done during the breeding season as well as over the summer when singing is most prevalent. During breeding season, the functions of song may be scrutinized more carefully through intensive study in order to better understand it. Unfortunately, naturalistic observation does not guarantee data since birds do not always return to the area of study but it is much more cost efficient than laboratory studies and allows the birds to behave genuinely with next to no human influence. Additionally, studies should be done comparing the songs of whip-poor-will populations in different regions to determine the existence of dialects and to determine the existence of female song throughout the species. These studies may be conducted in a similar manner as described above.

Woods, C. P. and Brigham R.M. 2008. Common poorwill activity and calling behavior in relation to moonlight and predation. The Wilson Journal of Ornithology. 120: 505-512