Archaeology is a tool the world  can and does use to break down stereotyping. The documentary on Inocente shows how the assumptions on homeless people are tainted with inaccuracies. 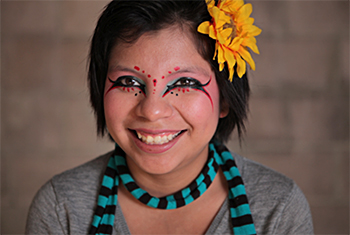 The face of Inocente, most kids in her school don’t know she is homeless. Inocente shows how society needs to rethink about who is homeless

In the first 30 seconds of the film we hear Inocente say that she is a girl who likes to jump in puddles. Inocente is a child. There is a large population of homeless children yet the average person thinking about a homeless person is not a child. 1 in 45 children in the united states will experience a homeless experience. That means over 1.6 million children.

Another important stereo type that is not seen in this situation is that being homeless doesn’t necessarily mean not waking up with a roof over your head. Inocente mentions  the multiple shelters they’ve stayed at  and the small rooms they’ve rented. The main issue is that after staying in a room for too long they won’t be able to pay and have to move because of their undocumented status. The place Inocente’s family stayed in  during the film was in a small garage like building.  Inocente did moved out at one point to get away from her family to work on independency and focus on her art.  Although there are homeless artist that create dismal pieces inocente’s art is the complete opposite. Inocente’s art is modern and surreal, with bright colors and messages of love.  The documentary shows how hard Inocente’s mother works for to supply for her family. This contradicts the stereotype of lazy homeless  people.  Inocente’s mother dreams of a house  where her family can live and call theirs. Inocente brings a new perspective to those who are homeless.

This article is about how Archaeologist are directly learning how to help homelessness.

This thesis tells the history of Washington D.C. and its relationship with Homelessness

This small city of Misis located in  Turkey like most cities is located near water ways. This city was located on the silk road at one point. This city has a rich history and up to 100,000 city inhabitants lived there at one time. Misis now has a population of just a few thousand and is a  small village known as Yakapinar. This city was restored to its former glory with the discovery of mosaics in the Misis mound. These mosaics show the vast amount of animals that were imported into the city. These mosaics show that we still repeat many of the actions of past societies.  One mosaic includes a way of caging poultry the same way the locals still do.

This former city was known as the immortal city, not because of its age, but because of the reference in the Quran where the recipe for immortality was dropped into the river from this location.  Through the recent excavation new mosaics, a stone bridge and the Havraniye Caravanserai were unearthed. The Havraniye Caravanserai is a center for commerce; the only thing that remains of it now is the large gate to its entrance. The excavations show how the city has changed hands so many times. The artifacts found are from the Neolithic, Roman, Byzantine, and Armenian eras.

Misis is similar to modern cities such as St. Louis and Detroit which were at one point large economic centers  and are now decreasing rapidly in population. The village of Yakapinar was also a huge economic center but the population fell due to external conflicts such as the crusades and the city being burned down.

The government of Turkey has set up plans to keep the village and area alive by giving out incentives to maintain normal life there as well as build new housing complexes to allow people to move back to this area. The head archaeologist believes that this will be a hot spot in tourism because of the variety of different cultures that have influenced the area over time. The only Mosaic known to show Eros in this manner

The mosaics discovered from this excavation as well as the original ones in 1956, show what the culture at that time felt was most important.  There is a Noah’s Ark mosaic, and one of eros the greek/roman god of love. The mosaics and the Roman and Byzantium ruins hold a lot of aesthetic value which unfortunately cause their true meanings to be forgotton.  The latest digs discovered more about the culture and the extent of the city’s history going back past the fifth millennium. The original excavation in the 1950’s appears neglected everyday life and why the city fell, and instead appreciates the aesthetic value of these ruins. This is the ruins of the market place of Misis

From text it seems that the reason this city was able to survive for so long was its stable economic location.   Its proximity to a river and the Mediterranean and to the middle east (Israel) allowed for this city to maintain a strong economic center with multiple markets.  The small village still has modern inhabitants just like the desolate cities of the American Midwest. This “immortal” city of Turkey shows how archaeology should be able to help understand how cities rapidly fall in population, but with the original excavation more focused on aesthetic value, it is the recently discovered artifacts and ruins which will help us correct the past mistakes and help us understand what life was like in this economic center and how the external conflicts caused the population to decrease.

Observations on the Samson Floor at Mopsuestia; This article  not only gives a good history of the city but goes into detail about some of the mosaics discovered. http://www.jstor.org/stable/1291337?seq=3

Marxist Archaeology was a field created in the early 20th century by soviet archaeologist in which they started questioning archaeological sites with the class struggle and unfair business practices. Vere Gordon Childe was the most prominent Marxist archaeologist when the field was first formed it was his love with socialism that transferred over to his works in archaeology. Man Makes Himself and What Happened in History are Childe’s most prominent works in literature. Childe is also famous for his excavation of Skara Brae, a Neolithic village of the Orkney Islands. Marxist archaeology resurged in the 1980’s with Post Processual Archaeology.

Skara Brae was discovered when the ocean sea waves and wind unearthed the former stone village.

Social classes are not a modern idea, there have been hierarchies in cultures ever since the  original chiefdoms. The unequal distribution of wealth/resources what is considered a natural phenomenon comes with other consequences to those who are found lower on the pyramid. Application of Marxism can be seen in an excavation of the roman city of Dorset, in Great Britain, examined 291 bodies of all classes to determine the demographics of that area. The findings are not surprising those who were of high class has a decrease in chance of fallen sick compared to their poor counter part. The lower class had a lower life expectancy and the infant mortality rate was increased for those of the lower class versus the higher class.  These examinations were non-bias as the bodies were of all age categories.  This also covered the timespan of 400 years from the first century C.E to the Fifth century C.E. So what can this tell us about today well if you look at what the western world considers a developed and undeveloped nations we can see that the infant mortality rate between the two haven’t changed for over 1500 years!

Another example of Marxist Archaeology is with the Aboriginal southwest &northwest in the united states. The original Archaeologist studying these areas felt that they were considered chiefdoms, that never got out of a middle barbarism state. The first fault with this idea was the fact that the elite lived in grand houses while the rest lived in brush huts.  The research shows that the pueblo people are not exactly like their former ancestor and have an increase communal order then their predecessors.  The complex hierarchies of the original Aboriginals seemed to have diminished once the Spanish reached them. This interference is why their culture went from a complex system to a simpler egalitarian system. This is important because if this can occur  than that means that this successful structure can occur with other societies/cultures as well maybe even ours.

In a paper  “Reflexiones Acerca De La Arqueologia Social” questions the conservatism of excavations and  argues that  just  looking at what the upper class  have prevents us from truth. The authors believe that we must study the working class of a civilization to learn about the truth of their culture as a whole. These authors also believe that in doing this way we can help relate these to our own socioeconomic problems through the artifacts discovered in past cultures.