Cidade Velha, former capital of the Cabo Verde Islands off the coast of West Africa, is home to a 500-year-old secret—a church, buried and left in ruins for hundreds of years, has been recently excavated and recognized as “the oldest formal European colonial building” discovered in sub-Saharan Africa to date (Cambridge). However, the mystery surrounding it is rooted in something much darker.

Colonized by Portuguese settlers, Cidade Velha was once a booming port city that owed its success to the slave trade, functioning for over 300 years as a holding point before slaves were sent to Portugal and the Americas (Phys.org). The previously mentioned Portuguese church, upon its excavation by a team from Cambridge University, was discovered alongside a massive cemetery of about 1,000 bodies. Interestingly enough, at least half of these bodies buried in Christian tradition were African, and presumed slaves (Discovery). These graves give rise to evidence of religious conversion of locals by the Portuguese settlers, and begin to raise important questions about Cabo Verde’s history that haven’t yet been addressed. The teeth and bodies of the dead have the potential to be examined in order to provide a deeper context of slaves’ diets and living conditions, as well as provide an objective truth about what life was really like in Cabo Verde in the 1500s as a result of colonization.

The excavation of this church in particular was an effort by Cambridge University that successfully began to rewrite the story of the Cabo Verde Islands and clarify a national history long-shrouded by the lingering remains of colonialism, slavery, and religious conversion. It is important to note that archaeologists from Cambridge collaborated with local workers on the excavation, making it a truly community effort. The digs were also made public and generated an immense amount of interest and support from locals.

The stories of Cabo Verde are now being claimed by the Cabo Verdeans, and rightfully so. Archaeological excavations such as this slowly but surely strip colonialism of its power over history’s narratives and let us remember history as it was, not as a dominant power structure wanted us to believe. This is a long-overdue reclamation of power, and it gives depth to local heritage, culture, and pride. “It’s a profound social and political story to which these new archaeological investigations are making an invaluable contribution,” says Marie Louis Stig Sørensen of Cambridge, and she’s absolutely correct—through archaeology, a local community can reclaim the ability to tell their own stories, and that is undeniably powerful.

Uncovering the first European church in the tropics – YouTube

One of history’s greatest murder mysteries—the sudden, inexplicable death of a powerful warlord—remained unsolved for centuries. What was it that finally cracked the case? Archaeology, feces, and centuries of waiting.

Can Francesco della Scala (1291-1329), more commonly known as “Cangrande,” was born into the immensely powerful della Scala family, a majorly influential political force in 13th and 14th century Verona, Italy. He was a feared warlord, friend and host to Dante Alighieri (author of the world-renowned Divine Comedy), and soon rose to become the most influential man in all of Verona.

Della Scala then won control over Treviso, Italy: this was a massive military accomplishment, and the “last act in Cangrande’s long struggle to control the entire region of Veneto in northern Italy,” (Discovery). Immediately after this momentous success, he fell terribly sick and died at the young age of 38. Why?

The official cause of death was due to a polluted spring that Cangrande seemingly drank from, but rumors of his being poisoned began to spread. The entire ordeal was a mystery, and remained that way for centuries; in fact, it wasn’t until very recently, when his body was found by a team of archaeologists in 2004, that the pieces began to fall into place. 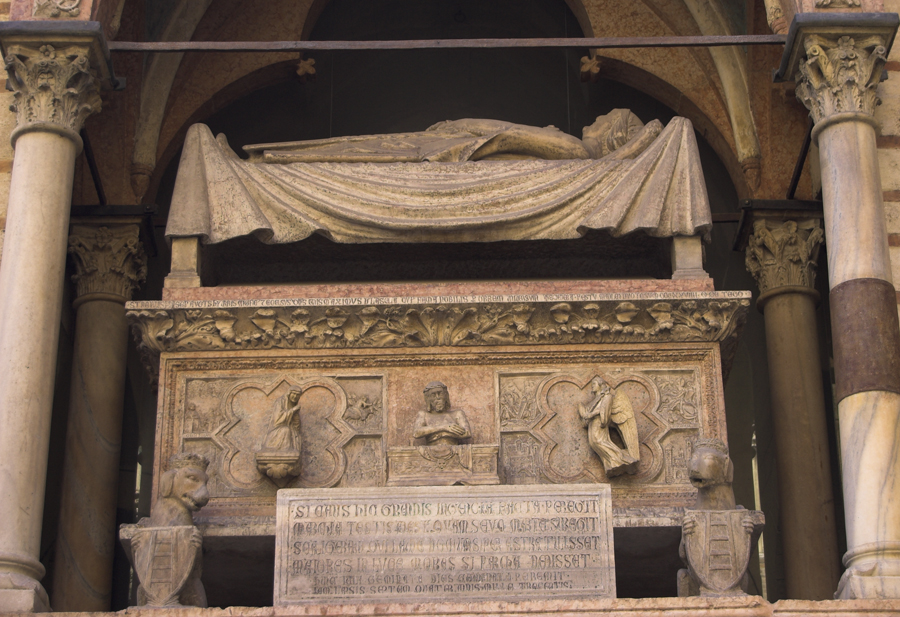 The role of archaeology in uncovering mysteries such as the murder of Cangrande is absolutely integral—by looking at stomach contents, fecal material, and tooth decay, archaeologists are capable of turning centuries-old rumors into a historical narrative that we can learn from today.

Upon closer examination of the great Cangrande’s body, signs of arthritis, recently regurgitated food, tuberculosis, and potential cirrhosis were discovered, but nothing pointing to his mysterious death was found—until the team began to look at what he most recently consumed before his sudden demise. Timeline of Autopsy: a.) Stone cover of the sarcophagus b.) Body upon immediately opening stone cover c.) Body wrapped in burial clothing d.) Body at beginning of autopsy

Samples of feces were taken, and analyses showed the presence of chamomile, mulberry, and foxglove, also referred to as Digitalis. Foxglove can cause “gastrointestinal distress, drooling, and…seizures,” and is highly lethal in larger doses (Smithsonian).

Archaeologists were then able to deduce that Cangrande must have been given a deadly amount of foxglove, most likely disguised in a chamomile tea. It is highly likely that this was done to suppress the warlord’s rising and seemingly unstoppable power in Verona and northern Italy. Whether it was done by a political or personal enemy, it isn’t clear—this may be the next age-old mystery for archaeologists to crack.

Scholarly Article and Autopsy by Paleopatologia