Warfare has always been more about eliminating a culture versus killing the people. Attacking a cultural site is an effective way of hurting an entire population without actually killing anyone. Today, many terrorists groups are using this method to inflict pain on different regions of people. However, this is not a new phenomenon; British and French forces used this same technique in China during the end of the Opium War in 1860 which, “was a moment, says one scholar, that ‘changed world history’” (Bowl).

The goal of the Opium War was to force Chinese imperial rulers to open up trade for the west. The British were under the command of 8th Earl of Elgin. His close friend, Thomas William Bowlby of The Times, was a reporter and when he tried to meet French and British officials for peace talks, Bowlby and company were captured by the Chinese.

Meanwhile, French and British troops arrived at the Summer Palace near Beijing. The Summer Palace “integrates numerous traditional halls and pavilions into the Imperial Garden conceived by the Qing emperor Qianlong between 1750 and 1764” (Centre). This site has a long history and is an integral part of the Chinese culture, so when the French and British arrived, they immediately began to loot the site. Elgin, the leader of the British wrote “‘War is a hateful business. The more one sees of it, the more one detests it’” (Bowl).  This did not stop Elgin from auctioning off all that had been looted though.

Back to Bowlby, the delegation sent to negotiate peace had been taken prisoners, tortured, and killed. This enraged Elgin, who then sent orders to his troops to burn the Summer Palace to the ground in retaliation.

Gate in ruins of the Summer Palace

This does not justify actions of such destruction to a culture. The Chinese were  preoccupied by political uprising for many years, but now they can finally return to their history and celebrate their story and artifacts, or in this case lack there of. The grand Summer Palace’s artifacts are spread out all over the world. There are efforts to bring these looted artifacts home, but it is a delicate process. There is great resentment around wealthy chinese purchasing their stolen heritage at auctions and at the Royal Engineers’ museum in Kent, deputy curator James Scott says, “‘We don’t actually mention the word loot at all. We try to keep the interpretation as neutral as possible’” (Bowl).

This is where archaeologists are needed. The origins of some of the artifacts being sold are disputed, but just because the site was burnt down, does not mean that the context can’t be used to help indicate where and when an artifact was created. This leads to greater ethical questions. Should China have to purchase its own heritage back? Looting occurs on a global scale and eventually, must be addressed. Hopefully with the work of archaeology and the corporation of different countries, all cultures will be able to properly celebrate their heritage. Recently, the New York Times released an article about the discovery of a Viking warrior in Stockholm. The reason this made headlines: the warrior is believed to be a woman. The article “A Female Viking Warrior? Tomb Study Yields Clues” by Christina Anderson delves into what was found and how this may challenge our view of the Vikings. Anderson reports that some of the researchers believe “‘women, indeed, were able to be full members of male-dominated spheres’” (Anderson).  In the tomb, scholars found a warrior’s grave furnished with knives, axes, swords, spears, shields, and even two horses. On her lap, there was a hnefatafl or King’s Table signifying her high status and her great ability for making strategic decisions. To many scholars, this find means many of the women warriors deemed a mythical may have actually existed.

This find is part of a larger wave of what many are calling feminist archaeology. The objective of feminist archaeologists is “exposing and correcting the male bias” (Renfrew). While this action is needed, the scholars in Stockholm investigating the tomb may need to take a step back. Anderson reports other scholars’ outrage over the premature report. Notably, Judith Jesch, a Viking studies professor at the University of Nottingham in England, shares her outrage. Jesch believes the grandeur of a female warrior may be clouding their judgement.  Jesch also points out many things that were not considered, Anderson reports: “bones of various people might have gotten mixed together given that 130 years have passed since the original excavation; the inference that the board-game pieces suggest a high-status female warrior is too speculative; and alternative explanations for why a female body might have ended up in a warrior’s tomb.” Clearly further research must be done and other options must be regarded.

However, there are plenty of indicators that females in Viking society did have more respect and power than in typical European societies at this time. Jesch writes in her book Women in the Viking Age, “women could have great wealth and standing in the community… women could be merchants or craftspeople, working alone or as partners of their husbands” (205). Other writings concur with Jesch. Social Scandinavia in the Viking Age by Mary Wilhelm Williams also looks at women in Viking times. Williams explains “they enjoyed more independence than any other women of contemporary Europe” (109). Further, Williams says women were given the same schooling and were adequate partners for their husbands. Women in the society were well “honored and respected” (Williams 109-110).  This time period for women was not perfect, but they did have some luxuries. 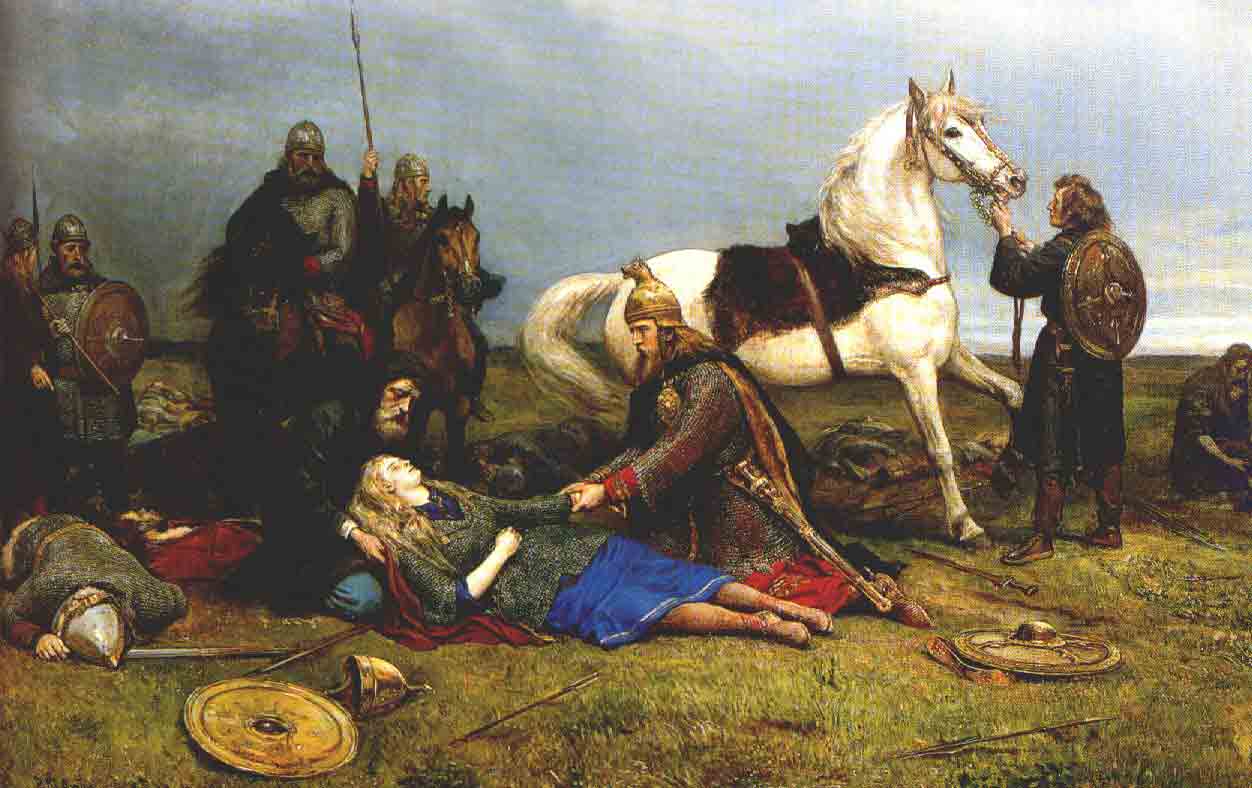 Painting of the death of a female Viking warrior (Laskow)

Yet there is no indication of female warriors. Some stories had powerful goddesses and impressive female warriors, but these have been dismissed by many as only myths. Some art produced at this time included powerful women, but again these are accepted as depictions of myths. Thus the findings of a woman warrior may be too good to be true.

That said, the work done by the scholars in Stockholm investigating the burial of a warrior they believe to be a women is important. Archaeologists need to question the past and need to correct the possible biases of past researchers. On the other hand, archaeologists must not become overly sensitive to past biases themselves. The scholars may not have went to the Viking burial expecting to find a women buried like a man, but when that was what they found, they stopped questioning. They might be correct in their findings that there were female viking warriors; however, all evidence must be taken into account. Further research is needed.

Pruitt, Sarah. “What Was Life Like for Women in the Viking Age?” History.com, A&E Television Networks, 18 Nov. 2016, www.history.com/news/what-was-life-like-for-women-in-the-viking-age.

Hansen, Evald. “A 19th-Century Illustration of the Contents of the Tomb, Which Was Quickly Identified after Its Discovery as That of a High-Ranking Warrior.” The New York Times, The Swedish History Museum, 14 Sept. 2017, www.nytimes.com/2017/09/14/world/europe/sweden-viking-women-warriors-dna.html?_r=0.