“Well, everything we use on “Bones” is real – the technology, the methodologies, the terminologies. What’s different is that in real life every single case does not get solved. You don’t find that, you know, sliver of skin cells in an acre of grass that cracked the case open. You – we won’t make mistakes on our show like having your DNA results in 12 minutes, that sort of thing.” Reich stated in a 2012 interview with NPR. Reich also acknowledges that the advanced equipment shown in the Jeffersonian labs, while real, is not available to most forensic anthropologists, as in the case of the “Angelatron.” 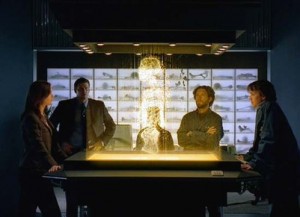 Angela virtually reconstructs the skull and then face of Cleo Louise Eller in Bones season 1 episode 1 according to Brennan’s instructions using the “Angelatron.”

Reich says, “it’s a three-dimensional holographic reconstruction apparatus, and it does exist. Now, have I ever been in a crime or medical legal lab that has one? No. It’s expensive.” Of course, the admittedly drool-worthy technology isn’t the only area in which the show fudges the facts for dramatic effect. Even with a display like this, a forensic anthropologist can rarely determine race with certainty from only a skull– Brennan’s big genius trick from the first episode of the series. Certainly they wouldn’t be able to assume the victim’s actual appearance with such accuracy (though this, too, is an actual practice sometimes used in criminal investigations, known as forensic artistry). As I and the other students of Professor Beisaw’s ANTH 100 class saw for ourselves last Thursday, race is very difficult to assess, because it is a social construct rather than a scientific category.

The earlier seasons, and the first episode in particular, suffer fewer inaccuracies than later episodes (most likely because of the show’s gradual shift from cranial reconstructions to conspiracy theories). When Brennan and her assistant, whiz kid Zack Addy first see the victim’s body, the skull is in pieces, but the rest of the skeleton is intact, so Brennan’s analysis of the victim being “a young woman, probably between 18 and 22, approximately 5’3, race unknown,” is no major leap; as Addy explains to Booth, “epiphysis fusion gives age, pelvic bone shape gives sex.” Hey– those are both real methods of determining age and sex!

Now, most forensic anthropologists spend most of their time analyzing bones only to discover that it’s a bear paw rather than a human hand. Those that do see human remains rarely see them in the context of a murder investigation. Within that small group, it is even rarer that the forensic anthropologist is present at the scene of the crime. Brennan does her first analysis of the body crouching at night, in low light, at the scene. Sorry, for those of you who thought forensic anthropology meant palling around with cops and teaming up with a hunky FBI agent to form a crime-fighting duo. Remember, this is fictional. But don’t discount everything you see– as it turns out, some of the forensics in Bones are downright realistic! Who would have thought?

If you’re interested in learning more about “forensic artists”: https://blogs.funeralwise.com/dying/2012/11/02/solving-murders-and-sculpting-skulls-interview-with-a-forensic-artist/

The most and least scientifically accurate Bones episodes: http://www.forbes.com/sites/kristinakillgrove/2015/06/11/forensic-anthropology-on-tv-five-most-and-least-accurate-episodes-of-bones/2/

And an analysis of the inaccuracies in the details of forensics shows: http://test.uanews.arizona.edu/story/debunking-hollywood-myths-about-forensic-science