At first glance, a pet cemetery may be seen as a place that solely remembers an animal and its relation to a human. A refined archaeological approach develops understanding that a pet cemetery says as much about humans as it does pets. Hyde Park in the United Kingdom is the oldest pet cemetery in the nation and has over 1,000 pet remains (Aridi 2020). Burials display a shifting relationship between humans and their companions, with funerary practice changing from remain disposal to a sustained grieving period in the UK after World War II (Aridi 2020). The relationship between humans and animals, in the form of pets, can be seen in the archaeologically observed monuments and remains. The UK saw a shift to pet-keeping in the late 18th and early 19th century that gave way for a relationship that included emotional attachment, illustrated through the burial of Cherry the dog. Before 1881, elites would hold funerals or formal burial for pets, but Cherry’s owner asked for the dog to be buried in Hyde Park (Tourigny 2020). Careful observation of the cemetery that has since expanded vastly allows for archaeologists to examine even the shifts in the gravestones themselves since inception. Comparable to human burial ground examinations in many cases, monuments and stones have been moved in the pet cemetery, but much is still able to be revealed.

The early 20th century assessment of Hyde Park illustrates a shift in familial attachment to pets. After World War II, use of family names in addition to the pet’s name on a monument, as well as references to father and mother, became evermore apparent (Aridi 2020). This marks a greater public display of pets as family members. A similar change in the cemetery’s narratives was the incorporation of religion on tombstone’s, alluding to a deeper level of companionship following the Second World War (Aridi 2020). The cemeteries, therefore, become indicative not solely of how a pet behaved but rather how the pet shifted the behavior of its human owners. Figure 2. Mr. Twister and Raspberry are buried in the Presidio Pet Cemetery in San Francisco, California with a note from their “father” Ken. (California Pet Cemeteries)

Examining early pet cemeteries for shifts in human actions is incredibly useful for the determination of shifts in human behavior. Archaeological examination allows for an understanding of behavior rather than broad generalities on a pet’s honorary epigraph. Through surveying and excavation of sites, visible shifts in specific cultural approaches to funerary practices for animals can be observed through monuments and grave sites. The assessment must be done that not only does human interaction affect animals that have been domesticated, but that the animals also play a key role in a shift in human behavior.

Preservation of artifacts can be in a plethora of forms. For the Ozette Site in the Pacific Northwest, mud encased the whaling village dating back to 1700 CE (Renfrew 2018, 58). The Makah tribe’s tremendous history was revealed around 1970 following a weather event in Washington that began to reveal artifacts from the nearly 2000 year old whaling village (Renfrew 2018, 58). Ozette displayed past environmental and natural events, along with a deep history of the people that lived on the land. Figure 1. Rocks surrounding the excavation site display carvings dating back to before the mudslide of the Ozette Site in 1700 CE (Sainsbury 2022)

Ozette brings to light many key archaeological lessons to take as the examination of further Indigenous sites continues. Washington State University had been examining archaeological sites near the Makah’s land since the 1940s, but their breakthrough 20 years later was incomparable (Washington State University 2022). Richard Daugherty, an archaeologist from Washington State at the heart of the excavation and examination of the site for 11 years, prioritized a close relationship with the Makah (Washington State University 2022). This was to ensure both respect and care were taken with preserving and eventually displaying the tribe’s history. The way the artifacts were preserved must also be viewed. Mud worked to encase the history of the whaling village with six cedar houses and tens of thousands of artifacts (Sainsbury 2022). Wet clay surrounded the pieces of the thriving whaling village and acted as a sealant, keeping out air and protecting the pieces from erosion. 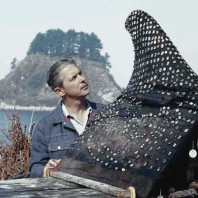 Figure 2. Richard Daugherty carefully examines one of the most important artifacts recovered from Ozette, a wood carving of a Whale’s fin (Washington State University 2022)

Crucial to the excavation in Washington was the relationship with the Indigenous peoples of the land. The Makah assisted Daugherty with the cultural context of many pieces that the team could not initially understand (Knight 2015). The relationship between the team and tribe went both ways, with Daugherty and his team working to not only preserve history but to help the Makah find what they previously thought to be lost. From the outset, the tribe was determined to display their artifacts on their land for generations beyond them to see (Sainsbury 2022). In this vein, around 500 pieces are currently on display within a museum that remains on Makah land and serves the local community and those that choose to visit (Sainsbury 2022).

From the excavation of the site and the initial discovery, Ozette teaches us about how archaeology can teach and preserve. Approaching the site in a way that serves the Makah is important for archaeologists to mirror. It must be understood that the work is community-focused, rather than for name recognition associated with a dig or discovery.

Some pieces to view for further discovery: