While what usually comes to mind at the term “mummies” are any of the Great Pyramid Pharaohs, there exist lesser known and better preserved ancient humans. Bog bodies, or “peat mummies,” are extremely well-preserved human remains found usually in Northern Europe. These bodies, located in a wetland that accumulates peat, are exposed to an extremely acidic yet stable environment for long periods of time. In addition to this acidity, the bogs possess low oxygen levels, low temperature, and low water levels. The presence of these conditions allows the remains to be well-preserved, the organs, skin, and hair often intact. However, prolonged exposure to such high acidic levels eventually dissolves the calcium in the bones, a feature which distinguishes bog bodies from other type of mummy.

An example of a bog where the bodies are commonly found.

Although bog bodies can be dated from B.C.E to as late at World War II, the bulk of bog bodies found falls within the time period of the Iron Age. The Iron Age, beginning in Europe around 300 B.C.E., is characterized by the widespread use of iron as the dominant tool making material. However, in Northern Europe this period was also characterized by extremely violent practices. Many of the bog bodies recovered from the iron age how signs of strangulation, bludgeoning, stabbing, disembowelment, asphyxiation, and poisoning. The bogs, it seemed, were reserved as dumping grounds for those who had either been brutally murdered or offered as a human sacrifice to the gods. While the demise of those in the bogs is often tragic, they leave behind many clues indicating how their people lived, what they worshiped, and how they died.

The Tollund Man, one of the most well-known bog bodies, was found in a peat bog close to Bjældskovdal, Denmark. Approximately 30-40 years old, he lived during the beginning of the Iron Age in Europe. While most of his entire body was free from decay, the degree of preservation in his face and facial features is remarkable. The expression the Tollund Man had at the time of his death is still visible- an expression that is eerily peaceful due to the violent nature of his death. Among the Tollund Man’s belongings was a cord tied around his neck, which indicateds he was most likely a victim of hanging. While the body itself is telling, much can be learned about how he lived from studying the “larger picture.” From excavating the area in and around where the Tollund man was found, many artifacts were recovered that outlined how people from ancient Europe functioned as a society. For example, an elaborate leather cap was found, boasting both a conical shape and a braided loop fastener. This cap indicates that his people were skilled artisans, capable of producing complex and robust items of clothing. In addition, by excavating the surrounding areas, it can be concluded that the Tollund man  was most likely a human sacrifice, due to similar nature of the deaths of nearby bog bodies and the absence of funeral urns- urns that were usually used for burying the dead during the iron age. This strongly indicates that his civilization possessed an element of religion. Finally, grain was found in his stomach, revealing that his people were semi-sedentary agriculturalists who lived off of a diet of cereal grains. 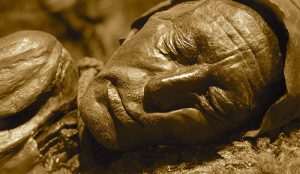 A view of the Tollund Man’s well preserved facial features.

By studying the Tollund man and other bog bodies, we are able to see how they once lived. However, we must be careful not to make assumptions based on our own experience of what it is to be “human” in order to fully understand ways of life other than our own. While the life of bog bodies like the Tollund man may seem barbaric, upon closer inspection their societies possessed many elements similar to our own ways of life today. The major difference between our civilization and the bog bodies’ civilizations is mainly the time in which they occurred.

15 Legendary Mummified Bodies & How They Got There