The Bronze age began 3300 BCE in the eastern Mediterranean and lasted until 1200 BCE when efficient iron smelting brought forth the dawn of the Iron Age. During this period copper and tin were smelted together to create bronze, an alloy stronger than its components and easier to create than refining iron. However, there is an unresolved question. Tin is not native in large quantities to eastern Mediterranean. Therefore, where was the tin mined? 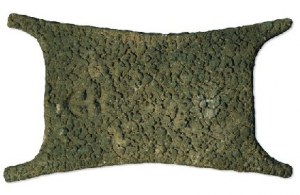 An ancient tin ingot to be used in the creation of bronze.

With the advent of trace-element analysis, in which artifacts are sampled for specific rare elements, archaeologists are able to cross-reference the trace elements found in artifacts with naturally occurring concentrations across the world. For example, at shipwreck near Haifa, present-day Israel,  numerous tin ingots, with Minoan symbols indicating ingots are from the bronze age, had trace elements of cobalt. Archaeologists must now find a source of tin with similar traces of Cobalt to determine the origin. Yet, they have failed to find an exact match, the closest being Cornwall, present-day England, which has concentrations of cobalt and germanium.

In addition to trace-element analysis, written sources can help narrow the tin’s possible origin. The famed Greek historian Herodotus speaks of tin originating in “the tin isles” which is thought to be the English Isles. This tin would be exported to Minoan Crete for processing into bronze. Although his claim does strengthen the possibility of a source of tin in northern Europe, Herodotus wrote his theory of the origin of tin almost a five hundred years since its primary use and admitted that he lacked an eyewitness account. Only until the Roman empire conquered the Isles did both written sources and trace-element analysis provide concrete evidence that northern tin was used in bronze production.

Ultimately, a spatial distribution of assemblages containing tin would provide the most concrete answer. Both tin and amber are commonly found in north-western Europe, but very rare in Mediterranean. Excavations in Minoan Crete and Cyprus 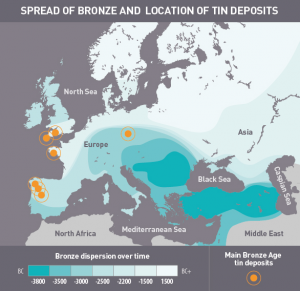 found jewelry made of tin and amber beads revealing a trade network between the two locations. A fall-off analysis, an analysis which shows how the quantities of traded goods decline as distance to the source increases, indicates that a down-the-line exchange system carried the tin south through present day France before Minoan merchants brought the tin across the Mediterranean to Crete. Therefore, it is probable that a route did from northern Europe did supply at least the Minoans with a source of tin.