Tollund man, discovered in a bog in Denmark in 1950, is so well preserved that the two brothers who found him thought he was a recent murder victim. Based on carbon testing, he lived during the Iron age and died around 3-400 BC aged 30-40 years. After being hanged he was laid in the peat bog in a sheepskin cap, a belt, and a noose tied around his neck. Instead of decomposing, the peat moss killed bacteria and prevented the decomposition of the body. 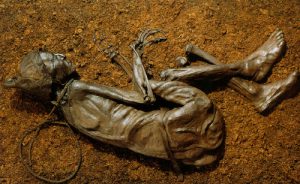 Ever since Tollund man was found, both archeologists and the media have debated and posed questions about the manner of his death. Superficially, the circumstances of Tollund man’s death seems to correspond with a section of Tacitus’ later description of the Semnones, a germanic tribe. He wrote in the second century, that, “They hang traitors and renegades in trees, cowards, combat evaders (afraid to go to war) and unnaturally immoral people they lower into filthy swamps and cover them with branches”(“Why Did He Have to Die?”). However, Tacitus was writing about 400 years after Tollund man was left in the bog and Tollund man’s burial does not seem to line up with the burial of a criminal. Archeologists have pointed out that he was placed in the bog in a sleeping position. It is also likely that those who buried him closed his eyes and mouth after death. Because of this his death is often seen as a sacrifice to a god. Other bog bodies do not show the same special treatment that Tollund man’s does. The bodies of Kayhausen boy (500-100 B.C.) and Yde girl (54 B.C.-128 A.D.) may have had physical deformities that ultimately led to violent deaths. Yde girl’s hair was also shaved on one side a sign that she might have been an adulteress (French). 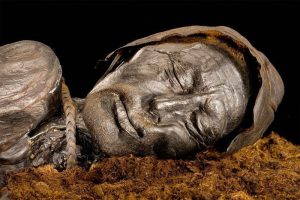 Though Tollund man was likely put in the peat bog to be forgotten, either as a criminal or more likely as a sacrifice to the gods, it was this location that insured his preservation. Bogs are treasure troves for modern archeologist, and the artifacts recovered from them can often reveal information about people’s lives that would not otherwise survive. Bodies are not the only things found in peat bogs, archeologist and locals have also found jewelry, weaponry, battle armor, farming equipment, and even butter (French). In the peat surround the Tollund man two peat spades and a wooden walkway were also found (“The Bog Where the Tollund Man Was Discovered”). Reconstructed image of peat cutting during the Iron age, when Tollund Man would have lived. The existence of these artifacts also point to the important role that peat bogs also played for ancient cultures. It has been argued peat bogs, were seen as ‘gateways to the spiritual world’ as well as a source of fuels, as it is still seen today (French). All together the bog artifacts can indicate what peat bogs meant to Iron age cultures and can help unravel the continued questions that the Tollund man and other bog bodies pose. 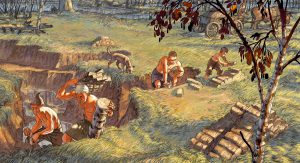 Reconstructed image of peat-cutting during the Iron Age