Natural disasters are categorized as devastating events in nature that occur abruptly and often with terrible ramifications.  Violent storms, mudslides and volcanic eruptions have been the cause of destruction in many an ancient civilization, often leaving behind no trace of the people who inhabited them.  However, in a bit of an ironic twist, these same circumstances are what have preserved many ancient cultures for hundreds and, in some cases, thousands of years.  One such example of this is Joya de Cerén, the literal translation of which is ‘The Jewel of Cerén’. 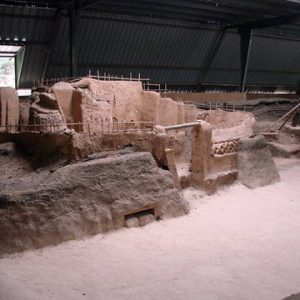 One of the buildings uncovered at Joya de Cerén

Located in present day El Salvador, Joya de Cerén was a pre-Hispanic farming community that was active during the Mayan Classic period (A.D. 300-900).  This archaeological site was preserved in the same way as the famous Italian city of Pompeii.  Around 600 A.D. a nearby volcano, Loma Caldera, erupted and covered the surrounding area in thick layers of ash and other volcanic debris.  This natural disaster acted as a natural preserving agent that protected the architecture, artifacts, ecofacts and even the fields used by the ancient farmers.  All of which was still as the inhabitants had left them while fleeing.  As much as this site was a miraculous find for archaeologists with its remarkable level of preservation, it was made even more unique due to the fact that the area was largely non-elite.  For the most part research into Mayan culture has focused on the rich and elite of society as their marks have stood the test of time more easily than that of the general populace. 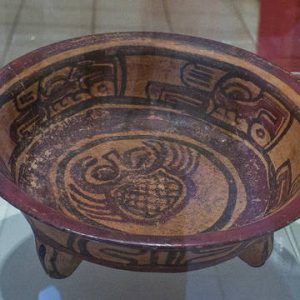 An piece of pottery recovered from Joya de Cerén

However, Joya de Cerén gives the world a rare view into the lives of common ancient Mesoamerican farmers.  The layers of volcanic ash allowed for the preservation of the architecture and artefacts of the ancient site that were left ‘in-situ’ or in their original positions of storage and use.  The personal dwellings give us a clear picture of the day-to-day lives of an ancient Mesoamerican farmer.  Religious items, animal remains and even the sleeping mats have been preserved, all ordinary items at the time that would seem to have no large importance on their own but provide much valuable information together (Joya de Cerén Archaeolofical Site).  Several other types of structures have been preserved as well, such as religious and community buildings, storehouses and even a sweat bath.  The fields were also well preserved and show what kinds of foods were the staple of these ancient people’s diets.  These structures and their intact contents give detailed information about how the village functioned as a community, their beliefs and traditions and even their dietary practices.  Again all features that might seem meaningless to the average person, but allow researchers to gain a clearer understanding of the life these ancient people lived and how that relates to the people in the present.