You don’t have to solely follow pseudoarcheology to get all the thrills and compelling stories, such as the possibility of aliens on our planet. Bioaracheology and forensic anthropology can provide captivating stories in regard to the cause and time of death of humans from the Holocene (10,000 years ago) to the present, without the gross exaggerations created in pseudoarcheaology. Bioarcheaologists and forensic anthropologists are specialists in human osteology who use theory and method of biological anthropology to answer questions about how recent humans lived and died. Largely born from the practices of New Archeology, it advocates using processual methods to test hypotheses about the interaction between culture and biology, or a bio-cultural approach. Due to the fact that the shape of skeletons of humans and other animals is dictated mostly by its function in life and its evolutionary history, bioarcheaologists and forensic anthropologists can reconstruct probable age, sex, and sometimes ancestry. As a result, biological profiles of the skeletal remains can be constructed to further understand the life of the individual and their response to natural and cultural change. Skeletal remains can be aged according to their skeleton size and teeth and sexed based on the pelvis and the skull. But at what cost?

The aging and sexing of a skeleton is crucial evidence in determining how that individual may have lived. Both features are present in Snow’s protocol for proper identification. When determining age, the skeleton is crucial due to the fact that it grows rapidly during childhood. For this reason, assessing the age of a subadult (younger than 18 years) is easier and often more precise than aging an adult skeleton. In addition, teeth are a key factor in determining between children and adults. However, after the child has reached 12 years of age, aging by teeth becomes difficult due to the fact that at this point most adult teeth have erupted. In regards to sexing skeletons, the pelvis is the best indicator. Due to selective pressures for childbirth, human females have pelves that provide a relatively large birth canal. Skeletal remains can also be sexed with the idea that humans are slightly sexually dimorphic…whereas in most cases men will be larger than women. Male skulls are more robust on average and have a larger browridge. So why might all this information be useful and relevant to modern day people and cultures? Bill Maples case of the Romanovs used the preceding information, among other information, to successfully identify nine individuals thought to be the remains of the Romanovs.

From a bog on the outskirts of Ekateringburg, nine almost complete skeletons were found in a shallow grave. Assemblages to these skeletons included fourteen bullets, bits of rope, and a shattered jar. Bill Maples was able to identify the age and sex of these individuals and identify five of them as male and four of them as female. Additional information included that all of the females had dental work while most of the males had few teeth at all. There is a skeleton to fit everyone in the Romanov family that was reported as missing with exceptions of Tsarevich Alexei and his daughter, Anastasia. If discovering bodies that have been missing in history is not as exciting if not more exciting than aliens on our planet, I’m not sure what is. Archaeology can be captivating if given the attention and everything doesn’t and shouldn’t be about pseudoarchaeology. 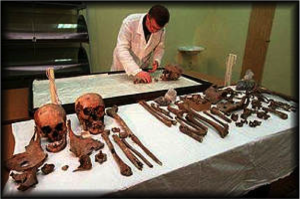 The previously mentioned “cost’ of bioarchaeology includes that it is often criticized for having little to no concern for culture or history. Large-scale skeletal collections have been amassed from the remains of Native Americans with no permission granted from surviving family for study and display. Federal laws such as NAGPRA (Native American Graves Protection and Repatriation Act) have allowed Native Americans to regain control over the skeletal remains of their ancestors and associated artifacts in order to reassert their cultural identities. The attempt of NAGPRA to balance science and respect for the past is a nearly impossible task. The results are a never-ending cycle between trying to respect past cultures while also trying to better understand them. In a world full of questions, its becoming harder and harder to find the answers.

Slater, W. (2007). The many deaths of Tsar Nicholas II: Relics, remains and the Romanovs. London: Routledge.