Different civilizations place higher value on various materials and therefore we cannot make assumptions about past cultures based on today’s value system.  While some civilizations from the past deem precious metals like gold, silver, and copper to be objects of higher worth, others find value in a different variety of items.  Archaeologists have determined for example that the Aztecs held feathers as one of nature’s most valuable gifts, as birds appeared to be very important in their culture.  The Aztecs would use brightly colored feathers in headdresses worn by their leaders, including the great Aztec emperor Moctezuma.  Great time and care went into the making of any object involving feathers, as feather-workers spent weeks creating intricate designs to be used in battle shields and adornments, important buildings, cloaks and costumes of the nobles, and religious ceremonies. 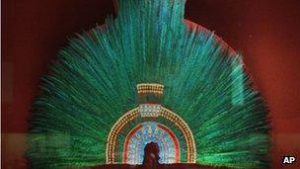 The great feathered headdress, supposedly worn by the Aztec emperor Moctezuma himself.  This headdress was believed to be given to Hernan Cortez by the emperor, which is how it presumably ended up in Europe.

The importance of feathers appears to stem from the many references of birds in Aztec culture.  One of the first references to birds in Aztec culture is in the story of how the Aztecs choose the area in which they would build the capital to their future empire.  Legend states that the grand Aztec capital Tenochtitlan was chosen because the first Aztecs wandered and searched for a long time till they witnessed a bird perched on a cactus eating a snake, which is now pictured on the current day Mexican Flag.  The bird in this story is seen in a position of power, as it sits on top of the cactus, peering over the land.  There are also many references to feathers and birds in the Aztec religion.  The Aztecs held many rituals involving human sacrifices to the gods, but birds were also sacrificed during high religious ceremonies.  One of the most important gods in Aztec culture is named Huitzilopochtli, which translates to “Hummingbird of the Left.”  Huitzilopochtli was the god of the sun and of war and the Aztecs believed that warriors who lost their lives in battle would return as hummingbirds, which are characterized by their vibrant feathers. 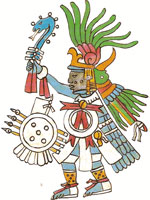 The Aztec god Huitzilopochtli, generally pictured in artwork bearing the bright colors of the hummingbird and holding his serpent-like weapon.

Quetzalcoatl was one of the other most important gods in the Aztec religion and his name translates to “plumed” or “feathered serpent.” Quetzalcoatl was one of the Aztecs gods of creation, as well as the god of learning and wind.  Many of the important Aztec gods are associated with birds or feathers, leading us to believe that this is one of the reasons that the Aztecs held feathers as such valuable materials.  Only through the analysis of Aztec culture, especially their religion, can we attempt to see the true reason that the Aztecs valued bright feathers and understand that value of a material differs from culture to culture, but that does not make any specific culture more or less advanced because of what they value.

Aztec Religious Ceremonies and Rituals. (2017, May 11). Retrieved September 19, 2017, from http://www.historyonthenet.com/aztec-religious-ceremonies-and-rituals/

Brittenham, C. (n.d.). Did the Maya and Aztecs take feathers for headdresses from birds other than quetzals? Retrieved September 19, 2017, from http://www.mexicolore.co.uk/aztecs/home/did-the-maya-and-aztecs-take-feathers-for-headdresses-from-birds-other-than-quetzals-1

[Huitzilopochtli represented in the Borbonic Codex. He is carrying a snake like weapon called a Xiuhcoatl and a shield. On his head is a headdress imitating the head of a hummingbird]. (n.d.). Retrieved September 19, 2017, from http://www.mexicolore.co.uk/aztecs/gods/god-of-the-month-huitzilopochtli