The archaeologists who dug up the Atari game in the trash dump in New Mexico validated the theory of Punk Archaeologists is an established mode of thought. Filmmakers were also part of the crew of archeologists. Their initial response was motivated by interest in archaeology science and video game history. These punk archaeologists reversed the value of a culture that valued the past and things that are old and unique for searching for games that were not rare, but ordinary. The most interesting thing about this was that the scientists dug up the old Atari game, which represented a look at corporate history and the “end-of-lifecycle” for products. Thus their work helped people better understand Atari’s corporate decision making and how they tried to advertise the game. This dig answered the question where old, returned or overproduced products went to die out. Did they just vanish? Punk Archaeology showed where these old products went. Thirty years later, these old video games became material record of the past. The most favored game was E.T. The Extra -Terrestrial, and E.T. finally came home. The archeologists were part of turning these old games into museum artifacts from target of consumer wishes. The archaeologists also wanted to see the concrete and the line between product and trash as well as the games. Atari had concealed the unsold and/or undesirable games under concrete. 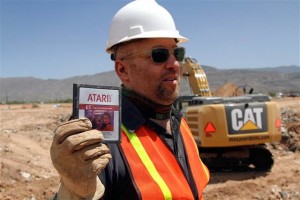 After the media blitz, the archaeologists were overlooked in the papers and the news focused more on the filmmakers who documented it. The filmmakers knew that the excavation gave the archeologists, anthropologists and historians a chance to look into a modern landfill while digging up the recent past, while people responded to this modern find. Even though some believe they were overlooked, I believe this excavation showed that Punk Archaeology did succeed in challenging established modes of thought to help people better understand our culture.

Up close photo of game cover