Some questions for investigations here, presented in the form of a rant. As part of my research in musical urbanism, I consume a fair amount of music coverage in print and online. Jesus Christ, all I seem to find these days is “writing” about generic touring festivals headlined by Coldplay/Metallica/Fiona Apple/Beach House/you name it. News about new music festivals. News about cancelled music festivals. News about how the concert industry, which has put so much of its eggs in the festival basket, now outpaces the recording industry. And the evergreen question, what’s the line-up for Coachella 2013? 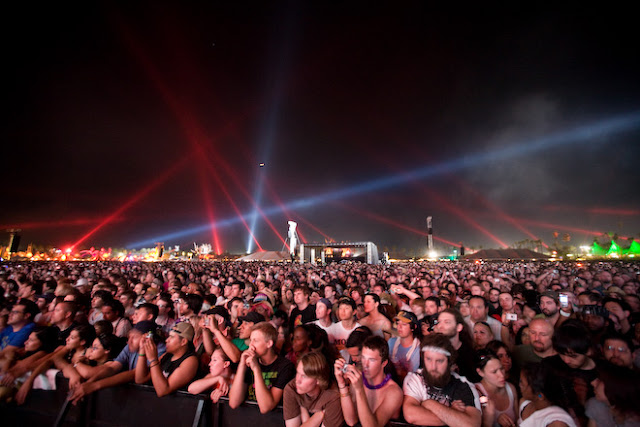 Look, I fully support the right of youth to indulge in the mass communion of bad sightlines, expensive food, sunburns and portapotty stench for the romantic pursuit of sex, drugs and [insert any pop genre here]. I’ve indulged in that myself.  Coachella, Glastonbury, Sasquatch, Werchter et al—by all means, let them be the gateway drug to a rich life as a music listener. But it’s interesting and, frankly, discouraging that the generic, touring festival seems to be the end game for live music these days, with generally no thought being put to how live music might be presented more imaginatively and meaningfully for listeners and musicians alike. And, conversely, little attention is given to those more imaginative and meaningful festivals.

Place is an especially important concern here. While geography is what ostensibly differentiates one Live Nation mega-event from the next, inside the venues the performers, the lineups, the layout, the vendors etc. are generally undistinguishable and internchangeable across the events. They’re carefully themed spaces that are paradoxically placeless, at least beyond the conceits of the event. The rise of generic touring festivals don’t yet make me worry for the fate of cities, urban economies, or local music scenes. But I sometimes wonder if the dull ubiquity of big-money touring festivals makes younger audiences eager for the theming of their everday spaces: the commodification of colleges and universities, the insularity of the hipster neighborhood, and so on.It’s understandable why ‘independent’ music, which at one pre-ironic point in cultural history was opposed to such commodification, increasingly hitches its wagon to corporate music festivals today. Although touring the music-festival circuit can be a draining, exhausting slog, the promotional opportunity can’t be beat, at least when these events are all any music publication or blog wants to write about. I suspect it also helps that “indie rock” is now mainly the purview of 20- and 30-somethings without dependents to tend to.This is something that the EDM industry has especially figured out. The facts that this music thrives in nightclubs and other smaller venues, and that rock music has long dominated the festival circuit, make me think there’s nothing intrinsically “rave” to the big-field setting for EDM festivals today. EDM has more likely thrived because the barriers to entry for performers are low. Bringing along a laptop or (for the old-school purist) a crate of records is all it takes for most DJs to hit the stage—no long load-ins or soundchecks necessary. Perhaps this infrastructural advantage is the real basis for the recurring rockist insult that “no talent is required to play electronic dance music.”At least those are my hypotheses. Here are a few more.

1. The context for this state of affairs isn’t live music itself. Obviously, this is what happens after the recording industry loses its profit model. Live music is what David Harvey would call a spatial fix—a secondary circuit of accumulation that capital taps into when profits in the primary industrial circuit dry up. We’re simply seeing the next iteration out from the recording industry’s abandonment of artist development and its short-sighted embrace of the quick-profit singles market.

The above means let’s not celebrate the initiative and entrepreneurialism of the “concert industry” just yet, since the high rate of event cancellations suggests they’re still largely throwing business models against the wall to see what sticks. An important question for further investigation is, Just how distinct in name/experience/profile are the players and financial backers in the “concert industry” from the rest of the “music industry”?

2. If we might expect the bovine migration of the corporate sector to the music-festival sector, I’m more disheartened by the failure of imagination on the part of the music media to write about anything else. Their rote, uncritical coverage isn’t limited to summertime, when festivals generally overshadow the release of noteworthy albums and (another dismaying phenomenon) the TV season for Idol, The Voice, etc. How many freakin’ tweets have I read about Coachella: the bands, the fashions, the line-up for next year, the threat of its cancellation, yada yada yada? And South By Southwest… thank god for the SXSW tweet-blocker. I think at least three factors could be culprits:

a) the collapse of the publishing industry, which has shrunk staff, dried up money for original reporting (i.e., news that isn’t “researched” via Twitter or a YouTube livestream), and made it hard for remaining music/arts & culture reporters—particularly at weekly alternative newspapers, still the source for the best local music coverage—to keep their ears to the local ground and make a living;

b) the tail-wags-dog rationale of bigger publications covering “what younger readers want.” So Spin Magazine calls its July/August edition the “Outside Issue,” etc. Implicitly, this further yields the album market to older/occasional listeners who (it will be assumed) want “the next Adele.”

c) the convergence of culture reporting and business reporting that has been encouraged by the dominance of Richard Florida’s creative-city paradigm. While the shrewd promoters will spin a line about how their event borrows from the SXSW model, city papers can now rationalize their arts coverage as a means to a more ‘legitimate’ end.

3. What’s perhaps most surprising is the absence of traditional urban business community involvement in the music-festival sector. Why is this? The rare “post-rave growth coalition” notwithstanding, I suspect the players in most urban growth machines rarely overlap with the world of festival promoting. This may be because many of these events are held in big, exurban fields, which suggests that large-scale property owners will be the main node of connection. But so far I don’t see much active participation (as opposed to passive profit-making) in festivals that happen in city environments either, short of a few notable exceptions—Austin, Berlin, etc.Traditionally, being an urban booster on the chamber of commerce has been the antithesis of hip. Historically, this has been the basis for criticism of its philistine Babbitry. In these ironic, hipster-saturated times, it’s a rare source of integrity for the urban business community. I happened upon a rare music event organized by a urban business improvement district recently: the Downtown Albany Blues Music Competition. Evidently the Chamber of Commerce even got to select the line-up of performing. How “hip” is that?