When Europeans arrived in the early 1500s, the Aztecs had one of the largest empires at the time with a population over 200,000. With a massive size and impressive organization and cleanliness, the Aztec empire could be considered one of the more sustainable empires in history. The Aztecs maintained systems of organization of resources that would be admired in today’s society.

The foundation of their sustainability comes down to their use of small, artificial islands that they built to accommodate the growing population, known as chinampas. The Aztec chinampas covered over 12 square kilometers and were highly productive due to the high amount of water and sunlight in the area. The productivity was further increased by the recycling of nutrients. The Aztecs had a method for disposing organic wastes that would fertilize the crops. Human excrement was used often and highly valued in the Aztec society. Urine was usually stored and sold. Reusing excrement prevented it from being released into the environment, preventing the pollution of the lakes surrounding the chinampas. 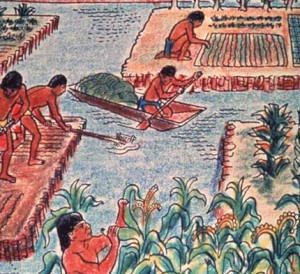 Littering and dumping waste was highly frowned upon in Aztec society. Wastefulness was not tolerated at all and in some cases individuals would be sentenced to death for being wasteful. They even had a system for recovering recyclable waste. They also maximized recycling by burning certain materials and then disposing the remainder in chinampas, which helped fertilize the soil.

The Aztec empire had managed to create and maintain, what we would consider today a sustainable materials management system, which is considered the most ideal method for managing waste, conserving resources and protecting the environment.

Although they had an ideal system of sustainability, the empire did not survive the militant conquest of the Spaniards. After conquering the Aztecs, the Spaniards dismantled the waste management system, drained all of the lakes, and built Mexico City over the land. 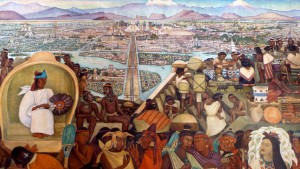 Overview of the grid-like layout of the chinampas

This begs the question, how long would the Aztecs have survived had they survived the Spanish conquest? With their constant reuse and recycling of organic materials, they minimized their impact on the environment. Because their waste was also considered resources, they showed no signs of exhausting these resources, which is a major issue in the topic in sustainability of today’s society.

With sustainability being a prominent issue today, applying some of the theories and viewpoints that the Aztec empire used as far as waste, adaptability, and resources could help reduce the massive effect that modern society has on the environment.

How did the Aztecs get their food? Sustainable farming in Aztec times

What Killed The Aztecs? A Researcher Probes Role of 16th Century Megadrought