The General Biology of the Black Capped Chickadee- Poecile atricapillus

Introduction to the Black-capped Chickadee:

This image is a range map of the Black-capped Chickadee (Year round) Retrieved from: http://bna.birds.cornell.edu/bna/species/039/articles/distribution

The Black-capped Chickadee is a common and well studied songbird found in much of Canada and the Northern United Sates.  This species is non-migratory and individuals tend not to travel very far from their home turf after their initial dispersal as young birds. Individuals can usually be seen hopping from tree to tree, and their flight is characterized by rapid wing beats. They are also able to walk along branches upside-down, but this behavior is rare. Additionally, Black-capped Chickadees are known for their fantastic spatial memories which enable them to store food in their environment. Regarding appearance, Black-capped Chickadees can be distinguished by their black cap and throat. They have white cheeks, a black bill, a white underbelly, and a long tail. The wings of adult black-capped chickadees tend to range from 12.3 to 14.6 cm. The bill for males tend to range between 8.0 to 9.5 cm, for females 9.0-9.5. Tails for males tend to be 58 to 63 cm and for females, 60.5 to 66.5 cm.

The chickadees tend to live in thick vegetation which protects them from the cold environments they live in. To cope with the harsh nights of winter, Black-capped Chickadees will regulate their body temperature such that they enter a state of controlled hypothermia upon nightfall. This allows the Chickadees to save energy during a time when the conservation and efficient use of energy is imperative to their survival.

Members of this species forage only during daylight hours. Interestingly, they will rarely eat food exactly where they find it. Instead, they take it to a safe location, the distance to which is determined by the size of the food in question. In the spring, Black-capped Chickadees are known to forage for a variety of insects and spiders, especially caterpillars. In addition, they will eat a variety of berries and are known to eat the eggs of other bird species. Although their diet is not entirely animal based, during the breeding season a huge portion of a Chickadee’s energy intake is in the form of other animals. The micro habitats in which Chickadees will forage during the breeding season are mainly on and in the branches/bark of trees. During this time, they will rarely forage on the ground. In the winter, the Chickadee’s diet shifts to half plant based and half animal. During this time, the micro-habitat in which Black-capped Chickadees forage is the same but slightly limited due to the loss of foliage.

Birds of the same flock tend to roost in close proximity to each other. In addition, Black-capped chickadees are known to gather in flocks with other species and sometimes even lead those flocks in movement. In the non-breeding season, encounters can happen within or between different flocks; however, actual fighting is rare and is usually kept to chasing and fleeing. This species uses visual displays to express satisfaction and aggression.

The greatest predators for adult Black-capped Chickadees are birds—notably hawks, owls, and shrikes. On the other hand, the predators of newborn black-capped chickadees are mammals and birds. Some bird predators will attack eggs or newly hatched chickadees in order to compete for nest cavities. When a predator does attack, the chickadee will send out a high pitched shrill call, which causes nearby chickadees to freeze before mobilizing. When a predator attacks, a black-capped chickadee may perform a distraction display, where they spread their wings, raising and lowering them. The high, shrill call, initiates mobbing behavior and mobbing calls in all of the black-capped chickadees in the surrounding area, where the birds will then band together and harass the identified predator or threat. The mobbing calls will communicate information about the predator and determine the intensity of the mobbing response. 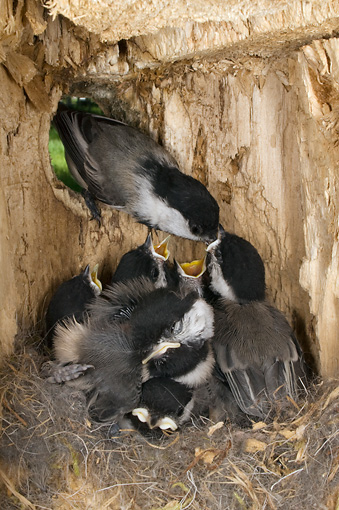 Mating usually takes place in the fall but may occur in the spring and winter if there are mortality risks in the population. Black-capped Chickadees pair based on rank, where the high-ranking males mate with high-ranking females. Relationships are monogamous in most cases. They build their nests one to two weeks before they lay eggs.

Males and females excavate nesting cavities in trees. However, the nest itself is made by the female. Nests are usually not reused. The eggs are incubated by the female, while the male brings the female food. When the hatchlings finally emerge from their eggs, the parents don’t assist at all.