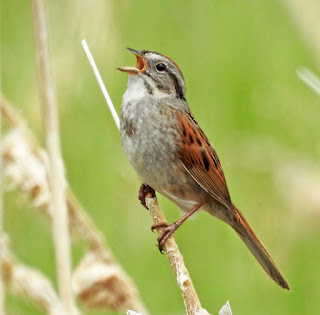 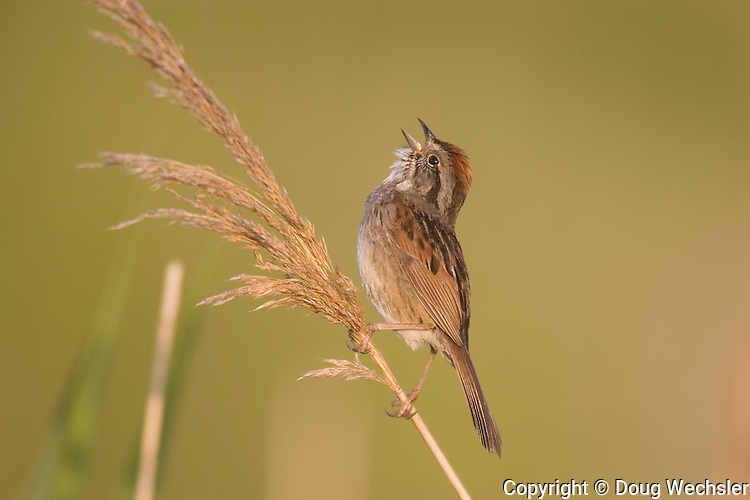 Swamp sparrows (Melospiza georgiana) have different variations of vocalizations, with both songs and calls. The males produce a primary song and a flight song, whereas the females produce a nest departure call. Both sexes have a universal and basic call that has a sharp and excited sound that they use for many different functions, as well.

The male’s primary or “weet” song basically consists of pure-tone trills that are produced rapidly in bouts of two to three trills. The primary song is used by males for territorial purposes and to be recognized by potential female mates, showing that the use of this specific song is highly motivated by a reproductive drive. They are known to react more aggressively and defensively when played their own song, showing that this song in males is important for territorial defense (Mowbray, 1997).

The male flight song is not often heard and is sung most frequently when the males are establishing their territories in the spring. It is thought to be composed of completely different notes than the primary trill song and sounds complicated and irregular. When the primary song follows the flight song, then the primary song will be significantly shorter in length (Mowbray, 1997).

The nest departure call is produced when the female is leaving her nest. Some characteristics of this call include broadband notes, short notes with an obvious end and beginning, and repetition. This could be for the purpose of having a simple and effective way of getting her message out, repeated frequently to ensure she is heard. Often, the female’s call will end with a “chip” and the rhythm of these calls can be syncopated (Mowbray, 1997).

There are three different dialects that vary depending on geographic location, and reflect different orders and types of the notes within a syllable, but still produce the same type of general trill sound (Mowbray, 1998). As seen in the spectrograms below, the basic structure of each of the syllables in the different populations is similar, but the differences lie in the frequency and arrangement of the notes in each syllable. Since swamp sparrows reside across a large portion of the U.S and Canada, and also learn their songs, the songs tend to vary across different geographical locations. This is because when learning a song, birds over great distances might learn the song slightly differently, and because they are separated from the other populations, the song may continue to change slightly and other birds in the area will learn this song. Figure 1 below shows swamp sparrow songs from three different populations. They are all different but have very similar syllables and trills. Swamp sparrows are communicative, so it is in their best interest to share songs with those around them. In a study published by Don Kroodsma in 2017, it was found that birds that are living in the same area tend to know the same songs. This is seen in Figure 2 below, where two different birds know the same two songs. 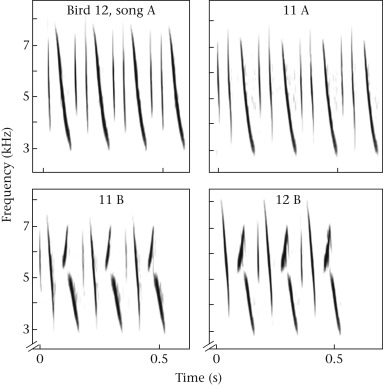 The development of the swamp sparrow song consists of four major divisions: subsong, sub plastic song, plastic song, and crystallized song. Subsong is equivalent to the babbling stage in humans, where the bird makes incoherent notes and sounds. The sub-plastic song is where the beginnings of a note sequence or notes in the song can be heard, and the plastic song is when it is sounding similar to the song. The crystallized song is the fully developed, final version of the bird’s song. In an experiment done by Marler and Peters (1982), male swamp sparrows were hand-reared in a laboratory and were played recordings of bird song. 8 months later, they were found to have about 2.2 songs per bird, and adding more song material as they grew until there was a 4-5 times excess of song material. However, in crystallization, the birds seemed to have lost all the excess material. This implies the birds have selective attrition; they learn many songs at first but only choose to remember what will be most useful to them as an adult. They also tend to improvise their own vocalizations when learning, but choose not to remember them in crystallization because they are not as useful when communicating. (Marler and Peters, 1982)

Further research has been done with swamp sparrows to test how they respond to vocal deviation. Ornithologists have been delving into the question of whether both trill rate and bandwidth affect how males react to different types of songs. In one case, they conducted a playback experiment in which the results showed that males were more aggressive towards songs that were higher and faster rather than slower and lower, and they did this regardless of the specific vocal deviation (Phillips et. al, 2017).

Not a lot is known about some of the swamp sparrow mating behaviors, so it would be useful to conduct experiments in the future to learn more about this crucial aspect of their behavior. A manipulative study done on Lincoln’s sparrows showed that females “change the strength of their song preferences” depending on whether they consider the song environment in which they have been exposed to as attractive or not (Sockman and Lyons, 2017). The findings in this study suggested that these behavioral changes were a result of a neural mechanism that is active in sexual signaling. An experiment like this could be conducted on swamp sparrows in the future to see if the attractiveness of their song environment (sexual signaling) plays a role in their mate selection.