The Barred Owl (species name Strix Varia) also goes by the names Hoot Owl, Eight Hooter, Rain Owl, Wood Owl, and Striped Owl. They are often mistaken for Spotted Owls, which are visually quite similar. This mixing up of the two species is not limited to amateur birders; hybridization is occurring between the species as the Barred Owl moves into Conifer forests that were once occupied solely by Spotted Owls.

Barred Owls are overall mottled brown and white, with their undersides being mostly white with vertical brown bars. The upper breast has horizontal brown bars.  Unlike many other species of owls, that do not have ear tufts on their round heads. A fairly large bird, Barred Owls have a wingspan of 96cm to 125cm and may weight 500 to 1050 grams with the females typically about 1/3 larger than the males.  The eyes are large and dark with a face that is a relatively light pale brown color. The beak and feet are yellow with dark black talons.

Habitat of the Barred Owl

If you are looking for a Barred Owl, you will do well to search high in the trees of an old growth forest. They prefer large deciduous, evergreen, and sometimes coniferous trees for nesting and roosting. Their taste for fish means that they often live near streams or swamps. They have also been found in the suburbs, Vassar Farm, and Hyde Park.  Luckily for you, they don’t migrate, so you will find them in the same general areas year round. Barred Owl peeking between the trees at Vassar Farm

They are nocturnal, and so they will usually be hiding in dense foliage when the sun is out. At night, or when it is rather cloudy, they will be active, hunting voles, mice, squirrels and many other small mammals. These ground foragers will also eat amphibians, reptiles, smaller birds, and invertebrates, such as worms. They will wait atop a perch until prey is spotted before swooping down to grab and eat the creature in the same place it was captured. If the prey is rather large, the Barred Owl will carry it back up to a roosting branch and eat up where it is safe. Occasionally they will wade in water to catch fish or frogs, but you’re much more likely to find them in branches up above the water. Don’t count on hearing them when they do decide to strike; they are nearly silent flyers thanks to specially designed feathers. 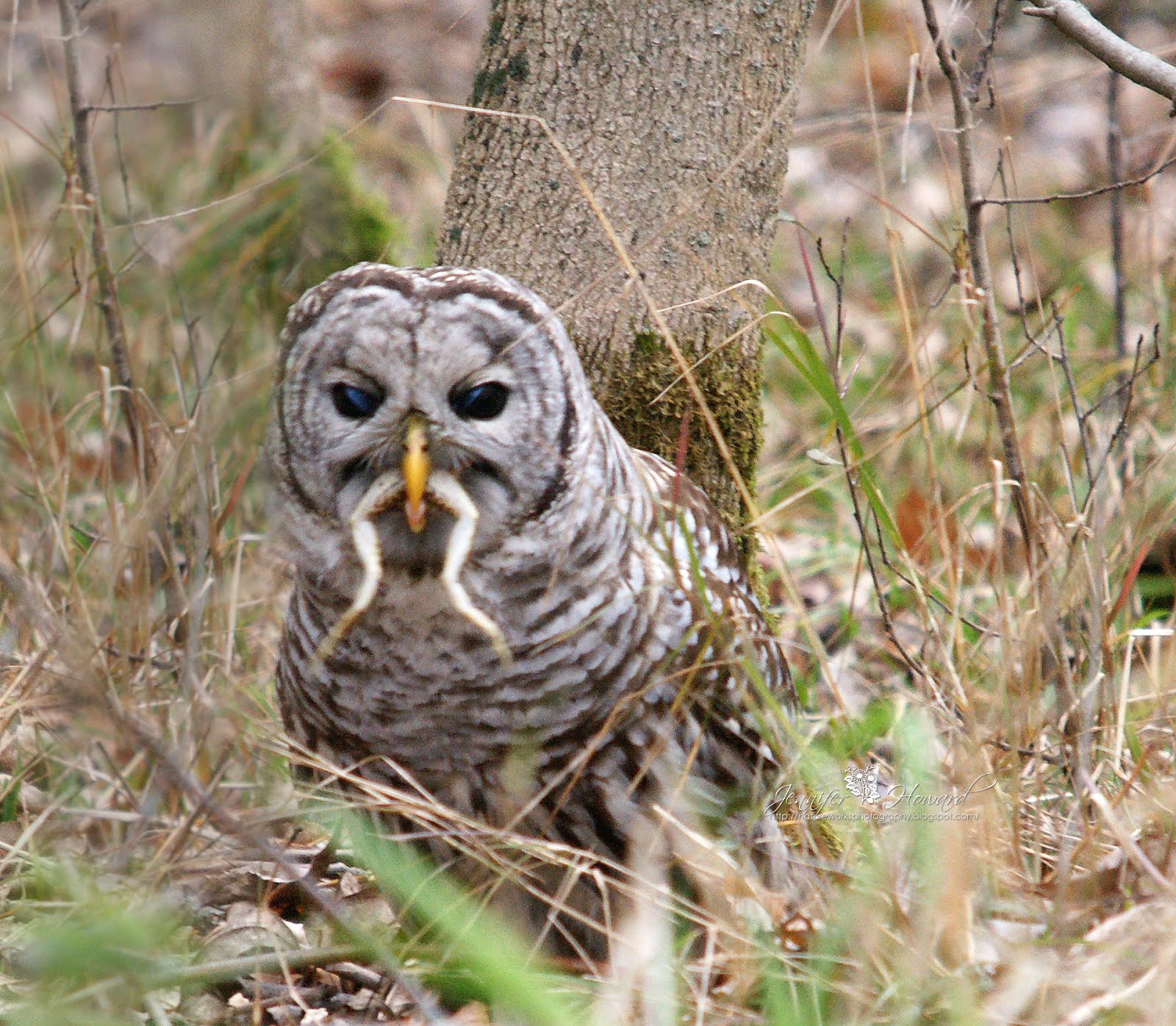 Barred Owl munching on a frog

Most of the year, Barred Owls are very solitary and will defend their territories fiercely. As breeding season approaches in late winter, however, they will begin searching for their mate. There is evidence to suggest that Barred Owls return to the same mate every year, but that doesn’t mean the courtship displays stop after the first year a pair couples up. Females will perform a caterwauling solicitation call and males will call back with their own hooting response. After this, a male may dance for the female by nodding, bowing, spreading the wings, and slowly slipping along a branch. These call and response displays will occur up until March, when breeding begins. Breeding season spans from March until August.

A pair of Barred Owls roosting

The nests will be prepared high up, 20 to 40ft, in dead tree cavities, but Barred Owls aren’t picky; they will often take abandoned bird and squirrel nests, augmenting them with a bit of lichen, sprigs, or feathers. They may have 1 to 5 eggs that incubate for about 1 month. It is suspected the the females tend to be larger than the males so that they have enough internal resources to incubate for this lengthy period of time. She is reliant on the male to bring her food when nesting, but the female’s extra energy deposits are certainly useful when he comes up short. 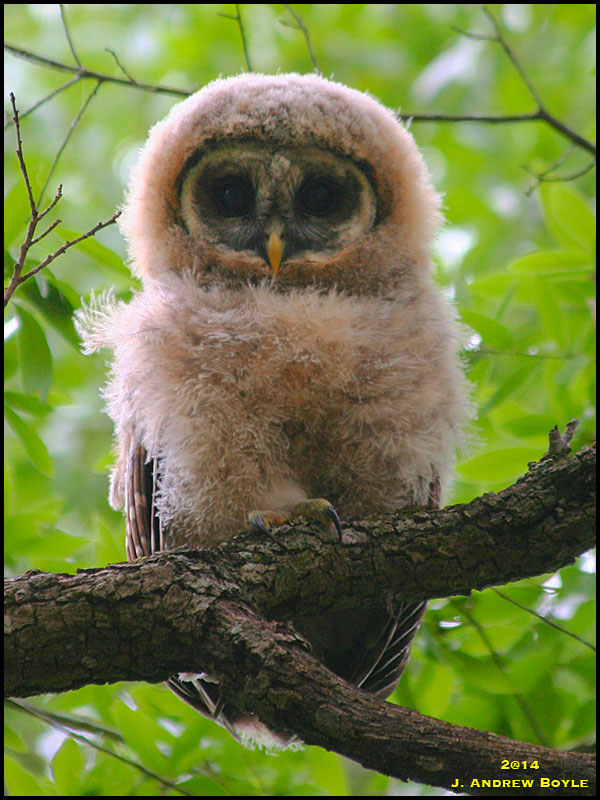 Barred Owl chick with all its down feathers

Those 1 to 5 eggs are typically the only brood the pair will have for the season, but if the eggs are not successful, they will take advantage of the long breeding season and have some more. Once hatched, the male will help bring food to the female that she can tear up and feed the chicks. After 4 weeks, the hatched offspring will crawl out of the nest and roost in nearby branches, where the parents continue to watch out for them for 4 months or more, a very long period of time compared to most owls. Overall, Barred Owls are fascinating creatures that are a joy to observe.

A Barred Owl spotted on the Vassar Farm

One Response to Biology of the Barred Owl – Strix Varia