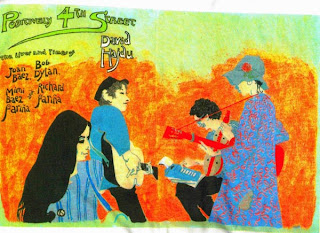 The role of folk music in America’s postwar cultural and social history doesn’t lack for testimonies. Being the privileged soundtrack to the middle-class generation born during or just after the war, the story of how this music ‘changed the world’ won’t go unrecorded thanks to Baby Boomers’ economic and political hegemony. And yet the peculiar registers of this moment are often glossed over by the folk sounds of pop music today: indie-rock eccentricity (think Fleet Foxes and Joanna Newsom), Laurel Canyon solipsism, the genteelity of Nashville’s alternative scene (think the Civil Wars), and an ever-growing genre of Bob Dylan hagiography. Surprisingly little is remembered of folk’s coming-of-age in the late 1950s except for that most hackneyed of college-town clichés, the coffeehouse.

An exceptionally entertaining book that restores the place, time and culture of this period in folk music is David Hadju’s Positively 4th Street: The Lives and Times of Joan Baez, Bob Dylan, Mimi Baez Fariña and Richard Fariña. Not the usual narrative about a generation finding its voice, the book focuses on the mutual inspirations, comraderies and rivalries that Dylan and Baez drew from Joan’s teenage sister Mimi and her husband, Richard. (His story is especially forgotten and thus particularly edifying; Richard died at the age of 28 in 1966, on the day of his sole book’s release and Mimi’s 21st birthday.) 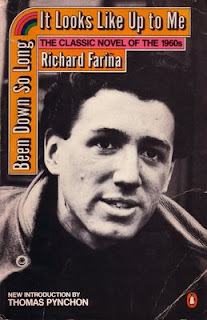 Hadju also rectifies the historical record in two important ways. First, in his commercial success Dylan followed Joan Baez, who was the first young iconic figure to emerge from the folk scene in the late 1950s; Joan trumpeted Dylan’s significance when he was still fairly obscure, and their duets were a regular feature of her concerts prior to his 1962 debut album.

Joan is representative of the “new wave” among the younger folk-singers, who are disenchanted by the commercial, over-arranged-and-orchestrated trends in folk music performance, where the individuality of the singer is sacrificed to the arranger’s conception, and where “sound” rather than meaning predominates. On the other hand, she does not follow those singers who painstakingly imitate the rich ethnic heritage, often thereby submerging their own presonalities and more often draining the tradition of its essentially dynamic, creative qualities (from Maynard Solomon liner notes to Joan Baez’s 1960 self-titled debut LP).

Second, putting Baez first means shifting the setting to a place whose importance in American folk music I never really appreciated: Cambridge, Massachusetts. Hadju’s discussion of the Cambridge scene is brief and limited to 1958-60, from when she enrolled at Boston University for one semester Baez until she recorded her debut album in New York.

In the bohemian pockets of most major cities and college towns around the country in the 1950s, coffeehouses modeled upon European cafés emerged with foreign-film festivals and bookstores that sold imports of Henry Miller novels as outpots of intellectual and sensual dissent: the Blind Lemon in Berkeley, the House of Seven Sorrows in Dallas, the Green Spider in Denver, the Gas House in Los Angeles, the Laughing Buddha in St. Louis, the Drinking Gourd in San Francisco. “You could walk from New York to California by just stepping from one coffeehouse to another without touching ground,” Oscar Brand joked. Their allure was conspicuously counter-American at a high point in the United States’ world prominence—espresso and existential doubt, no cocktails, no glitz, an appealing combination to postwar college students seeking their own generational identity. The original sound of the milieu was jazz, a music recently abandoned by the mainstream American public. As folk surfaced, it spread into the coffeehouses; earthy, unpackaged, economical, and cool, it fit naturally with the Middle Eastern sweets and the cigarettes. In Cambridge, the center of artistic radicalism around Boston since James Russell Lowell wrote The Biglow Papers in the 1840s, the first European-style coffeehouse opened in 1955; run single-handedly by its owner Tulla Cook, the Coffee Grinder was a dim, unadorned place, no larger than a living room, on Mt. Auburn Street, a block from Harvard Square. There were no performers, just Tulla’s AM radio. At the coffeehouses that opened after it—the Cafe Yana, the Salamander, the Golden Vanity, the Unicorn, and Club 47—music soon predominated. “One night I walked past the Cafe Yana and heard this jazz coming out and went inside—the room was full of conga drums,” recalled guitarist Peter Rowan, who grew up in rural Massachusetts and visited Cambridge as a teenager. “Harvard Square was about jazz music. It was mostly college people, and they were talking about William Burroughs and Allen Ginsberg, or trying to. It was turtlenecks and skinny girls. It was very Beat Generation. The next week I walked past and looked in the window, and some girl was playing the guitar, and there were fifty guys in tweed jackets smoking pipes sitting on the floor, and I said, ‘Well, this is different.’” If the young scholars of Harvard Square were seeking something anti-intellectual as a respite from or a challenge to academic authority, they could no longer presume to find it in jazz, which had grown in esteem to be regarded as highly advanced, serious music. In folk, however, Cambridge intellectuals could find all the anti-intellectualism they wanted (Hajdu, pp. 15-6).

JOAN BAEZ: Club 47 was a jazz club, but folk music was becoming the new thing. The first time I sang there [in 1959] I was in absolute panic; there was practically nobody there. But then the next week it was half-full and after that there were lines and lines of people. I was a big smash hit and I was getting $10 a night. By the time I let (the next year) I was getting $25. Big bucks for me (liner notes to Joan Baez’s Rare, Live & Classic[1993]).

Whatever the degree to which Joan drew from the work of Debbie Green, Richard Zaffron, or anyone else in the Cambridge folk scene during her apprenticeship, her voice was her own—a ringing, mezzo soprano with an unusually forceful vibrato that Joan had trained herself to produce, in order to sound older. She was gifted with exceptional intonation, especially by the forgiving standards of vernacular music. Striking and clear yet tightly wrought, self-consciously projected, Joan’s singing demanded attention without apology for its determination to get it. the forces at odds—natural ability and sheer will, nerve and insecurity—helped make her singing enigmatically compelling. There was also a detachment in her approach, an isolation from the emotionality of her material, that worked in congress with her taut stage manner to give Joan an air of regality or ethereality. In folk circles, where audiences had come to expect down-home characters groaning in and out of tune, Joan Baez seemed like the spirit of a child-queen, floating in off the moors (Hajdu, pg. 19).

As Joan advanced through the ranks of the coffeehouses, from Cafe Yana to Club 47, she refined a public image exquisitely in sync with the emerging campus folk audience in the late 1950s. “Joan Baez was more mysterious than anybody around—she really had that East Coast, dark, bohemian type of thing—and the beginning of the West Coast, sixties earth-mother thing,” said Paul Arnoldi, the singer and guitarist. She had what seemed like an incredible authenticity, partly because she was vaguely ethnic,” said Joyce Kalina Chopra, who, with her friend Paula Kelley, founded Club 47. Because the Baezes were so thoroughly assimilated, however, Joan merely suggested the idea of being Mexican through hints in her appearance and her surname; this, of course, made her the ideal kind of Latino fr white audiences: a wholly familiar, non-threatening abstraction. “And she never smiled once,” said Chopra. “She was very serious, which was all part of the folk scene—very grave. And she was singing these songs most of us had never heard before. So when she sang about lost love, and sang all these English ballads [from Boston folklorist Francis J. Child’s 5-volume book series, The English and Scottish Popular Ballads], it somehow seemed important. So that for young people at the time, who were searching for things to be serious about—that was very powerful” (pg. 21).

These riffs contrasting folk’s “anti-intellectualism” and “seriousness” to the business of the education and socialization students would receive at Harvard are jarring, I admit. They evoke the Cold War America that C. Wright Mills criticized: a culture of “crackpot realism” (in The Power Elite, 1957) whereby “[l]eisure time thus comes to mean an unserious freedom from the authoritarian seriousness of the job” (in White Collar, 1951). As well, they’re far cries from the custodially-caretaken playgrounds that characterize many exclusive private colleges today, as depicted most recently in the 2010 film The Social Network. 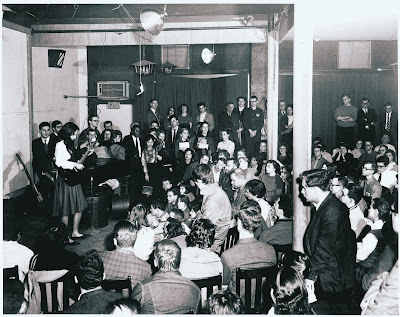 Joan settled in as a weekly regular at Club 47, a sizable storefront on Mt. Auburn Street, a block east of Harvard Square, that had previously been Fournier’s used-furniture shop. To darken the mood of the place, which had large commercial windows on two sides, its young proprietors hung long brown curtains and painted the walls glossy black. A photograph of the room taken in the spring of 1959 shows Joan standing along the rear wall, singing with her head bowed; more than a hundred young people sit listening, their eyes heavy, faces drawn. “Joan was a sensation,” said Joyce Kalina Chopra. With no promotion beyond mimeographed flyers and little press coverage except items in a few of the college newspapers, the eighteen-year-old singer found herself performing to progressively larger and more responsive audiences, indicative of the Cambridge folk scene’s growing popularity as well as Joan Baez’s position as its chief beneficiary and stimulus (Hajdu, pg. 22).

The Cambridge folk scene is further mentioned in Joe Boyd’s 2006 memoir, White Bicycles: Making Music in the 1960s, which emphasizes the cohort a couple years behind Baez (particularly Geoff and Maria Muldaur) but overlaps in a couple of areas (people like Eric Von Schmidt, the denouement at 1965′s Newport Folk Festival). Here’s a nice online testimonial from 2001, which notes the passing of Mimi Fariña, an event that just escaped mention in Hadju’s Positively 4th Street. And just last week, a new documentary about Club 47 made its premiere in Boston.