Under Franklin D. Roosevelt’s New Deal program resources were given to create jobs preserving the nation’s monuments to protect them for posterity. Thousands of people were called upon to conduct large scale excavations across the lower 48 states. Archaeological projects were first funded through FERA or the Federal Emergency Relief Agency and then the WPA or Works Progress Administration. Archaeological programs worked closely with the Federal Writers Project to create state guides that provided a historical, cultural, and archaeological view of each state, while employing more people and encouraging tourism. 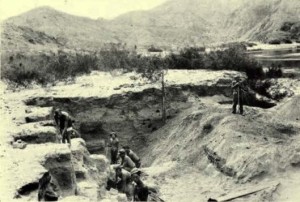 The archeology practiced by these teams was not always the best form but it ultimately resulted in an increased understanding of archaeology in the public sphere and exposed people to the archaeological process. The crews would enter a site and often end up destroying much of the critical context around the finds and removing them from their associated objects. This was partly because modern sampling strategies using parallel and intersecting lines and squares had not yet been developed and also because most of the workers had no professional training in archeological field work or theory. So significant amounts of data have been lost about many of the Native American sites and colonial ruins that were excavated under the New Deal.

The archaeology done under the new deal was a form of Processual Archaeology and part of the period known as the “classificatory historical period”. The goals were to create a chronological narrative of a region as was common in the time. The narrative element also lent itself well to the creation of the State Guides. 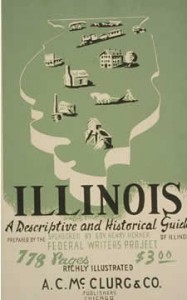 The Cover of the FWP State Guide for Illinois

And through these state guides the history and archaeology of the country was opened up to the rest of the population instead of the elite intellectuals of the country. Among the programs of the New Deal the archaeological projects created more public awareness of the historical context of the United States and brought us more new information. Many other programs like the CCC and WPA just improved on existing things in the United States by restoring buildings, National Park maintenance, and building projects, but archeological programs took the bleakness of the Great Depression and used it to create opportunities for research and collecting knowledge from resources right outside our doors. And even if the processes were not perfect in the grander history of archaeology they widened the foundation of American Archaeology and made room for organizations like the Society of American Archaeology and other groups that serve to protect and preserve America’s archaeological resources.