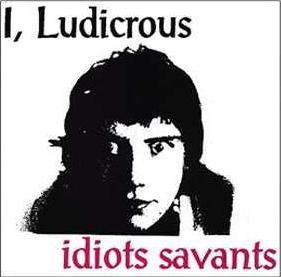 [Very pleased to feature Musical Urbanism’s first guest blogger, Andrew Stevens, a writer and researcher living in London. A Fellow of the Royal Society of Arts, Stevens is a Member of the Regional Studies Association and Urban Economics Association. -LN]

The notion of contested space is nothing new, geopolitically or in place studies, but for two South London bands in the late 80s and early 90s, the form of dispute assumed an entirely personal and visceral level usually reserved for rival sports teams. Admittedly the dispute as shown in the lyrics above for I, Ludicrous’ swipe at peers Carter the Unstoppable Sex Machine, was largely one-sided and possibly unnoticed by the other, but the copious mining of place in the form of South London for both bands’ output of the era is a tempting enough proposition to discuss.
I, Ludicrous, as the Graves-bending name entirely suggests, were always destined to remain a residual throwback to the minor leagues of decades ago indie rock, albeit in a slightly blokey unfashionable way. NME Single of the Week in 1992 (chosen by guest editors New Order) was the career peak, after an earlier brush with the mainstream in the form of support slots for The Fall and Voice of the Beehive. Their six album output, distilled into a handy non-career retrospective 20 Years in Show Business in 2007, is the aural documentary of quotidian stints in long gone North London data retrieval firms (‘When I Worked At Textline’, ‘When The Computer Engineer Comes’), since revisited in their 2010 single, the Harvey Pekar-esque ‘Clerking Till I Die’. Unless Dave Eggers or MGMT name-check them any time soon (cf. June Brides and Dan Treacy), younger generations reared on Fleet Foxes and Bon Iver are not likely to venture into the nicotine-stained back catalogue. If US readers find all of this entirely alien, the sardonic and similarly erratic style and trajectory of the Dead Milkmen are the nearest likely comparator, while the minor league football and middle aged gripes subject matter (often place-based) set to post-punk riffs of Half Man Half Biscuit works best as a similar introduction here in the UK (both having found the time to mock Joy Division’s modern day secular sainthood).
Fans tend to cleave towards two camps: those fond of the considerable presence of hymns to the football terraces of South London among the singles, or as Fall fans’ second favourite band (possibly because of their inability to follow anyone else not connected to Mark E. Smith in some tenuous way). ‘Three Football Grounds’ delivers as an assessment of the comparative offer of Millwall FC in South London to North London’s Fulham FC, helpfully noting that New Cross Gate is the nearest station. ‘C2s in Vans’ (‘C2′ is the UK government statistical definition for ‘skilled working class’, US readers should think Joe the Plumber) considers the preponderance of traffic on Morden High Street and how attractive the vehicles’ inhabitants are to political parties in swing seats, while ‘M25′ considers the folly of post-war transport planning in Outer London. ‘Preposterous Tales’, arguably the band’s best known track, devours the repertoire of a pathological liar pub bore who once “apprehended a mugger outside Brixton tube”.

Two guys with a beat box on Top of the Pops
It happened to them, why didn’t it happen for us? 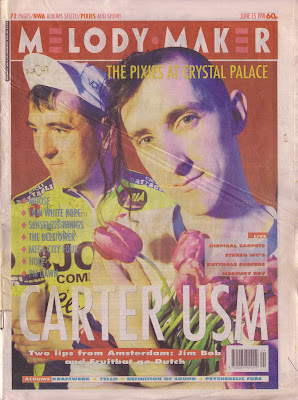 In absolute contrast to I, Ludicrous, Carter The Unstoppable Sex Machine were able to plough a reasonably successful furrow through both sides of 1990 (the ’120 Minutes’ era, perhaps) by churning out spiky riffs over a frenetic drum machine, often sample-laden, with pithy socio-political commentary (or “torturous rhymes” as I, Ludicrous had it) lapped up by a largely male tribal-hormonal crowd of 16-21 olds in the education system. The Carter corollary was perhaps not as plentiful as I, Ludicrous imagined it to be – the fanbase graduated, the record company grew tired of limp product and both musicians seemed destined to play tiny venues (I once saw one of them clambering aboard a bus in Hackney, guitars and amps included) in inauspicious solo careers. A second wind was provided more recently in the form of fairly successful regular reunion gigs (this time with roadies and riders, you have to assume), mostly packed out and, as their second album had it, 30 Something nostalgia freaks in attendance. But to bring it back to place, and contested one at that, the Carter winning formula was rich in evocation of South London districts and liminal zones (albeit sideways mining cultural references) – ‘The Taking of Peckham 123′, ’24 Minutes From Tulse Hill’ and ‘The Only Living Boy in New Cross’. ‘Midnight on the Murder Mile’ a chilling depiction of a mugging in Crystal Palace, while chart breakthrough single ‘Rubbish’ name-checked the altogether unspectacular railway station of Elmers End (possibly of notice to the band as the station serves no community as the contaminated land is uninhabitable). Carter’s crafted claim to South London musical hegemony is well known among anyone familiar with the era (a ‘goes without saying’ argument), though possibly less so these days.
Ultimately the spat, while minor, was more a spur for creative output (the track itself could arguably pass for as good as anything Carter did in the eyes of their fans) than anything ranking up there with the more successful outings for the record industry business model of manufactured rivalry. Like a well-thumbed street map however, the bands’ well-crafted understanding of place is rather lacking among today’s London-based acts, who no one will probably be talking about in 20 years’ time. For that reason alone, I, Ludicrous deserve to be able to smile from their desks toiling in IT jobs.