Skip to primary content
The settlement of foreign-born ethnic migrants has to be the oldest source of urban vitality. It’s also a wellspring of musical innovation. Might the latter connection offer insights into the modern city? That’s always my hope when I read books likeMigrating Music (Routledge, 2012). Edited by Jayson Toynbee and Byron Dueck, this volume addresses the cultural dynamics and social consequences of music that travels across borders. The most common scenario described within the volume is the diasporic one in which ethnic groups move to new countries and bring or rediscover their ‘homeland’ music. In other chapters, music migrates independently of a ‘native’ constituency. Hip hop takes hold of youth in countries with no basis in the African diaspora, this volume documents, while jazz performers and Brazilian genres might migrate at the behest of music industries and institutions. 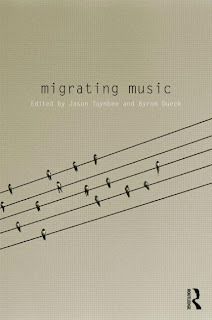 I’ve written recently about the prohibitive costs associated with recent edited volumes of musical scholarship. Although this was an issue when Routledge originally published Migrating Music in 2011, the book has now been released at a (comparatively) more affordable paperback price. The writings here grew out of a 2009 conference sponsored by the University of London’s School of Oriental and African Studies, and its contributors are predominantly based in European institutions. Accordingly, with a few exceptions the research gathered here was conducted in European settings, although the diasporic circuits that this volume charts extend into Africa, Asia and the Middle East. The omission of research on diasporic music in the Americas might irk readers looking for the latest thinking onbanda or reggaeton, yet as Toynbee and Dueck point out, “more than one-third of migration in recent years has been to Europe, making it the most important region of destination for migrants around the world” (pg. 13).
The book is organized into four sections. “Migrants” and “Translations” give respective emphasis to the listeners and forms/transformations of migrating music, while “Media” and “Cities” suggest the importance of material contexts for, respectively, disseminating and producing migrating music. As these edited volumes often go, Migrating Music is a bit of a mixed bag across the chapters. This is true perhaps more so in terms of its sections, which are otherwise well served by the various introductions prepared by the editors. While conceptually the importance of media and cities to the question of migrating music is inarguable, and (separately) the chapters within each section are generally quite interesting, these concepts’ development in the context of the volume’s organization isn’t as consistently up to snuff as the first two sections on “Migrants” and “Translations.”
Despite the title’s promise of entering new terrains, Migrating Music pays almost no attention to the digitally-circulated, club-focused fusions that sometimes get called World Music 2.0. (If this phenomenon doesn’t ring a bell, listen to music made by MIA, Diplo and Moombahton, or check out the writings of Wayne Marshall andLarissa Mann.) So, Pitchfork readers may find very little here to make their hearts skip a beat. A possible exception is Helen Kim’s chapter, “‘Keepin’ It Real’: Bombay Bronx, cultural producers and the Asian scene,” which examines the London Asian urban music scene in which a “post bhangra” sound incorporates fusions with hip hop, dancehall and R&B. However, her concerns in this chapter aren’t musicological but instead more reflective of a cultural studies agenda, e.g., how generic distinctions (here vis-à-vis the tasteful, drum-n-bass-flavored “Asian Underground” associated with Talvin Singh and Nitin Sawhney) reflect contested ideas about British Asian youth identity.

This example highlights two defining features of Migrating Music. First, the intellectual undertaking here is typically rooted in the anthropology and cultural studies traditions. I confess a little disappointment that there’s almost no musicological analysis (much less music criticism) in Migrating Music, if only because as a sociologist I’m most familiar with the social scientific approaches. Who knows, maybe the musicologists and critics will find these approaches a valuable corrective to the scholarship they’re used to. But as cultural studies is especially prone to do, these approaches support a narrative that eventually abstracts out of the particularities of their subject matter—the historic/geographic contexts, collective dynamics, and cultural artifacts including the music itself—to arrive at a recurring set of social functions: the collective negotiation of identity, the restoration of community, national/ethnic reaction to change from without, etc.
Social science writing shouldn’t have to be a poetry contest, of course. At one level, the predictability of these scholarly ‘punchlines’ reminds us of the stability and durability in the organization of the social world, without which the social sciences would be lost. But it would be nice to hear these general facts of the social world within the music, wouldn’t it? In this regard, the most notable chapter is “Un Voyage via Barquinho: Global Circulation, Musical Hybridization, and Adult Modernity, 1961-9″ by Keir Keightley. Reviewing the ‘migration’ (really, the diffusion by key composers, filmmakers, and media gatekeepers) of the Brazilian bossa nova via the Roberto Menescal/Rondaldo Bôscoli composition “O Barquinho,” Keightley describes the emergence of a very particular, indeed now quite retro, structure of musical feeling: that sense of pre-rock “adult modernity” associated with early-1960s signifiers of James Bond-cool and the jet-setting journey into the “now.” (Later groups like Stereolab, Portishead, and Broadcast mined this specific musical vein quite well.) Keightley’s critical analysis of a key track (from Francis Lai’s soundtrack to the the 1967 film “Live for Life”) makes the reader want to listen closely:

Consuming the adult good life, whether via jet or wine, appears as the imperative of a new sensibility; why else would the injunction “live for life” be necessary? The chord progression’s half-step drop occur and reoccur, creating an effect suggestive of lingering in one place and thn moving onto another. Presenting a montage of moments at both the lyrical and musical levels, the song’s harmonic instability and pleasurable pausing remind us of the restless mobility that characterizes the global consumption at issue (pg. 119).

AMINA: Salaam. Where are you speaking from, Farahnaz Jan?
FARAHNAZ: I’m from—in the north…
AMINA: And are you married?
FARAHNAZ: Yes, I’m married.
AMINA: Farahnaz Jan, do you listen to music?
FARAHNAZ: Yes, I listen to music, especially to the BBC. When I go to the kitchen I take my radio [mobile telephone] with me and listen every minute I’m in there. This is the song I want to sing.
[Farahnaz sings]
AMINA: Farahnaz Jan, thank you very much. I thought I could hear someone in the background while you were singing. Is there anyone else with you who would like to sing?
FARAHNAZ: No, there’s no one around because my husband’s very strict. That’s why I came to the kitchen as soon as my phone rang.
AMINA: I hope your husband is not too strict.
FARAHNAZ: Because of the situation in this country and because we’re in a village, people feel they have to be strict, they’re so nervous about upsetting someone.
AMINA: Your husband won’t be upset if he hears you singing on the BBC?
FARAHNAZ: He doesn’t know my [singing] voice that well!
AMINA: Thank you very much (pp. 189-90).

Ultimately, I think it goes too far to suggest that such mass-mediated musical exchanges occur outside the auspices of urbanism (as social condition). My view on this isssue may be more philosophical than empirical, but it seems that what Georg Simmel and Max Weber would recognize as the techno-rational media for modernity—in this case its structured encounter with the ‘other,’ the abstract reflection such encounters facilitate, and (ideally) the civilizing effect that results—emerged in fundamental respects out of the historic cauldron of city life. To acknowledge that modernity has since escaped its original setting hardly means that indicated urbanism has lost its significance. On the contrary, giving a nod to Louis Wirth, urbanism is now a portable way of life. In this way, perhaps new encounters with urbanism are among the best of what migrating music offers its listeners.