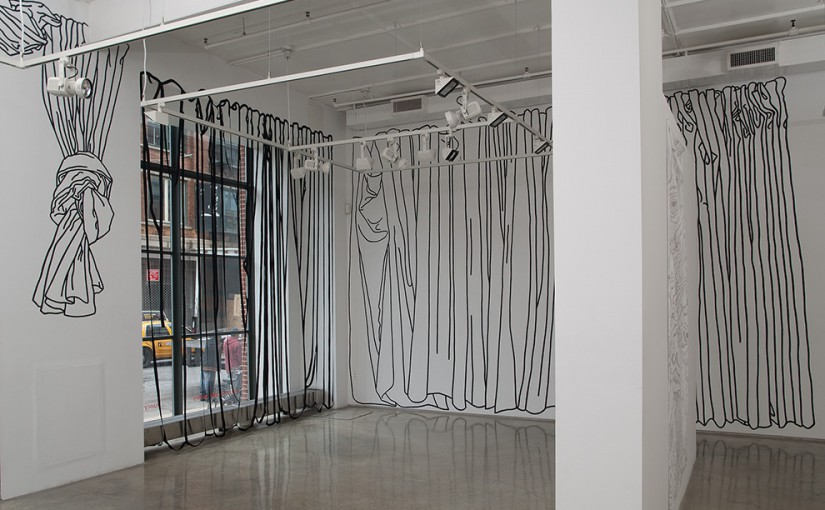 The nature of cloth, the fold, its structure, the ways in which it is thing and metaphor – The fact that its thingness is so slippery.  When cloth is not made into a thing, a jacket a dress, it’s thingness gets hard to pin down.  Its scale can shift at a moment’s notice, a handkerchief, a napkin, a sheet, a tarp, a sail.  I find the physicality of closely observing, of reinventing the world, touching through observation, internalizing  a curve, a fold, the material nature of our world, the substance of the thing itself and the substance of the stuff one can use to talk about the thing, a sensuous experience.  When two categories of material collide in the making of the object, the disparity of structure, hard/soft, rigid/fluid, self-contained/susceptible to their surrounding for their shape, I am interested.  These anomalous juxtapositions that transpose givens, that belie our assumptions in ways that are clearly “off”, but that convince as a new whole, a new probability, that is both straight-forward and uncanny.  In this installation/exhibition I seek to enfold the viewer both externally and internally. Harry Roseman, December 2011

The main part of the exhibition will be a site-specific black and white line drawing painted directly on the walls. Also included will be works linked thematically to the installation. The site-specific drawing will envelope the gallery in draping and folding cloth illusions. The two-dimensional soft flowing drapery as it winds through the space creates an idea of three-dimensionality. Fascinated by the dichotomy of opposites hard, soft, rigid, fluid, Roseman makes an exciting partnership between these contrasting elements. – Nancy Margolis Gallery Press release, December 2011