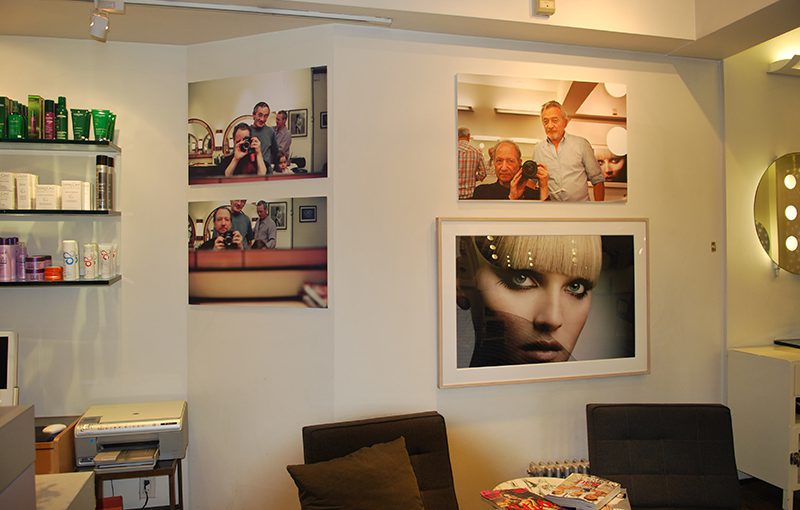 This Installation was somewhat different than the other local business projects.

It was meant to be temporary and was conceived as being somewhere between an exhibition and an installation. Unlike the other projects in this series, there was an announcement and an opening. My name was included on the announcement and the images are mostly self portraits.

It had in common with the other projects in this series the fact that it took place in a business where everyday business activities were conducted during the life of the installation/business. It also celebrated the everyday activities and interactions of going about one’s business. In this case, getting your hair cut.

Harry Roseman notices small things, many small things, and people and conditions, and keeps track of some of them… with his camera… in various categories: groups, things that are covered, visitors. Since 1971 he has photographed all visitors to his home. Cataloging helps navigate the overwhelming information.

When he was in the fifth grade Harry realized that no one was taking pictures of his life. With a new camera he lined up his classmates in front of the school so that he could have that record. He has been willing his vision, his dream of order, on friends and associates ever since.

People he sees while running errands are no exception. There is always time for Harry to shoot an overlooked arrangement which he organizes into “Local Business.” At “On Location” which prints his work there is a wall of mounted pictures in the middle of which is Harry’s photograph of the wall. At his dry cleaners there is a picture of the rack of shirts behind the actual rack. Often it is visible. The cellophane shrouded clothing forms a curtain through which we see its image.

The selection at Sacha & Olivier is culled from “Self Portraits.” As with “Local Business” it is edited and arranged here to echo or resonate with the space.

As Sacha & Olivier enter a new partnership and prepare to renovate, this show commemorates the time passed if not the very nature of time passing and of photography’s role in observing the tide.

For over 25 years Harry has had his hair cut by Olivier. For the first few years at Olivier’s Apartment on Cooper square. Then later at his and Sacha’s current location, Sacha and Olivier’s on 18th Street. Their hair went from brown to gray as the film went from black and white to color and then from film to digital.

Harry’s deadpan look remains. No irony, no drama. His affection for the quotidian is consistent with a downtown performance aesthetic with which he was involved. Harry Roseman was in Robert Wilson’s first efforts when they were students together at Pratt.

Five years ago it might have seemed preposterous for an artist of Roseman’s stature to show in a shop that was not a gallery. Increasingly we appreciate endeavors that travel outside the rarified art ghetto. The relational thinking that has been celebrated by artists in the last decade is an impulse that goes back to 1968 to the situationists in Paris, the Judson Church in NY. Graduating from Pratt that year Roseman embraced its values and has held onto many of them.

He considers the way we look at things and the conditions under which we look. Placing this work in the situation in which they were made, he blurs one edge and clarifies another. A picture of a Nico like blonde which usually occupies a wall of the salon now shares that wall with a Roseman photograph in which it is repeated. In the Roseman two graying men in the mirror show their humanity while the blonde woman in the photograph remains flawless.
Real trumps ideal in the march toward the inevitable.

Time is the real protagonist here. Portraits over time reveal aging, even more so when the subject is a haircut. Across nationalities and centuries a boy’s first haircut is a rite of passage and the hair is often saved. Rituals help us attend to the vagaries of life. Harry Roseman appreciates the wonder of daily interactions and encourages us to do so, as he turns the everyday into a ritual and necessity into art.