The ancient Incan civilization first began developing settlements in coastal and highland regions of the Andes mountain range in Peru between 3000-1800 BC. The empire started and was centered in the capital city of Cuzco. Despite a lack of many modern advances such as the wheel, powerful draft animals, currency, or even an advanced written language, the Incas developed very advanced technologies and systems to adapt to their environments. An elaborate road system connected the distant mountain cities, and the aqueduct system in place greatly impressed the Spanish upon discovery. The advanced highway and hydraulic systems provided the framework for a successful empire. 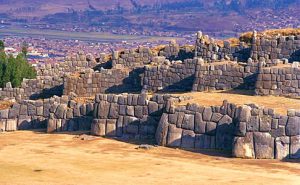 Remains of a defensive wall at Cuzco. The capital was rebuilt upon the arrival of the Spanish.

The network of roads connecting the empire stretched across nearly 25,000 miles. The sophisticated roads were were constructed with very limited resources, and rope suspension bridges were built to impressively cross ravines.The impressive aqueduct system of the Incan empire functioned to irrigate agricultural terraces and bring fresh drinking water into the cities. The aqueducts, often build on the sides of mountains, collected water from the mountains for distribution elsewhere. The same aqueducts are still used extensively today. The stepped agricultural terraces created more space to grow crops than was available in the valleys. Additionally, the large surrounding mountains blocked sunlight from the valleys; the terraces insured more direct sunlight for more of the day. The terraces also allowed for better control of water for irrigation. The systems of irrigation protected against flooding and allowed the Incas to reliably produce long term food supplies at an extremely efficient rate. People around the world continue to visit the beautiful terraces at Machu Picchu. This site was built as a retreat for the Incan emperor. Tourists can see how the aqueducts transport water because the system is still functional today. 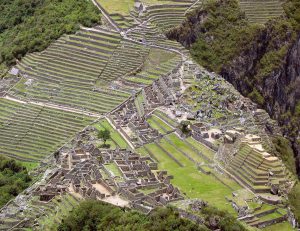 The agricultural innovations of the Inca serve as a model for successful adaptation of cities to their environments and conditions. The Incas utilized their mountainous surrounding to maximize the efficiency of their agriculture and irrigation systems. These advances boosted agriculture not only for the Incan civilization, but the Sacred Valley of the Incas continues to be Peru’s most productive region. While complete sustainability may be nearly impossible to achieve, the Incas of Peru successfully adapted to their conditions in a lasting way that improved the success of their cities for generations to come. The study of their innovation and adaptation can be applicable to modern cities and for developing systems of sustainability in our modern society.

The Incas: History of the Andean Empire