Archaeology is commonly associated by the masses with the ancient, intangible, and ultimately “unimportant” past. However, in the field of study known as contemporary archaeology, this could not be further from the truth. Contemporary archaeology “focuses on the most recent (20th and 21st century) past, and also increasingly explores the application of archaeological thinking to the contemporary world” (“Contemporary Archaeology.”). As the real-world applications of this new discipline have become apparent, more and more attention has been paid to this emerging field, such as when Jason De Leon, a professor who researches, among other things, contemporary archaeology at the University of Michigan, won the National Geographic Emerging Explorer in 2013 for his work in this field. 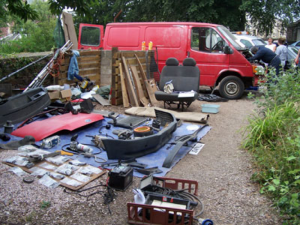 The van being excavated.

In 2006, a group of archaeologists from the Department of Archaeology and Anthropology at the University of Bristol explored the potential of contemporary archaeology by performing an archaeological excavation of a Ford Transit Van (Schofield). 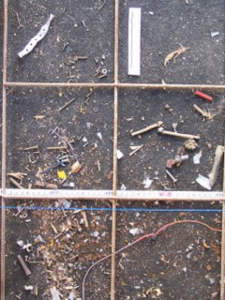 Some of the artifacts found during the excavation process.

Over a several month period, researchers Schofield, Bailey, Newland, and Nilsson excavated “three main stratigraphic layers in the rear of the vehicle: a carpet, a plywood lining and the metal body” (Newland). Some of the more unique artifacts discovered during the excavation, “a seventeenth century potsherd, slag, a Victorian threepenny bit, and the types of pencils typically used by archaeologists”, were evidence of the van’s past service as transport for field archaeology projects by the university (Schofield).

They also used forensic methods, such as dusting for fingerprints on the body of the van, to conduct their research (Schofield). This unique form of investigation led to an interesting discovery: no finger prints were found on the body of the vehicle (Moran). When they researched further, it was discovered that this particular model was one of the first in the country to be built solely by robots, thus coinciding with a number of layoffs at a local plant and the increased movement towards automated labor (Moran). This is an interesting example of how contemporary archaeology can reveal patterns in modern society and shed light on their effects 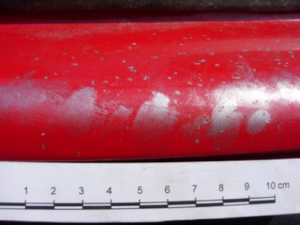 Some fingerprints revealed on the driver’s door.

.We live in a material culture, one which produces a vast amount of waste and puts a large amount of emphasis on the importance of ownership. It follows that because of this, archaeological sites are being mass-produced daily. It seems only logical to use the tools of archaeological inquiry to study our culture to better understand that issues that we face today. The van study was a unique expression of this new area of research and its potential to take archaeology in a radically new direction. 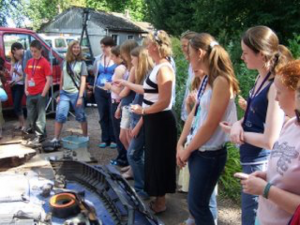 Summer school students visit the excavation site and learn about its significance.