Conflict and warfare have always posed threats to buildings and sites that hold cultural significance. Examples range from the destruction of Tenochtitlán during the Spanish ‘conquest’ to current destruction of sites in the Middle East by the Islamic State. ISIS’s destruction of one site in particular, Palmyras in Syria, has recently made news. Palmyras was a city at the crossroads and major trading center between the Mediterranean and Mesopotamia. 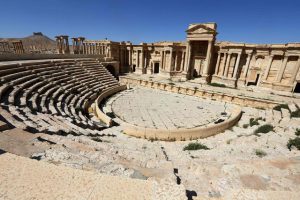 Though records of the city go back for 3,800 years, the height of the city was under Roman occupation in the 3rd century A.D. Its mix of merchants from many cultures lead to Palmyras’ unique architecture and blend of Roman and Near Eastern styles (Romey). Palmyra was once of Syria’s most popular tourist location, until the outbreak of conflict in 2011 (Romey). 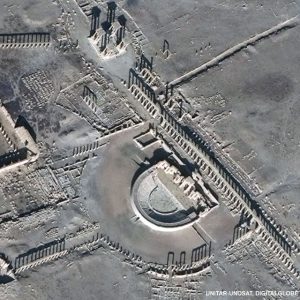 Satellite images showing the Roman theater (Dec. 26, 2016) before it was damaged 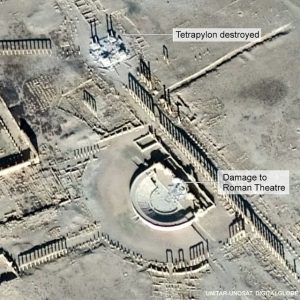 Satellite images of the Roman theater (Jan. 10 2017) after damage by ISIS militants

ISIS first captured Palmyra in May 2015, but were driven out by regime forces. They then retook the city on December 11, 2016 (Deeb). An ISIS leader announced in a radio broadcast on May 27, 2015 that the ruins in Palmyra would not be damaged (Almukhtar). However, as Syrian government forces moved closer to the city, the ISIS began to bulldoze and detonate structures such as the Roman Theater known as the Tetrapylon (2nd cen. AD), the Temple of Bel, which dated back to A.D. 32, and the Temple of Baalshamin. Before demolishing the theater they used it as a stage for executions and propaganda.

In August 2015 they executed Khaled al-Asaad, the former director of the Palmyra museum, outside the museum next to the ruins (“Syrian archaeologist killed in Palmyra by IS militants”). 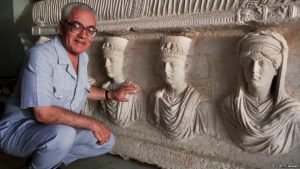 al-Asaad was imprisoned for a month before his execution, during which time ISIS members interrogated him about the location of valuable artifacts. One of ISIS’s main sources of revenue is the sale of artifacts they have looted (Harkin). In addition to looting sites, it is clear that ISIS has been using the archaeological site as a literal stage to give them national attention and advertize their platforms.

The destruction of these sites has been called a “war crime” by the the UNESCO spokesperson (“Palmyra’s archaeological heritage under ISIS attack”). Palmyra was a crossroad of different cultures and religions, which is evident in the fusion of Roman, Greek, and Near Eastern architecture. It has a “spirit of… encounter and openness” (“Palmyra’s archaeological heritage under ISIS attack”). It is this spirit, which the historical site embodies, that makes it so anathematic to ISIS. By destroying the historical evidence of religious and cultural tolerance and killing people that share this knowledge like al-Asaad, ISIS hopes to destroy the future of tolerance in this area.

More on the destruction of the Temple of Baal: https://www.nytimes.com/2015/09/01/world/middleeast/isis-militants-severely-damage-temple-of-baal-in-palmyra.html

More on the destruction of Palmyra: https://www.nytimes.com/2015/09/01/world/middleeast/isis-militants-severely-damage-temple-of-baal-in-palmyra.html

List and descriptions of other sites ISIS has damaged or destroyed: http://news.nationalgeographic.com/2015/09/150901-isis-destruction-looting-ancient-sites-iraq-syria-archaeology/

More on ISIS’ looting of antiquities to fuel the Iraq Insurgency: http://news.nationalgeographic.com/news/2014/06/140626-isis-insurgents-syria-iraq-looting-antiquities-archaeology/