When thinking about archeology and the preservation of organic materials one usually thinks of the archeological sites in dry environments or cold environment. Thinking of preserved bodies many think first of the mummies of ancient Egypt or of the Ötzi, the frozen iceman found in the Alps. However, another major location for the preservation of organic materials in archeology is wetland sites, especially the peat bogs in Europe.

Bog bodies refer to the corpses that have been naturally mummified found in these bogs. Two such bog bodies were found in 2003 in Ireland less than three months apart. Based on carbon testing the partial corpses found twenty-five miles from each other had lived and died during the height of the Celtic Iron Age (archive.archeology.org). The Clonycavan Man, a corpse that was only recovered from the torso up, was shown to have lived between 392 and 201 B.C. Whilst the Old Croghan Man, a torso with only the arms, was dated to have lived between 362 and 175 B.C. Both corpses had been of young, healthy men who had been violently killed, the Clonycavan Man having been struck by a stone ax, splitting his skull, and the Old Croghan Man having been decapitated, stabbed and cut in half. Many of the other wounds on their bodies imply that they had been tortured before their death, possibly as a part of a ritual, especially as both corpses had their nipples pinched and cut off (irisharcheology.ie).

Archeologists studied these two corpses, learning not only about the deaths of these two men, but learning about the lives they had lived. There were few signs of physical labor on the men, and there was much evidence found of the Old Croghan Man’s wealth and higher status.

The nails, hair and stomach of the Old Croghan Man were so well preserved in the bog that researchers were able to conclude that due to his well-kept fingernails, lack of calluses and good diet he had been an “individual of relatively high status” (Archeology Essentials).

The keeper of Irish Antiquities at the National Museum of Ireland, Eamonn P. Kelly, used the information learned about the lives and deaths of these men to develop new insights on the Celtic culture of Ireland in the Iron Age. Kelly interpreted these brutal, almost ritualistic killings, of two well-to-do men as the killings of “failed kings or failed candidates for kingship,” as the loss of their nipples would have been a sign of no longer being fit for kingship, whose bodies had been an offering to a Celtic goddess (archive.archeology.org). The analysis of these bog bodies was able to give more of an understanding of the culture that lived over 2000 years ago, presenting beliefs and rituals of the time through the similar wounds on the bodies, connecting two separate archeological finds from wetland sites to one another. 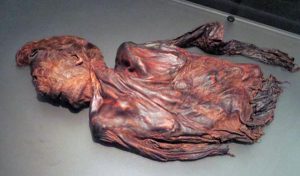 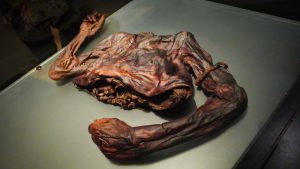