An interesting glimpse into the impacts of past climate change is the case study of northern Cuba conducted by Jago Cooper and Matthew Peros. Unfortunately, an exact timeline for past climate change is very difficult to obtain. Michael Calway notes in his article regarding past South American droughts that some methods such as ice or sediment cores, while useful, are unreliable in this case and do not create particularly accurate timelines. Luckily, Peros and Cooper were able to access written records of past climate events. In their research, Cooper and Peros discovered not only a cycle of hurricanes and rising sea levels in Cuban history, but also techniques the ancient Cubans used to deal with these problems. One such technique is evident in their architecture. Most houses in the case study area were away from the coast on low, flat ground. They also incorporated a stilted design to allow water from storm surges to flow under the house rather than batter its walls. Another important aspect of the early Cubans’ adaptations is their methods of gathering food. The diet of these societies consisted primarily of things taken from shallow, intertidal marine environments. During a storm, however, these environments could be drastically altered, so the Cubans diversified their diet to include food collected from deeper marine areas. This allowed them to continue to find food even when sea levels were high. 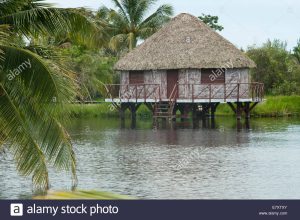 These methods for survival are directly applicable to the current situation in the world. One recent example is the devastation caused by hurricane Irma of the southern coastal states. Modern societies could learn things from ancient ones, like not building too close to the water in hurricane-prone areas. Another example could be to diversify food sources so that no one is cut off in the event of extreme flooding. 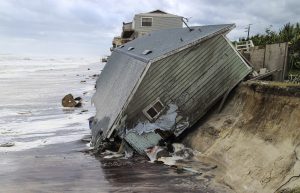 Unfortunately, when it comes to climate change, hurricanes are not the only problem to be faced. Future humans will also have to deal with higher average temperatures, polluted air/water, and other types of storms. It is unlikely that human intervention will drastically slow climate change, but with any luck, people will be able to look to the past to find ways to survive.