As with many countries around the world, Cambodia carries a complicated and destructive history. These conflicts have aided in the looting and destruction of its heritage sites, especially ancient temples.

One of the most famous Cambodian examples is Angkor Wat, a Hindu temple built in the 12th century in honor of the god, Vishnu (Glancey 2017). During the Khmer Rouge regime and collapse, heritage sites like Angkor Wat became places of destruction caused by war in the latter half of the 20th century. Protection, maintenance, and access to Angkor Wat was limited because of the Rouge’s presence in the surrounding area (Glancey 2017). Even if the fighting wasn’t going on at the site itself, surrounding fights made the area dangerous and abandoned by tourists, locals, and site caretakers (Reap 1997). This hurt the influential tourist trade, meaning less money to fund the upkeep and protection of the site (Reap 1997). 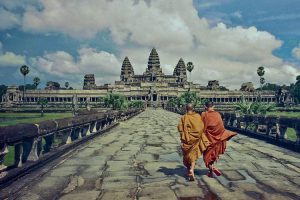 However, it is not just oppressive regimes that directly destroy archaeological sites. The Khmer Rouge looted heritage sites and temples, but also prevented the protection and continued study of temples like Angkor Wat. In addition, the Khmer Rouge contributed to the desecration because its collapse meant that Cambodia was no longer shut off to the world, therefore open to foreign looters and the illegal antiquity trade. People like Khmer Rouge leader, Ta Mok, had 20 to 30 tons of stolen artifacts at his home when he was arrested in the late 1990s, but “as the Khmer Rouge communist insurgency [collapsed]…many hidden site have suddenly become open to the raiders” (Mydans 1999). 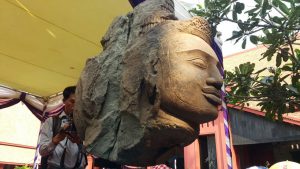 In Cambodia’s case, the attempt to protect archaeological sites can also create conflict. Cambodia and Thailand clashed when the temple, Preah Vihear, was declared to be in Cambodian territory in 1962. This was only exacerbated when Preah Vihear was promoted to World Heritage status by UNESCO in 2009, a “conflict resulting in several civilian and military deaths” (O’Reilly 2009). Throughout the 2000s, the dispute resulted in various damages to the temple itself by both Cambodian and Thai gunfire (UNESCO 2011).

Cambodian temples, and heritage sites in general, are not only culturally significant for their origins, but also for the power struggles that they create. These conflicting power struggles can be over the sites, in the case of Preah Vihear, or damage the sites, as seen at Angkor Wat and Preah Vihear. While looting and raiding erase important archaeological evidence and context for the purpose of an individual’s gain, the occurrence themselves is another chapter in the story of the history of the sites.