During WWII, over 900,000 Jewish deportees were killed and buried at the Treblinka death camp in Poland. The Nazis left Treblinka in 1943, but not before knocking down all buildings and leveling the earth. They then built a farmhouse on the stripped land, planted trees, and installed a Ukrainian farmer on the area. An investigation of German crimes in 1946 found the remains of burnt posts, foundations of a building and well, and sections of paved road. The investigation also discovered human remains buried in the ground. However, none of this information alluding to the site of a mass murder was reported to the public. Despite witness testimonies supporting the concept of a mass grave at Treblinka, the reported lack of physical evidence failed to produce further investigation. 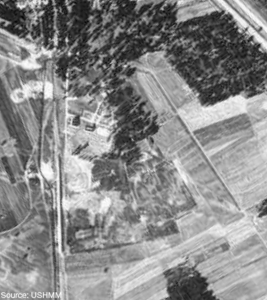 This aerial photo from 1943 following Treblinka’s closure shows an empty area of land, apart from the farmhouse at top left. Archaeologists have found that the farmhouse was in fact constructed using bricks from the dismantled gas chambers.

These German crime investigation reports remained the most complete studies of Treblinka until 2010, when a team of archaeologists began working on the area. In order to respect Jewish law and tradition banning the exhumation of the dead, they did not excavate the area. Instead, the team uses noninvasive technologies such as aerial photography, ground-penetrating radar, GPS, and lidar. These methods have identified the traces of probable undressing barracks, gas chambers, and burial/cremation pits. One of the burial pits found was recorded as 26 meters long, 17 meters wide, and 4 meters deep. Five more pits of similar sizes are located nearby, each revealing the massive scale of the atrocities committed at the site.

Surface survey has also found items on the ground surface at Treblinka, including human bone, which correlates to witness testimonies of improvised cremation methods. According to survivors, the camp did not decide to cremate bodies until it had been open for several months, and due to a lack of a purpose-built crematorium, they began burning bodies on makeshift pyres. These cremation results would not have eradicated bone, which has resulted in the presence of bone fragments at the site. Personal and everyday items have also been found at the site by means of surface survey. 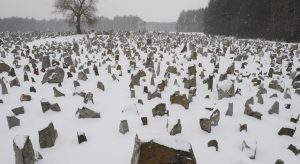 A photo of the current memorial at Treblinka commemorating the 900,000 Jewish people who were killed at the site.

Treblinka was not the only death camp left empty by the Nazis. Two other camps in Poland, Bełżec and Sobibór, were also razed completely after their closures. For this reason, these camps have receded into the historical background compared to Auschwitz, which was discovered with gas chambers still standing and thousands of prisoners still alive. The Nazis also destroyed all written records, leaving the only source of evidence of the mass murders at these sites as witness testimony. Until this project, it seemed that Treblinka and its memories had been wiped off the face of the earth. The work of the archaeological team at this site demonstrates the power of archaeology to at least partially bring back lost knowledge and memory. The team is planning on long-term collaboration with the Treblinka museum in order to continue unearthing new physical evidence at the site and to allow the victims to be properly commemorated.