Archaeologists often find graves with little to no accompanying documentation of the people buried or their communities and cultures. It is the job of the archaeologist to figure out as much about the deceased as possible by looking at the inscription, composition, and location of their gravestones. 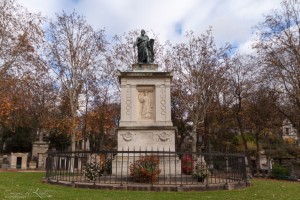 Pictured above is the grave of a Casimir Perier, born on October 21, 1777, died on May 16, 1832. With the Internet, I can easily learn who he was, how he died, when he died, and what he did when he was alive. But what if I didn’t have access to such a large database? If the only clue I had was the gravestone itself, how would I figure out what kind of person was buried there?

Perier’s grave is one of the few tombs with it’s own lawn and garden area. In fact, it is completely surrounded by a fence. This discourages the public from walking up to the grave, and suggests that distance between the two was desired at the time of its erection.

Perrier’s grave is the centerpiece of this section of the cemetery.

Without reading the tomb inscriptions, it’s easy to see that the person buried here was not only important but was prosperous in either money or friends. The monument is made of marble and topped with a bronze statue of Casimir Perier. Marble is more expensive than the stone used for the majority graves seen in the Père Lachaise Cemetery. Furthermore, the grave is almost four meters high, making it one of the tallest and therefore most expensive monuments in the cemetery. The people that buried him made sure his grave was far more impressive than those nearby; a great amount of money went into his grave. Only a wealthy man, or one with wealthy friends could afford to be buried here.

On top of the grave, Perier is garbed in a toga over regular European style clothing, a combination only seen on statues of diplomats. He holds a plaque that reads “ Charte De 1830.” On the bottom of the statue lies an excerpt above lady eloquence that roughly translates to “Seven times elected Deputy Chairman of the Cabinet under Louis Philippe I. Defended eloquence and courage and freedom and national dignity in the interior peace.” I now know exactly who Perier worked for, how long he held his position, when he was most influential, and what direct effect it had on the nation.

Without any information from the internet I’ve discovered that Casimir Perier was known for his eloquence and served as Deputy Chairman of the Cabinet under King Philippe I seven times. He was most influential as Deputy Chairman of the Cabinet in 1830, and was quintessential to upholding France’s dignity. He was greatly valued in life, and his monument in death far outshines those around it. The fencing, however, is used to aesthetically create a barrier from anyone walking through the cemetery. His time as president created disparity between the government and the public.

After confirming that the information gathered from Perier’s tomb is indeed accurate, it’s easy to see why archaeologists use graves to understand the lives of the deceased. The inscription, composition, and location of gravestones are all key in learning more about past communities, and in Caismir Perier’s case, whole nations.