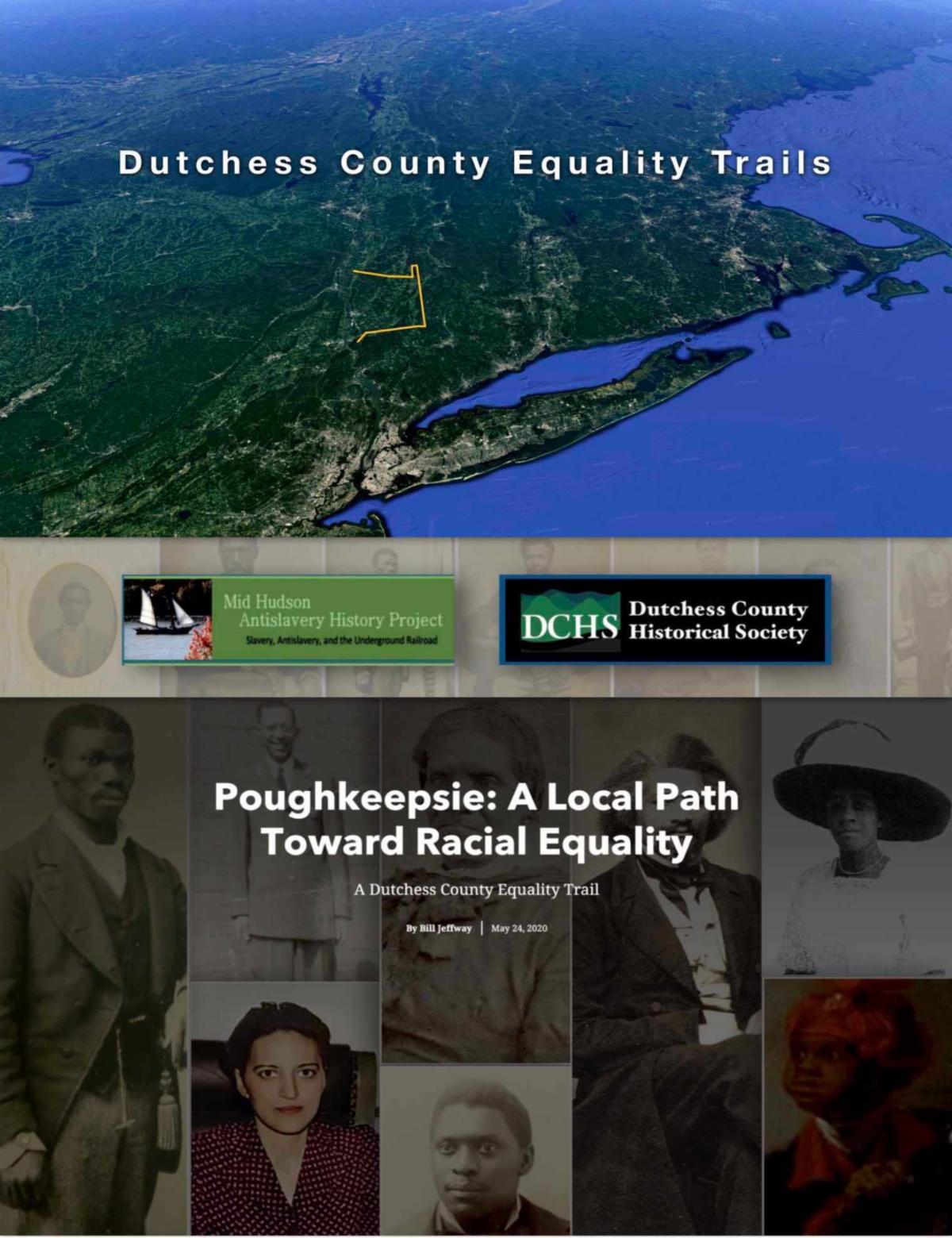 Recently, MHAHP has been working with Bill Jeffway, Executive Director of the Dutchess County Historical Society, to begin developing a digital “freedom trail” to follow the development of enslavement and freedom in our area. The first effort toward this —
Poughkeepsie: A Local Path Toward Racial Equality — is shown here.
As Bill has written: “Those of us who feel that local history offers powerful, relevant lessons need to make a greater effort to organize and deliver the lessons in a compelling and relevant way.
Stimulated by the quality and scale of research done by MHAHP, DCHS joined forces with them to develop the Poughkeepsie Equality Trail, with a view to providing a kind of educational tour that can be taken on the street, or virtually from home.
The Poughkeepsie Equality Trail sits within an emerging DCHS online library dedicated to support the studies of African Heritage and Black History. Additionally, we hope to continue to partner with MHAHP to support the creation of such trails elsewhere in the Hudson Valley.”
We hope you will give us your feedback on this effort as it develops. To see the Trail, visit the website of the Dutchess County Historical Society at https://dchsny.org/PET/

The murder of George Floyd has unleashed a swelling of sorrow and anger across the United States. Yet again … yet again … a black person has been killed at the hands of white authority. It seems trite to say that we have seen this too often. We have, for sure. But we also know that the history of our country is bound with the racial exploitation of black people to the betterment of whites.

Today, the Mid-Hudson Antislavery History Project stands with the Floyd family and all friends of justice and equality. We know that the injustices of slavery, racism and oppression were part of the history of our own Mid-Hudson region, just as much as across the wider America. The first black enslaved people were brought to our area in the late 17thcentury, and the last of the enslaved weren’t freed until 1827.

The mission of the MHAHP is threefold: to research the history of slavery, antislavery, and the Underground Railroad in the mid-Hudson region: to interpret this history and share these interpretations with residents, visitors, and wider audiences; and to place this local history in the broader context of racial slavery in the New World, the African American experience, and the impact of this history on subsequent struggles for racial and social justice.

Through lectures, workshops, song, teaching, books and community alliances, we commit ourselves to continuing our mission. And we stand today united with the Floyd family, the African American community, and all people fighting for a just and equal United States.

Our friend and colleague, F. Kennon Moody, died on April 11, at his home. Ken was 86, and living at The Fountains in Millbrook, New York. He is survived by his son David, his daughter-in-law Eileen Guilfoyle and their two children, Sophie and Gus, as well as by his daughter Laura Hoskins, her husband Dan, and their two children Min Ho and Madeleine. His wife of sixty years, Mary Law Moody, died March 28, 2019.

Ken was involved in education, social justice work, religion and history his entire adult life. He received his Masters of Divinity from Yale Divinity School, and taught for a while as a history professor at Dutchess Community College. He received his Ph.D. in American History from SUNY Albany, where he wrote his dissertation on Franklin D. Roosevelt.

Ken worked as a professional Roosevelt researcher and contributed to more than a dozen books, a PBS special, and ultimately authored his own book, FDR and his Hudson Valley Neighbors. Throughout his life, Ken was devoted to community service. A memorial service will be scheduled once gathering restrictions are lifted. In lieu of flowers, donations can be made to the Dutchess Interfaith CROP Hunger Walk, P.O. Box 968, Elkhart, IN 46515.

Ken was instrumental in the formation and success of the Mid-Hudson Valley Antislavery History Project.

The talk will be held at the Jewish Congregation of New Paltz Community Center.

The War Before the War: Fugitive Slaves and the Struggle for America’s Soul From the Revolution to the Civil War

The Franklin D. Roosevelt Presidential Library and Museum will present an author’s talk and book signing on Sunday, February 9th, 2020. The program will take place at the Henry A. Wallace Center, and it begins at 2:00pm.

The talk by Mr. Delbanco is being co-sponsored by the Rhinebeck Reformed Church, the Jewish Federation of Dutchess County, and the Mid-Hudson Antislavery History Project. After Mr. Delbanco’s remarks, he will be signing copies of his book, which can be purchased at the Wallace Center gift shop.

This is a free public event, but registration is required. To register, go to https://www.fdrlibrary.org/events-calendar, or call 845-486-7770.

Diane’s presentation will include remarks on the recent Network to Freedom training program held at Niagara Falls … Crossings: Bridging the Authentic Underground Railroad from Past to Present.

The presentation is free, but please register at https://www.fdrlibrary.org/events-calendar.

The next meeting of the Mid-Hudson Antislavery History Project will be held as follows:

If you have  an interest in the history of slavery and antislavery in the Mid-Hudson region,

At the meeting we will be providing updates of recent programs and a look ahead at some new ideas. Included will be information on the following:

The Mid-Hudson Antislavery History Project is a founding member of the Consortium and is participating in the planning for the program.

This year’s program theme is “Crossings: Bridging the Authentic Underground Railroad Past to Present.” The four day training will feature renowned speakers, panel discussions, an exhibit hall, and tours of local museums and historic sites. The program will move away from the normal format of research papers and instead focus on training participants in how to conduct Underground Railroad research and programming for their respective sites. The NTF Program Committee welcomes proposals for case study presentations. The deadline for proposals is May 31, 2019.

For more information, including the Call for Proposals and the submission process, please go to: https://www.npa.gov/orgs/1205/professional-development.htm.

The Black History Project Committee of the Mid-Hudson Heritage Center

invites you to the

Ruth Thompson-Miller is Visiting Associate Professor of sociology at Vassar College. Her research specializations are race and ethnicity, mental illness, and the elderly. She received the American Sociological Association (ASA)–National Institute of Mental Health–Minority Fellowship.

She is the co-author of four books, including: Jim Crow’s Legacy: The Lasting Impact of Segregation; Systemic Racism: Making Liberty, Justice, and Democracy Real;  Not Your Grandmother’s Movement: Civil Rights and Black Lives Matter;  and Please Don’t Shoot: Children, Police Violence, and Trauma. She is the co-author of chapters in Counseling Psychology, Sociology of Racial and Ethnic Relations, and Violence Against Women.

Light refreshments will be served.

MHAHP will be presenting a four-session class on the topic of “Slavery, Antislavery and the Underground Railroad in the Mid-Hudson Region” for the Center for Lifetime Study (CLS). The Center is part of the continuing education program of  Marist College in Poughkeepsie, New York.

The class will examine the history of slavery, antislavery activities, and the Underground Railroad in the Mid- Hudson Valley. There will be one class devoted to slave resistance, which will examine closely the fugitives – ‘freedom seekers’ – who ran away from their owners. Other areas to be covered include how this local history fit within the broader national history of slavery and antislavery; the build-up to the Civil War and post-Civil War attitudes toward the emancipated men and women; and the legacy of enslavement in America. The evidence and myths surrounding the Underground Railroad will also be examined.

The Marist Center for Lifetime Study provides opportunities for intellectual and cultural exploration and development for men and women of retirement age. CLS provides a rewarding experience of learning and fellowship in a relaxed atmosphere without exams or grades. Currently, 650 members enjoy courses, trips, and social events held in various locations.

We dedicate this site to one of our founders,  Lorraine M. Roberts, who served as Treasurer from 2006 to 2014.  We miss Lorraine's warm smile, her financial acumen, her energy and enthusiasm for local history, and her good common sense. Lorraine, a retired teacher, was active in many organizations and served as chair of the Black History Committee of the Dutchess County Historical Society.  She was a light and inspiration to many in the Mid-Hudson Valley.  We miss her greatly.

A tribute to Lorraine's life and her work in the community is posted on the website of the Poughkeepsie Journal.

This work is licensed under a Creative Commons Attribution-NonCommercial-ShareAlike 4.0 International License.