Pollen dating, is one of the lesser utilized methods archaeologists have to determine a relative chronology or timeframe for a certain event. Pollen dating can determine a relative time frame far earlier than radiocarbon dating is able. Although, because of influences such as pollen transportation by wind for thousands of miles and the abundance of certain kinds of pollen, radiocarbon dating is necessary to give absolute dates.

Pollen dating is done by comparing the pollen zones in different rock layers or strata, comparing older, deeper layers to newer ones on top. The pollen zone is the particular time frame where specific species of plants release more pollen into the air than others. Using this, archeologists can determine climate changes, deforestation, or changes in the use of land hundreds of years ago such as the association between European settlement in North America and an increase in the amount of ragweed pollen found. Specific locations can even be determined as the origins for many rare or uncommon pollens.

Pollen can come in a variety of distinct shapes and sizes depending on the plant it is coming from. These microscopic grains are incredibly sturdy with outer shells made from sporopollenin, an incredibly inert substance. This allows the pollen to stay intact for thousands of years, especially when preserved in bodies of water, peat or, lake sediment. Ireland’s bogs are full of sediments and pollen, with certain layers linked to events such as the eruption of Icelandic volcanoes in 1104, 1362, and 1510 and an agricultural shift after the Black Death.

By looking at the sedimentary build up of pollen at the microscopic level, 400-1000x magnification, the pollen grains can be identified and the taxa concentrations determined, which can paint a picture of the climate as it changed over time.

Pollen can also be collected from the inside of pottery such as pots and stone tools, trapped in the fabric of clothes, the the cracks of floors and walls, or on other archeological artifacts and features. This can be used to help determine the diets of a people, their crops, and the materials they used to build their homes. By looking at these specific pollen samples as well as the layer of accumulated pollen, researchers can develop a better understanding of the environment and biodiversity throughout the history of an area. 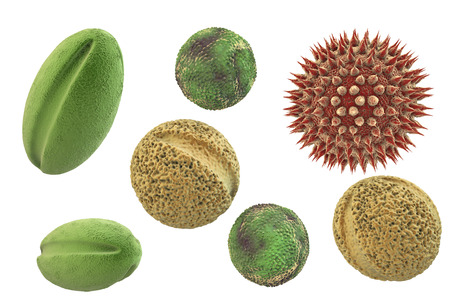