The Anti-Racism, Equity and Justice (AREJ) organization cordially invites you to join us for an evening of breaking down silos and analyzing anti-racism activities in our respective communities in order to build up collaborative relationships and dismantle racism.

We are convening on Wednesday, March 30, 2022 from 4pm-8pm in the Villard Room at Vassar College located at 124 Raymond Ave. Poughkeepsie, NY 12604. We will be providing dinner and entertainment as well!

Please register here ASAP as this is an in person event and space is limited!

Students and alumni will host a panel discussion reflecting on black experiences at Vassar. Come out on February 22nd at 5pm in Rocky 300 for a riveting discussion that promises to be entertaining and educating. The Anti-Racism, Equity and Justice (AREJ) Organizing Team is honored to sponsor the Good Work Institute for our March 22nd discussion at 12pm!

This mini-workshop provides an opportunity to explore a shared vision of Just Transition and consider the question: What will it take to build systems centered on care for each other and our shared home? How might our work play a role in social and ecological well-being? Through presentation, reflection, story sharing, and discussion, we will explore the Just Transition framework, principles and practices. You will have the chance to connect your own experience to extractive and regenerative economic paradigms and discuss ways you might weave Just Transition principles and practices into your anti-racist, equity and justice work.

The Anti-Racism, Equity and Justice (AREJ) Organizing Team invites you to our next event this January 11th at noon via Zoom!

We are honored to have Sharon Parkinson come speak with the group about salary transparency, a topic that is important for all of us whether we work in higher education at Vassar or for non-profit or private businesses in the Hudson Valley.  Please see the following readings that can provide you with some background information. Vu Le is the former Executive Director of Rainier Valley Corps, a non-profit organization in Seattle that promotes social justice by developing leaders of color, strengthens organizations led by communities of color, and fosters collaboration between diverse communities.

Sharon Parkinson will also talk about the new salary disclosure bill that was approved by the New York City Council: The Anti-Racism, Equity and Justice (AREJ) Organizing Team is excited to promote two workshops happening this February facilitated by the National Coalition Building Institute (NCBI) and sponsored by VC’s Office of Student Growth and Engagement and other offices!

The Anti-Racism, Equity and Justice (AREJ) Organizing Team invites you to our next Lunchtime Discussion on Tuesday, December 14th at noon.

The Lunchtime Discussion will offer a spotlight on white privilege awareness and education as provided by Willa Vincitore ’92, Senior Director of Alumnae/i Engagement from the Office of Advancement.

The Anti-Racism, Equity and Justice (AREJ) Organizing Team invites you to our next Lunchtime Discussion on Tuesday, November 9 at noon. cited to help promote the event “Transformative Justice is our Future and our Legacy” as sponsored by the SAVP office! The event will star keynote speaker Ejeris Dixon, who will discuss the meaning behind addressing intimate partner violence, sexual violence, and bias violence in contemporary times, as well as the meaning of blending creative visions for the future we want while holding the multi-generational genius of Black and Queer survivorship.

We hope to see you there!

The Anti-Racism, Equity and Justice (AREJ) Organizing Team invites you to our next Lunchtime Discussion on Tuesday, October 12th at noon.

As the title suggests, the Lunchtime Discussion will center on the racial segregation aspects of city design and development, which are founded from a long history of injustice in the city of Poughkeepsie. The event will be featuring Fringe Cities, Mass Design. The Anti-Racism, Equity and Justice (AREJ) Organizing Team is honored to promote and encourage you to attend Professor Ciccariello-Maher’s talk titled A World Without Police: How Strong Communities Make Cops Obsolete. The event will take place on Thursday, September 23rd at 5:30 pm in Rockefeller Hall 300 and via the Zoom link below:

Description of Talk: In his abolitionist manifesto, Ciccariello-Maher examines how a society built around policing and that presumes their necessity, sees the police as a one-size-fits-all solution for every social problem: poverty, mental health, a lack of opportunity, or inadequate afterschool or sports programs. Going beyond a diagnosis of the problem, Ciccariello-Maher turns to the long history of abolition and the uprising against the police in the summer of 2020 that cast police abolition into the mainstream imagination to explore what doing so might actually look like. With insights from communities in North American cities, as well as some in Latin America that provide models for protecting and caring for one another without the intervention from the police, this lecture outlines some of the tools communities use to build a world without police and beyond the prison industrial complex.

About the Speaker: George Ciccariello-Maher is visiting Associate Professor in the Department of Political Science at Vassar College. He is the author of We Created Chávez: A People’s History of the Venezuelan Revolution (2013), Building the Commune: Radical Democracy in Venezuela (2016). Decolonizing Dialectics ( 2017), A World Without Police: How Strong Communities Make Cops Obsolete (2021), and Anticolonial Eruptions: Racial Hubris and the Cunning of Resistance (2021). He is also a co-editor of the Duke University Press book series Radical Américas and his dispatches have appeared in The Nation, Jacobin, Salon, Huffington Post, Counterpunch, MR Zine, ZNet, Venezuela Analysis, Alternet, Warscapes Magazine, History Workshop Online, MediaLeft, The SF Bayview, and Wiretap Magazine. 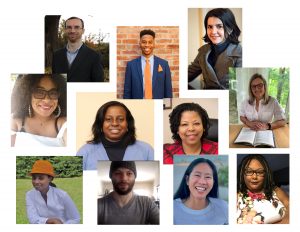 We would love to hear from you! If you have any questions about the team, our events, or anything else, please contact us here.