Basket weaving is one of the oldest crafts in Native American history. For the Wabanaki, basket weaving goes as far back as the very story of their creation. Historically, basket weaving served a heavily utilitarian role for Native Americans, but in recent centuries, trade has changed the cultural of baskets as well as their designs. (Neptune and Neuman, 2015)

In Northern California for example, the structure and design of a basket often denoted its function in society. Some examples of different woven baskets include seed beaters, storage baskets, cooking baskets, and hats. Seed beaters, used to knock the seeds off grasses and other plants, as well as cooking baskets generally lacked ornate patterns and designs due to their utilitarian usage. Hats and other more formal basketry on the other hand were more ceremonial and would have more ornate designs and patterns. 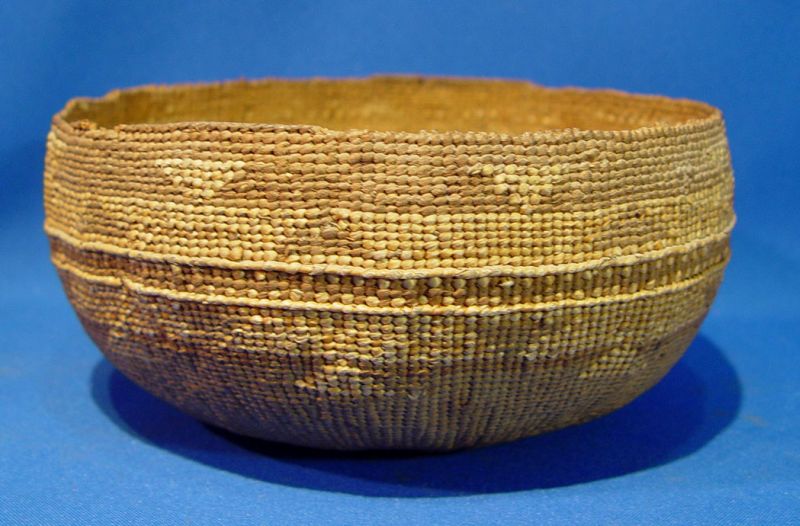 For Native Americans in Northern California, large baskets like this were used for cooking. Photo from https://www.antiqueamericanindianart.com/nocal-basketry-forms.html

In the 18th century, woven baskets started gaining popularity as a trade item. As hunting and gathering rights began to get encroached, weavers started to make baskets for the purpose of making money to buy food instead of their original uses as tools. Towards the end of the 18th century, the basket weaving industry began to flourish leading to intricate new basket designs, structures, and forms. The designs of baskets began a transition from the utilitarian and ceremonial wares they were to the part of popular Native American culture they are now. (Shelton, 2019)

Along with the emergence of the basket weaving industry, new technologies also lead to changes in how the baskets were made changing their designs further. In the 1860s for example, aniline dyes became involved the basket weaving process for some Native American groups in Maine due to its ability to save time and labor. The introduction of these dyes allowed for more vibrant colors and lead to a more diverse color palette. Later in the 1880s, new manufacturing technologies such as wood splitters, gauges, and blocks lead to more changes in woven baskets and their designs. Blocks helped hold the basket’s shape allowing basket makers to create smaller, fancier, and more decorative baskets. In the 19th century, baskets began to be embellished with fancy handles, sweetgrass, decorative weaves, and dyed splints due to Victorian influence. (Neptune and Neuman, 2015)

Today, the basket trade is still going strong with various websites dedicated to selling these baskets. However, in Northeastern U. S. the basket trade is threatened by emerald ash borers which cause the destruction of the ash trees used to make the baskets. To learn more about the modern basket trade and basket collecting visit http://indianterritory.com/native_american_indian_baskets.htm. To learn more about a local basket maker in New York and the struggles she now faces visit http://www.bradfordera.com/news/local/seneca-artist-reflects-on-cultural-history-of-basket-making/article_521dd993-0dd4-5ca9-86d0-4cd0a5e0f165.html

This is a Hopi sifter basket. Historically used for sifting acorn flour. The basket displayed in this picture is being sold online. Picture from seller, https://www.kachinahouse.com/vintage-native-american-hopi-made-sifter-basket.

Jennifer S. Neptunea * and Lisa K. Neumanb * a Maine Indian Basketmakers Alliance, Indian Island, ME, USA b The University of Maine, Orono, ME, USA
2015 Basketry of Wabanaki Indians. Encyclopaedia of the History of Science, Technology, and Medicine in Non-Western Cultures:1-10.