“A picture is worth a thousand words”– the elementary(my dear Watson) clichéd words of wisdom we all (or will) encounter at least once in our early years of empty-slated minds– although simple and clichéd, is how we all should approach the field of archaeology.

The title really says it all– Indiana Jones is a horrible archaeologist, and he actually creates more damage on cultural and social history than anything else. This post will explain why the approach with the mindset of Sherlock Holmes will actually make us the better and the most idealistic archaeologist.

When we think graveyard in the context of archaeology, many pop culture, up to date(or perhaps outdated ones as well, Indian Jones is pretty old after all) movie-goers will probably think: “Let’s dig to find what people buried, maybe we can find some gold.” Sherlock Holmes fans may think differently. Yes, some might dig the graves to dig up some dead bodies for forensic analysis like they do in the recent Sherlock HolmesBBC TV series,

but that’s not what I’m getting at.Sherlock Holmes, will probably take a mental picture of what he is looking at, from every details, to the type of grass, the age of the tombstones, any patterns, the relative ethnographic distribution of the area in a bigger context and picture. He will map out every detail, every singularities, differences, and similarities of the position of the entire graveyard before even digging the site.

Although all the evidences may be gathered from the site, there are still missing links that are lost that is impossible for us to obtain. The relative age, the reoccurring names, the stone wall encasing the particular graveyard, the size, the location, the soil type and samples, the decorations and engravings on the tombstones, are all pieces of a puzzle that archaeologists attempt to readjust and re-piece to map the history of their origins. Looking at figure in Ashmore’s Discovering the Past shows a graph of relative time periods certain tombstone types were popular in a particular graveyard, and the frequency of these tombstones will help determine the relative age and background about the tombstone or graveyard. But this data is not universal, and nor will it tell the history of the dead– it is merely a small tool to make an educated guess— it’s a hypothetical solution or approach to how a graveyard may have formed, under certain contexts.

Figure from Ashmore’s text, Graph of distribution and popularity of particular tombstones

In class, we approached these tombstones in different ways, Feminist and Marxist approaches to the graveyard data that the practical team gathered last week. We analyzed how a certain graveyard in Boyd Corner’s North might have oppressed women, or how women may have been treated differently than men by looking at the written words on tombstones and the general trends. Women’s tombstones all had the name of their husbands while the husbands’ tombstones did not show the names of their wives, which clearly shows the paternal nature of that community. The small size of the graveyard, as well as the walled stone surroundings shows that the graveyard was a reserved space for the small community. The dead also had reoccurring last names such as “Parker” which shows possible inbreeding amongst family members.

Observation is key and finding general patterns are important, and with general trends, we can perhaps guess about many things. But it is important to acknowledge the fact that archaeology lies in between the scientifically quantitative and the historically qualitative evidence. And at times, the evidence that is translated may be biased and not necessarily the truth, however, that itself will become part of the history and the motives behind the bias. Take the famous Paul Revere’s engraving of the Boston Massacre for example: 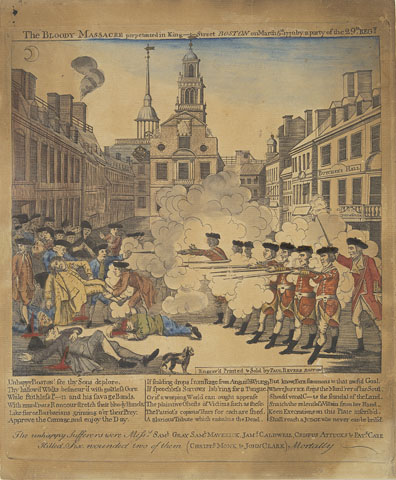 What does this image tell you about the British soldiers, the "Lobsterbacks?"

From this image we can infer many things, or guess. But these initial guesses are not backed with any evidence and therefore would not make you a Sherlock Holmes archaeologist. The picture shows the colonists completely helpless, and it looks like as if the general ordered these British soldiers to shoot on order. Another thing this engraving makes viewers believe is that the colonists look completely innocent. Reality: the colonists attacked first with snow, rocks, and fecal matter, and an accidental gunfire made others soldiers to believe that they were ordered to shoot. The British commander, Captain Prescott, did NOT order the call to shoot, and instead he was trying to calm the situation. Also many historians and history teachers teach students that they were nicknamed the “lobsterbacks”(as it says in the caption) during the American Revolution, however there is no evidence of the term being ever used until 1812-1813(Source). Paul Revere was on the Colonists’ side proving that even a primary source has its own bias and story.

As you can see, we can’t just accept things for what they look like, we have to actually observe every possible detail we can extract from anything we encounter as archaeologists. As archaeologists, we need to dig(both physically and metaphorically) as far as we can to understand the true purpose of what is found. Although one may argue that ethnographic and ethnoarchaeographic research eventually is the translation of the observer’s biases, it’s the best guess there is, and it’s viable to change and improvements over time as more evidence and more stories are gathered. Instead of a whip and a Cowboy hat and fancy battle scenes with the Nazis, Smoke pipes, deerstalkers, and magnifying glass are the more appropriate tools of a true archaeologist. Indiana Jones is more like the professor Moriarty in the field of archaeology.