With over ten million immigrants, California has the largest population of immigrants in the U.S. according the U.S. Census Bureau. This provides the state with a large multinational culture. The culture of immigrants interacts with that of the American mainstream. Within that framework there is a unique subgroup of dual Mexican-American citizens who actually reside in Mexico and have a 35 minute commute across the border from Tijuana to the San Diego area by way of the San Ysidro Port of Entry to participate in the advantages that U.S. society offers. These people are known as transfronterizos, which means cross-border in Spanish. Transfronterizos have the unique perspective of traversing two completely different cultures almost daily. This juxtaposition of two separate cultures gives exposure to conflicting ideologies and identities, and as a result, transfronterizos build their identity on something in the middle: for them that is the border (Relano Pastor 2007).

Transfronterizos may choose to reside in Mexico because of the cheaper cost of living, or for familial purpose among other reasons.  They may regularly cross the border for health care benefits, business, school, to visit family, and to see friends. They make up a significant portion of over 50,000 cars and 25,000 pedestrians that cross the border going northbound every day. The experiences of transfronterizos are not atypical in our day and age, as more and more immigrants are choosing to live and raise their children in a more transnational lifestyle; “Once a migration is firmly established, child-rearing is a transnational process. This means that in research on the second generation, we cannot assume that adults who have immigrated and settled in the United State will have children born and reared in the United States only.” (Fouron and Glick-Schiller 2002:177). People with such a lifestyle may be known as transmigrants (Fouron and Glick-Schiller 2002). The narrative of transfronterizos, however is an extreme case of this, as they are usually citizens of both countries, by virtue of having at least one parent having citizenship in each country, and they cross international borders almost daily. 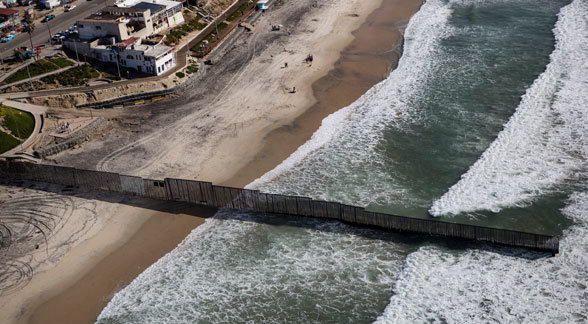 The U.S.-Mexico border cuts across part of the ocean near Tijuana and San Diego as well.

There is no accurate recent study on the number of transfronterizo students who cross from Tijuana to San Diego because many students claim to live in the U.S. with relatives in order to be eligible to attend U.S. schools. Students offer the most interesting perspective within the transfronterizo group, because they are still in the process of creating their own identity in relation to two completely different countries and cultures. They may live in Mexico, and interact with American teenage youth as they socialize and attend school, but they don’t identify wholly with American or Mexican culture.

Tranfronterizos are citizens of both the U.S. and Mexico and must form their identity with that in mind.

With many second generation Mexican-Americans it is often the case that their Spanish is not as advanced as that of Mexican natives, and they may not have a vast knowledge of their Mexican heritage. Instead, what many Mexican-Americans choose to ascribe to is something uniquely Mexican-American; “…[S]ome third-generation Mexican students are attracted to an oppositional subculture because they perceive a limited horizon of opportunity for themselves; they take on what has been described as a “Cholo” or “Chicano” identity and derogate the children from immigrant families for their diligence and ambition,” (Alba and Nee 2003:243). This is a form of contention for transfronterizos, who may share similarities with second generation Mexican-Americans, however they do not identify in similar ways; “Transfronterizos refuse to be ascribed a cholo identity because, in their opinion, cholos are born in the U.S. They are not true Mexicans.” (Relano Pastor 2007:270). Essentially, because transfronterizos live in Mexico and “cholos” don’t, they don’t identify as “cholos”.

During their time in U.S. schools, transfronterizos begin to build their identities relative to how they see themselves compared to others, as is seen in comparison with Mexican-Americans; “But as young people mature they develop multiple, overlapping, and simultaneous identities and deploy them in relation to events they experience at home, at school, at work, in the country of their birth, and in the country of their ancestry.” (Fouron and Glick-Schiller 2002:176). There are a host of experiences that are unique to transfronterizos, which provide them the background to build their view of themselves and their identity. Language is an integral part of identity formation, and this is no different for transfronterizos; “Just as language and identity are interwoven, so are culture and identity.” (Calderón, Slavin, and Sánchez 2011:111). Bilingualism and the ways in which transfronterizos speak and interact with others is an important and influential part of their experience. They may speak Spanish differently because of their time in the U.S., and as a result they are teased by Mexicans back home.  They may also feel closer to their Mexican heritage, but feel disconnected because of their time in U.S. schools. At the same time, their English may be accented, and they may feel embarrassed of this with their peers in California. This creates another disconnect with mainstream American culture, which must be difficult due to the significant amount of time they spend in the U.S.

Due to their significant time in both the U.S. and Mexico, transfronterizos must build their identity with both countries and cultures in mind.

Transfronterizos identify within a specific subgroup of Mexican and American life, and therefore do not fully identify with either, yet they have access to both cultures; “Data from the interviews suggest that transfronterizo students craft their identity across two worlds that are fluid and interchangeable due to the continuous border-crossing experiences.” (Relano Pastor 2007:274). The lives that transfronterizos in San Diego/Tijuana live serve as an important example of study; as the world becomes more connected, this may become increasingly more commonplace. “Even though some of the connections we now call transnational were present in earlier time, the ability of today’s migrants to sustain transnational connections is unprecedented.” (Kasinitz et al, :99). The example of transfronterizos, and their ability to  experience life in two different cultures serves to give insight into how today’s migrants have the ability to form their identities from transnational experiences; “We found some evidence that young people’s opinions were linked to their relationships within transnational social fields.” (Fouron and Glick-Schiller 2011:192).

The border looms in the mind of many immigrants as a reminder of the divide that exists between their native country and their current home. This barrier can be a reminder of their family left behind, and the hardships that are associated with leaving one’s own country and adjusting to life in a new country. For transfronterizos this barrier is a part of daily life. They may cross it in order to visit family, seek health care, go to school, go to work, or hang out with friends. Crossing is a way of life for them. It is part of how they identify; that is one of the things that makes them unique. The San Ysidro Port of Entry allows crossing from US to Mexico near Tijuana.