This post is the third in a series with students’ reflections on their class projects to make patterns for reproductions of historic clothing.

This semester, Professor Kenisha Kelly’s advanced draping class was assigned a challenge: observe one dress from the Historic Vassar College Costume Collection and recreate it in muslin. We were also tasked with designing a small fashion collection combining the historic qualities and styles of our dress with modern fabric manipulations that we had recently done. We had two hours one day in which to take photos, record measurements, and formulate a plan for how we were going to take this image that was created over one hundred years ago and turn our squares of muslin into a spitting image.

Each student was assigned a specific dress from a particular time period; mine was a casual teal day dress from the 1890’s (you can see it in the online database at http://vcomeka.com/vccc/items/show/1146, and you can see a 3D rotating view of it at http://vcomeka.com/vccc/VR/2004.031/2004.031.htm). The 1890’s were defined by intricate bodices and much smaller and simpler skirts than previously seen. Petticoats became smaller, however corsets were still in fashion, as well as tall collars and cinched waists. For my fashion line, I tapped into the steampunk style, a futuristic imaginative concept that puts Victorian era clothes in an advanced technical age. This allowed me to modernize the Victorian style and play around with cuts and colors, while maintaining the basic structure of 1890’s clothing concepts.

When it got down to draping our pieces, we found that each dress had its own details and difficulties. Some elements that defined my dress were tucks across the center front and back, incredibly full two-piece sleeves, and a Watteau back. Also notable, compared to my classmates, was that I didn’t drape over a corset as it was presumed that mine was a wrapper, and thus would likely only have been worn inside the home.

After we had collected our research, both in person on the individual dress and online on the general styles and trends of the era, we were given just a little over two weeks to drape bodices, skirts, collars, belts, peplums, sleeves, cuffs, and more depending on the dress. Using what we had learned about fabric manipulation in the class up to that point in the semester, we created tucks, pleats, gathers, smocking, etc. I began with my bodice and skirt and the manipulations that were included in those pieces, followed by the sleeve, collar, belt, and finally, the finishing touch, gathered trim around the wrists, collar, belt, and tucks at center front and back.

In those two weeks, we all ran into a number of road stops where we needed to rethink our original plan and rework the fabric again and again. One of the challenges that arose for me personally was that the bodice and the skirt were one piece with no seam, so I needed to drape them together, creating some very oversized pattern pieces and awkward off-grain seam lines where the skirt became fuller. Another personal difficulty was in the sleeves, which were both gathered, tucked, and matched up differently than I am used to, due to the way the shoulder seams are set very far back. Both of these took a few tries with both fabric and paper patterns; however, it resulted in a dress that, although perhaps not identical, was incredibly reminiscent of the teal wrapper and evoked the characteristics of the 1890’s.

This post is the second in a series with students’ reflections on their class projects to make patterns for reproductions of historic clothing.

For an assignment in our Advanced Draping class this semester, I recreated a two part dress from our historic collection, Dark Blue Ensemble with Crocheted Lace, which dates from the 1900s (see it online in our collection database at http://vcomeka.com/vccc/items/show/797). The first step was a close examination of the garment itself, taking pictures and notes along the way.

This was an interesting part of the process because usually when we work with pieces in the historic collection we focus on their preservation and storage, not on the nitty-gritty of their construction. The bodice, which is made up of many pleats, sloping shoulders, and a puff sleeve, took me a long time to create. By the time I’d finished the bodice (and around 3 versions of the sleeve), the skirt seemed a daunting task. I ended up taking out the skirt to look at it a second time since it’s made up of many sections with various fabric manipulations–pleating and smocking–and it was difficult to see these details in my pictures. Surprisingly, the skirt was relatively simple to assemble despite the fabric manipulations. All in all, the assignment was challenging but super interesting. Recreating a historic garment causes you to get to know the piece on another level than simply researching or storing it.

This semester, some objects from our collection of historic clothing fell under some intense scrutiny from members of Kenisha Kelly’s Advanced Draping class here at Vassar. Each student was assigned one object from the collection to study and make a pattern for a reproduction. Some of the chosen objects, like the one discussed below, are not in good enough condition to re-mount on a mannequin for display, so the reproduction is the only way that we can truly appreciate what the shape of the garment would have been like on a body. This post is the first in a series with some students’ reflections on this process.

As a member of the Advanced Draping class, I was assigned the Blue and White Striped Day Ensemble from the historic collection (see it online in our collection database at http://vcomeka.com/vccc/items/show/679).  At first when I saw the dress, I was overwhelmed by the sheer number of details; pleats, gathers, and other fabric manipulations covered the ensemble.  However, upon further examination, I found that almost none of them effected the structure of the garment.  Another immediate difficulty was that we viewed the dress on a flat surface, even though the dress is defined by the way that it creates shapes on the form, especially as this is a dress with a bustle. 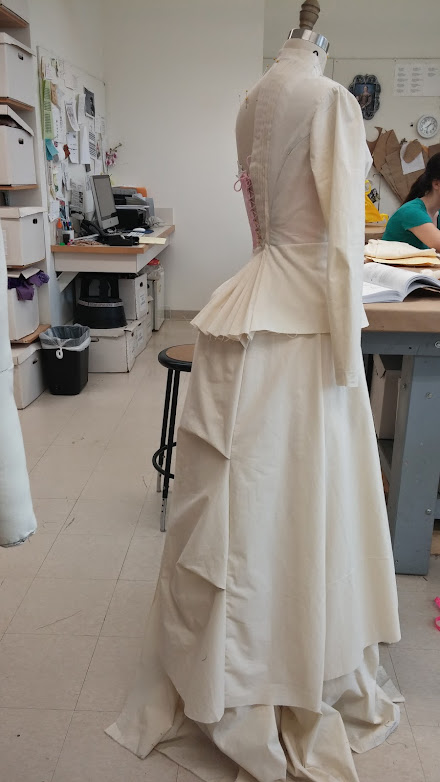 As I started work on creating the top, I ran into problems with the pleats that run down the back.  First I had to figure out how to connect the pleats at the base to the peplum in such a way that it splayed beautifully over the bustle.  Then, after stitching I found that the pleats were not holding their shape, and it took a lot of hidden stitching to allow them to be structurally sound while being able to open and give motion to the back.  The most exciting things I found while working on the top skirt were the triangle tucks I had observed, created the body of the bustle.  The little tucks that had not looked like much when the skirt was lying flat on the table suddenly were the excitement of the skirt.  It mimicked the bustling that would happen under some skirts (thus the name the bustle) without having any contraptions underneath the skirt. 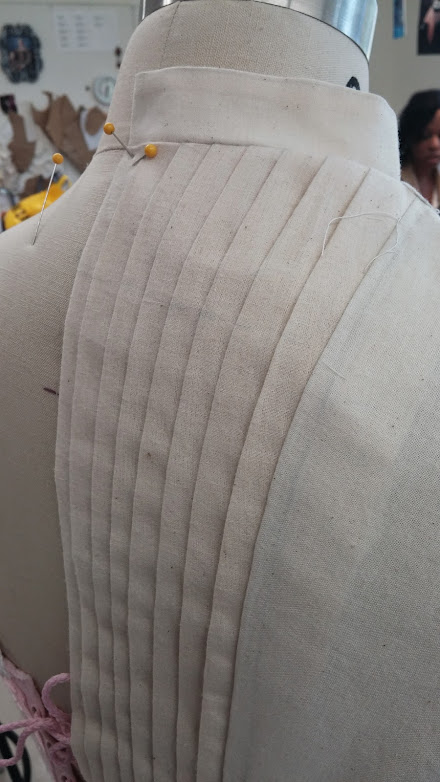 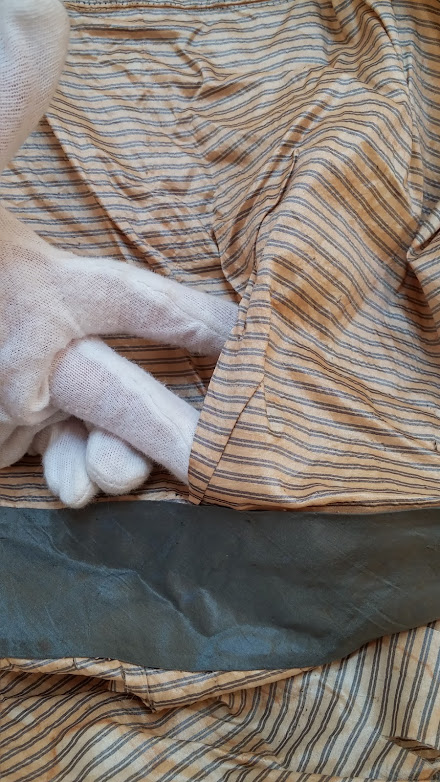 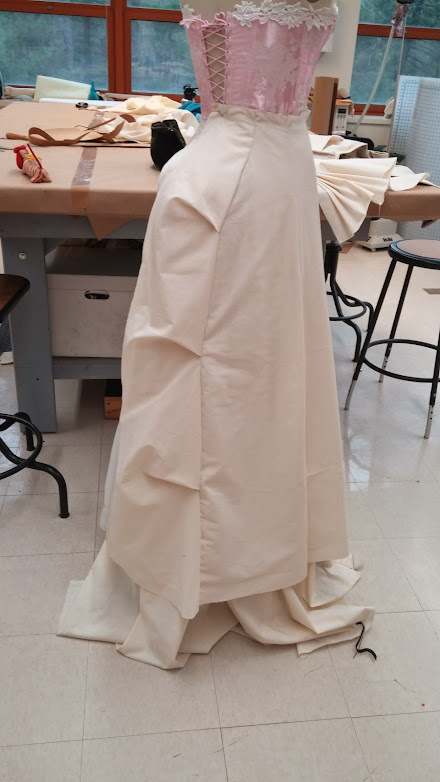 There was one aspect of the skirt that I did not attempt to replicate, simply because of the time that we had to work, but I found fascinating.  The lower skirt had cartridge pleats at the waist to allow for the extra fabric to cover the bustle (I used normal pleats). 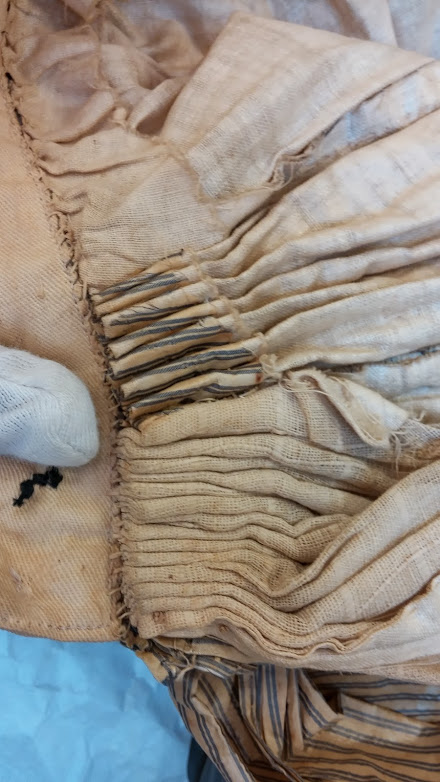 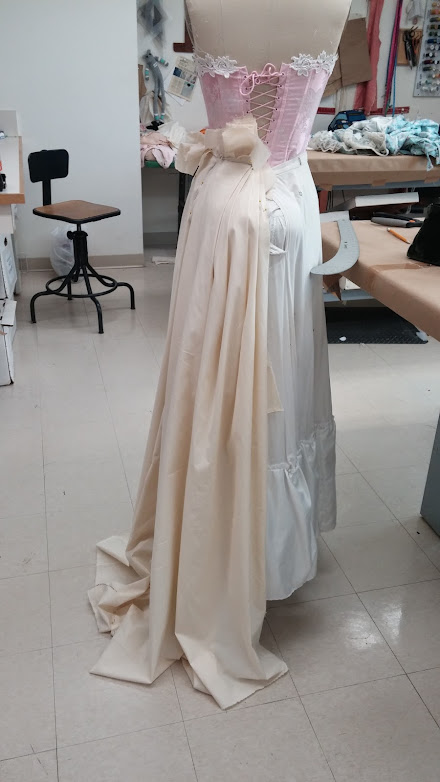 It was amazing replicating a fully created ensemble, because it allowed me to just do techniques I saw without knowing what their final effect would be as well as figuring out how to create effects without knowing how they were caused.

This work by Vassar College Costume Collection is licensed under a Creative Commons Attribution-NonCommercial-ShareAlike 3.0 Unported.