Archeology can be easily adapted to support nationalistic ideas. Thus, it is unsurprising that Hitler turned to archeology to attempt to support his belief in an ideal Aryan race. He had gained this belief from Herman Wirth’s notes about continuity in symbols around the world equating to the master race. Wirth believed that the city of Atlantis had at one point existed and that its descendants must still live on. Hitler argued that true Germans were descendant of the Aryan race, which caused his followers to feel secure in their conquest for other lands, as it was their right to take it. Because of his conviction, he assembled a group of Nazis whom he charged with finding evidence of the Aryan race that he believed to have previously existed.

This group of Nazis was known collectively as the Ahnenerbe, or The Ancestral Heritage Research and Teaching Society. Up until 1938, Hitler had the Ahnenerbe studying folklore and ancient texts in an attempt to find mentions of the Aryan race. Eventually, however, Hitler had them expand to actually conducting archeological digs in Germany. This required expanding the research team to include trained archaeologists and scientists who focused on geology. These archeological digs were in search of artifacts that would prove the existence of the Aryans. Eventually, these archeological digs moved outside of Germany to Greece, Russia, and even Iceland, where they believed the Aryans to have potentially lived. All of these expeditions, obviously, were fruitless, although they did create a multitude of propaganda from them. 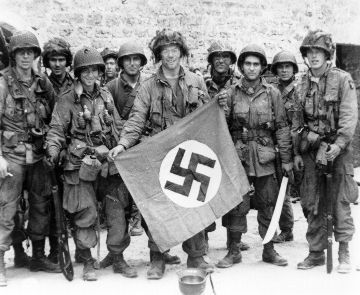 An image of some of the members of Ahnenerbe, the archeological group

Similarly, much akin to the Indiana Jones’ movies, there is the belief that Hitler was searching for the Holy Grail, as he sought the assistance of Otto Rahn, who was a historian obsessed with the legends of King Arthur. Once again, the search was unsuccessful, yet it inspired further Nazi propaganda. A shot from an Indiana Jones movie, which accurately depicts the Nazi’s search for archeological artifacts, albeit dramatically

Archeology was not just important to Hitler, however, it can be a powerful nationalist tool, even when the country is not seeking war with others. This is why current terrorist organizations, like ISIS, for instance, are targeting archeological sites in Syria and Iraq. When Isis attacked Iraq’s Mosul Museum, they focused on destroying religious shrines and artifacts. Through attacks like these, ISIS attempts to rid Iraqis of their religion, and in turn, their identity. Without an identity, many Iraqis and Syrians are liable to feel disconnected from their respective countries and thus make it easier for terrorist groups, like ISIS, to interfere.

Archeology is a potent weapon for governments and religious organizations. It can be manipulated to give a group of people pride in themselves and the “justification” that they seek. It also can be destroyed to devastate a sense of identity. However, the protection of archeological sites and artifacts can be just as important in preserving identity and loyalty to one’s country and religious group. Thus we are all more dependent on archeology than we may think.

Horseshoe Canyon in Utah is home to the Buckhorn Wash Pictograph Panel.  The Buckhorn Wash Pictograph Panel is part of a hundred and thirty-foot collection of large anthropomorphic pictographs designs. These designs attributed to the Archaic Period are most likely to have been created by a hunter gather group referred to as the “Barrier Canyon people.” Although the Barrier Canyon people did not live there year round as they were nomadic, it is likely that they would pass through Horseshoe Canyon seasonally. This then likely explains the purpose behind the pictographs; the canyons have very difficult terrain even to this day (visitor sites detail the canyon as inaccessible for wheelchairs and challenging for inexperienced hikers) and hence the designs were likely used as some sort of religious ceremony for safe travel. This is further evidenced by the location of the pictographs. The pictographs are not located within caverns or places of likely temporary habitation, but rather they are in very visible locations. Most of the designs are near the entrances and exits of long canyons. This indicates that the pictographs were likely painted before entering a long stretch of canyon, in order to pray to some sort of religious figure for safety, and were painted after having exited a stretch of cavern as means of thanks for a safe journey. There also seems to be evidence of respect for these drawings as despite the fact that there is a copious number, very few have been painted over, which gives additional merit to the idea that these designs had religious implications. An example of what has been categorized as a spirit figure

The religious implications of the designs are also evidenced by the classification that archeologists have done to the different pictographs to divide them into figures known as composite, citizen, and spirit. These then show that the Barrier Canyon people were trying to indicate or initiate contact between themselves and some sort of gods. The citizen figures are discernibly humanoid and shorter than the composite or the spirit figures and were typically using their arms in legs in some sort of activity such as running. In contrast, the composite figures did have some human-like body parts but also were made up of animals. The most common animals used were snakes, sheep, and birds, which gives some indication as to the majority of animals that lived in the canyons. Finally, the spirit figures are arguably the most interesting as they give further evidence for the notion that these drawings were religious in nature. They were anthropomorphic, however, they were also frequently missing limbs and had some other notable inhuman characteristic (large eyes, horns, or antennae). Notably, their torsos were often marked with symbols that represented the elements. This provides strong indication that these pictographs were used as a sort of religious ritual to both secure safe passage and show gratitude for it.