In her play, Argonautika, Mary Zimmerman adapts the Greek myth of Jason and the Argonauts and gives the story a fresh coat of paint. Inspired mostly by Apollonius of Rhode’s epic poem, Argonautica, written in the third century BCE, Zimmerman created and directed this new age play which manages to stay true to its original roots. Through her assimilation of Greek myth and modern theater, Zimmerman’s play highlights many of the themes present in Greek myth, like the voyage, prophecy, and mortal/god relationships, while she also creates intriguing design elements to captivate her audience and take them on a truly captivating voyage.

In the Washington Post’s review of the show from its opening in 2008, Marks slyly comments on Zimmerman’s interpretation of the classic myth by saying “her approach to the classics is what you might call a respectful irreverence… [and it] is thoroughly on display in this work.” Most importantly, he brings up how Zimmerman went about creating the text. “Her mode of storytelling” he comments, “evolved in the rehearsal room, [and] mixes the language of epic soliloquy with the vernacular of our time.” This choice of adaptation in the text is present throughout, and while random outbursts of modern slang can be distracting at times and feel a bit kitschy, it does well at using comedy to interest the audience.

The play, like most Greek myths, contains many characters, ranging from the more influential like Jason and Athena, to the smaller but still important ones, like Pelias’ Son and Uncle. However, no matter their size, each character has their own moment in the spotlight. Young, athletic, and kindhearted, Jason is the leader of the voyage. Similar to Apollonius’ myth, Jason is sent out by his aging uncle King Pelias to retrieve the Golden Fleece and is promised the throne upon his successful return. This is just the beginning of the traditional Greek theme of voyage being seen. The stage transforms to reveal a mast in the middle of the stage representing the base of the ship. Zimmerman’s design choice here easily takes the overall tale of Apollonius’ myth and brings it to the stage. The assemblage of his crew for this voyage then occurs as the “greatest demigods and warriors from across the land” join Jason. Instead of having a section of text similar to the myth in which each of these great heroes are described which drones on and on, Zimmerman writes a scene entitled “Roll Call” which introduces each of the men on the ship. This innovation does wonders for the audience for it quickly provides them with the knowledge of who they will be seeing onstage, while also making it short and precise. In the first performance of the play, they perform with drums and sit around to make their music, while later productions chose to rap over instrumentals popular songs or do a cheerleader-like routine. Either choice in performance gives the modern audience a chance to grab hold of the many characters they are given and be involved in the voyage with them from the start.

Athena, who has pledged to protect Jason on the voyage, is ever apparent next to his side during Apollonius’ myth. She is there to provide him with reasoning and good judgement. The same is true for Zimmerman’s play. This relationship between gods and mortals is important to the storyline and portrays itself in an interesting way in the play adaptation. Zimmerman designs the set with a balcony over the stage so Athena can keep watch over the entire fleet during the voyage whenever she is not present beside Jason. Hera, another goddess important in Apollonius’ myth, often appears on this platform as well. She is  present most often to keep watch over Hercules, the play’s comedic relief. Portrayed as the not-so-smart brute, Herc is constantly shouting his name in celebration of his strength, challenging the other sailors to competitions, and dealing with the wrath of Hera as she watches on from above. This choice to keep the goddesses physically above the mortals and eve involved in the unraveling of their tale is a great choice by Zimmerman. It gives the audience a relatively good idea of how important and omnipresent the gods were to Greek living both in myths and the lives of the people. The gods and goddesses were constantly in connection with the characters of myth, and Zimmerman creates a way to keep that constantly seen for the audience. Another important portion of the myth which Zimmerman focuses on in her play is the role of prophecy. Idmon, the blind prophet present on the Argo, provides Jason and his men with a fearful vision. While it differs a bit from the Apollonius story, the character of Idmon is seized from behind by Athena who holds him in her clutches while he foresees that the crews’ travels will be successful, and the fleece will be returned home one day. At the end of his vision, however, he begins weeping uncontrollably after having witnessed his own death which will take place far from home. This is one of Zimmerman’s most intriguing adaptations from the Greek myth. Athena is the only one to hear of Idmon’s fate, and even after seeing this vision, Idmon bravely chooses to join the other men on the ship even though his future is grim. This is just one of the many uses of prophecy that Zimmerman extrapolates from Apollonius. It is interesting to see how this traditional Greek theme is applied to be tangible for modern audiences. Zimmerman includes many lines which speak to the Argonauts allowing the stars to guide their fate and trusting in the gods to provide for them. This is by far one of the most important parts of Jason’s voyage. By believing in the prophecy that he will make it back, Jason and his men brave the trials they face head on with the confidence that they will ultimately be successful. This theme carries over from the myth and into Zimmerman’s play as well.

Just like the original writers of Greek myth, Mary Zimmerman is a storyteller who assembles many of the different tales of Jason and the Argonauts and then manipulates them into her own tale. Through the medium of theater, Argonautika remains true to the myth it is derived from, and it also provides audiences of today an examination of the Greek voyage with a modern twist. 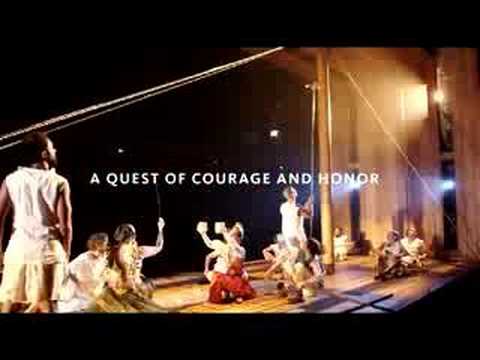 Zimmerman delivering a speech on her writing process of Argonautika.

Trailer of Aurgonatika with the Shakespeare Theatre Company.