Here’s the trailer of Troy to start us off.

Whether you watched it for the Brad Pitt’s great biceps, Eric Bana’s dark, stare-into-your-soul eyes, or Orlando Bloom’s everything, Wolfgang Petersen’s Troy has something for everyone…except those who were looking for an accurate screen rendition of Homer’s Iliad. Troy is guilty of many book-to-movie crimes: a cast that’s racially different than the characters, an implausible time frame that functions to keep the actors young and the action exciting (Troy is captured in three days), and (how could we forget?) a plot that utterly diverges in major ways from the book’s. [WARNING: MAJOR SPOILERS AHEAD, BUT THE MOVIE HAS BEEN OUT FOR LONGER THAN THE SIEGE OF TROY LASTED]. Characters die at different moments and different ways: Hector kills Menelaus when he tries to slaughter Paris, Hector kills Ajax, Briseis (who is a major character here) kills Agamemnon, and Achilles only dies after the Troy falls. Paris and Helen, along with Andromache, Andromache’s baby, Briseis, Aeneas, and a bunch of other random people, escape Troy as it burns. Pretty much a different story, but hey that’s myth for you, so many versions. The director happened to cut out a set of very important characters, in fact the characters that would have been the most important to the Greeks who originally told the tale: the gods.

Greek Gods from the British Museum

In the Iliad, the gods interfere with the war so much that there doesn’t even seem to be the illusion of free will. The gods have numerous ways to influence the proceedings. In some instances, they are direct and walk upon the battlefield themselves. Ares especially is prone to engaging with his enemies in his own form. Even when the mortal characters don’t see them, it is pretty clear what’s going on. The gods often possess or take the form of characters. In one especially memorable case, Hera possesses Xanthus, one of Achilles’ horses, in order to prophesy his death. Gods also give strength and healing to heroes more often than I could count. But they also bring death: Apollo rains arrows of plague down on the Greeks when Agamemnon refuses to give the slave girl Chriseis back to her father, a priest. They can also get pretty personal. In Book 3, Aphrodite essentially forces Helen into sleeping with Paris. Unlike the movie version, by this point, Helen isn’t really that into Paris since he’s what the Greeks would call a coward. When Helen tells Aphrodite, “It would be treason to share his bed [and] the Trojan woman would hold me at fault” (3.438-440), Aphrodite responds with “Don’t vex me, b**** [who knew sweet lil’ Aphrodite had such a potty mouth]…I can make you repulsive to both sides…and then where would you be?” (3.442-445), which is a wee bit threatening when you think about it real hard. All in all, the gods push their way into most of the Iliad, causing all types of trouble. 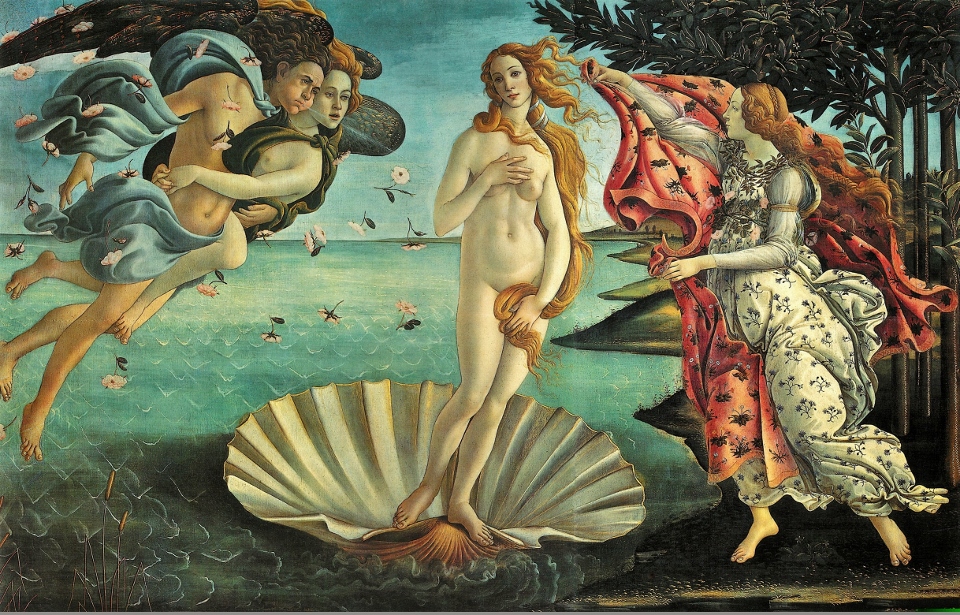 Meanwhile, in Troy, they are startlingly absent…at least as characters. Instead, their power and even existence is questioned. Towards the beginning, you can see a conspicuous lack of divine influence. A young boy questions Achilles about the validity behind the stories, saying “They say your mother is an immortal goddess. They say you can’t be killed” (an indication of the existence of the Styx) to which Achilles sasses “I wouldn’t be bothering with the shield, then, would I?” Achilles removes certainty about his divine past, causing us to question the existence of the Greek gods in the movie. When we meet Thetis, she seems a little quirky in ways that could be indications of her divinity (she’s up to her knees in the ocean gathering shells), but there are no explicit statements. Paris never references Aphrodite or his famed golden apple judgment in his motives to win Helen. Although the characters often pray to the gods or assume the gods will help them, there is no way to know if they exist at all.

In fact, the young male characters that you are supposed to most sympathize with and admire—Achilles and Hector—are all skeptical, not of the gods’ existence (Achilles even claims at one point that he has seen the gods), but of the gods’ power. The older generation of Troy represents the more religious (and less intelligent, it seems) past. There are several moments in the film where Priam, the old king of Troy, has to make a strategic choice. Much to Hector’s exasperation, he always picks with the confidence that the gods are on the Trojan side and can do something to help. When he chooses not to send Helen back to the Greece citing Apollo as a supporter, Hector sasses “And how many battalions does the sun god command?” By modern audiences, Hector seems much more rational, which is backed up by the fact that he continues to be right. 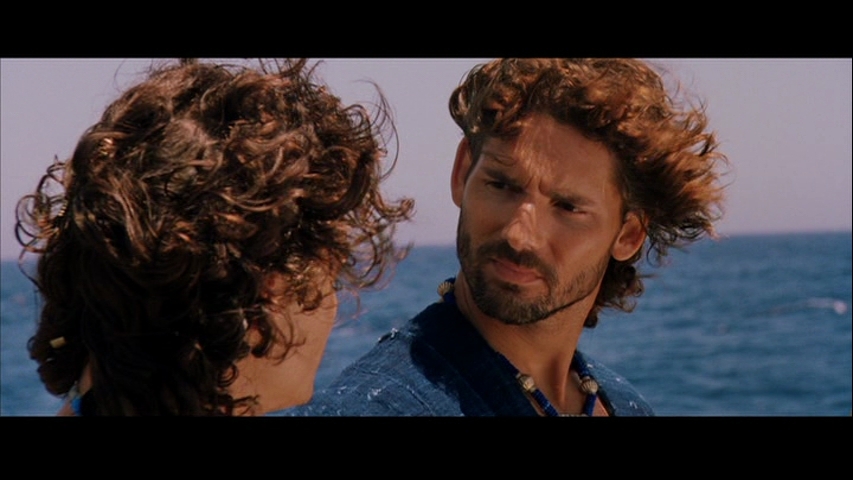 Unfortunately for Priam, he doesn’t learn from his mistakes. He continues to listen to his priests rather than his sons. Paris, in an effort to fill dead Hector’s shoes, advises Priam to burn the horse. The priests tell him that it is a gift for the gods and that they should bring it to Poseidon’s temple inside the city. Priam chooses the side of the priests and we are know how that ends. 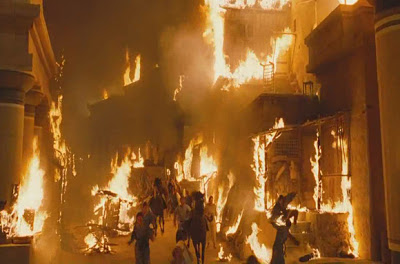 Achilles, the hero of the movie, insults the gods more than anybody else, with no consequences. Much to Troy’s consternation, Apollo doesn’t even strike down Achilles when he decapitates Apollo’s statue and loots his temple. Achilles gets into multiple arguments with Briseis, who is a Trojan priestess of Apollo, even claiming that being human is better than being a god.

Interestingly, Homer also seems to be critical of any ideas about the gods being all-powerful or even invincible to mortals. Ares gets stabbed by the Greek Diomedes in Book 5 and whines to an unsympathetic Zeus who tells him that he is “the most loathsome god on Olympus” (5.949), which is a way harsh thing to tell your son. The disputes on Olympus almost make the Trojan War seem tame. Much of the Iliad takes place while Zeus is trying to maintain his status while honoring an agreement with Thetis who helped him when the other gods revolted against him before. His situation is precarious. Poseidon is furious with Zeus, questioning his role as a supreme ruler since, by Poseidon’s reckoning, the sons of Cronos “divided up the universe into equal shares” (15.191). The other gods defy him, either by openly helping the side he’s trying to hurt or by tricking him (as Hera does when she uses Aphrodite’s lust belt and Hypnos’ power of sleep to put him out of action for a while). Despite the fear of his power, the gods can’t seem to bring themselves to stay out of human affairs, which prompts the question: Is Troy‘s Achilles right? Are the Homer’s gods bored with eternity and find that playing with human lives make their own more thrilling through our mortality?

Homer, what are the answers?

Troy uses this physical absence, but philosophical presence, of the gods to examine the role of superstition and belief. While Hector and Achilles seem to be portrayed as correct in their skepticism, they also have lives of suffering, which could indicate some more subtle forms of divine retribution. So it’s really just up for interpretation, just like religion is. While I love Troy and its philosophical meanderings that intersperse bloody war scenes, I do think that they could have inserted these questions into a movie that actually fit the original storyline. I mean, how hard can it be to follow or simplify a plot that somebody’s already written? Someday, I’d like a movie that actually has the characters it’s supposed to follow and the deaths they’re supposed to have.

Troy‘s lack of physical gods is especially interesting when juxtaposed with other modern adaptions of ancient myths. In many of them, the gods are featured as major actors, like in the Iliad, as the gods are seen as one of the most characteristic parts of these stories. However, most modern adaptions play with the role of the gods. Disney’s Hercules changes Heracles’ traditional myth as well as the personalities of several of the gods (while there is no one correct interpretation, there are no ancient interpretations that I know of that place Hera as the loving mother of Heracles). Tarsem Singh’s Immortals dramatically increase the gods’ role in the reworked story of Theseus. The traditional myth is mostly devoid of their influence. However, both of these movies do emphasize the free will of the human characters, a stark contrast from Homer’s Iliad, as well as the importance of human heroes to gods. Both Heracles and Theseus, in their respective movies, are needed in the gods’ fight to defeat the Titans. Homer almost depicts humans as the playthings of the gods. Most of the modern interpretations (including and especially Troy show humans as their own entities and important ones at that).