If scandalous family histories full of murder, black mail, and maybe even some incest, interest you, than you should check this out!

Aeschylus’ trilogy The Oresteia has a history as an infamous Greek tragedy, inextricably tied to the human condition and therefore always tied to the present.

Eugene O’Neill has taken Aeschylus’ work and transformed it to bring a contemporary audience entertainment and so much more. Myth stands as an everlasting art form and O’Neill has done an amazing job of adapting it to become an emotional, thought provoking set of plays that will leave you saying “…what?!?!?!”. 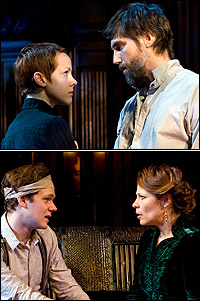 From the 2009 Off-Broadway Production Directed by Scott Elliot

The tale that ensues is one full of betrayal, secrets, blackmail, some understood incest, and lots of death. Who doesn’t love to just sit and watch a family tear itself apart right? Well, although the Mannons back stab each other every step of the way through the plays, their love is undeniable and I would like to argue that it is this familial love that becomes their undoing; ever heard of too much of a good thing? Well the Mannons take it to a whole different level.

In the first part of the trilogy Homecoming, we meet Christine and Lavinia. Christine is a mother who is no longer in love with her husband and has been having an affair with her own husbands illegitimate cousin. Livinia is the depressive, compulsive, obsessive (so many -sives!), daughter who confirms her mother’s affair the night before her father gets back, even though the affair has been happening for over a year- a detective she is not. Ezra Mannon, her beloved father and the only person who she gives attention to, makes it back right on time to begin the string of deaths. Killed by Christine because she just wants to move on with Brandt, Ezra doesn’t get a whole lot of stage time. Oh, did I mention that Brandt is seeking revenge? He was kicked out of the family. Brandt was born to a servant lady in the mansion and his dad was disinherited by his father, this  left Ezra’s father the only heir and Ezra the only heir of his generation. (is your head swimming yet?) Anyway, aside from the revenge plot, Ezra, before dying of poison, is able to let Lavinia know that her mother is the guilty one and Lavinia is left distraught.

In the second play, the plot thickens with the timely arrival of Orin- the concussed, confused, charismatic son who is the ultimate mommy’s boy. However, his view of his precious mommy is tarnished when he is finally convinced of the truth behind his father’s untimely death and turns on his mom and her precious Captain Brandt. The play ends with one murder and one suicide! Pretty great stuff folks! SPOILER! Only the son and the daughter remain!

The last play we sees the return of the siblings from a year long vacation, however, the demons that they tried to escape by going on their cruise…(what happens in cruises I wonder)… come back to haunt them, forcing one of them to suicide and the other to live a life of eternal loneliness, only to be saved by their eventual death. This person must suffer the punishment of three generations of hatred, death, and ironically enough, love. The obsessions each of the characters develop as a product of these acts and emotions are the keys to driving the car-o-crazy they’re all on.

I highly encourage reading these three plays. O’Neill loved stage directions so all you have to do is read to get a full picture of what this would have looked like, or skip the italicized parts and let your imagination do the coloring.

As far as sticking to the original myth by Aeschylus, it keeps the bones of the original myth, but gives it a whole new musculature and skin, like any good myth, it gets a brand new face with it’s new retelling! 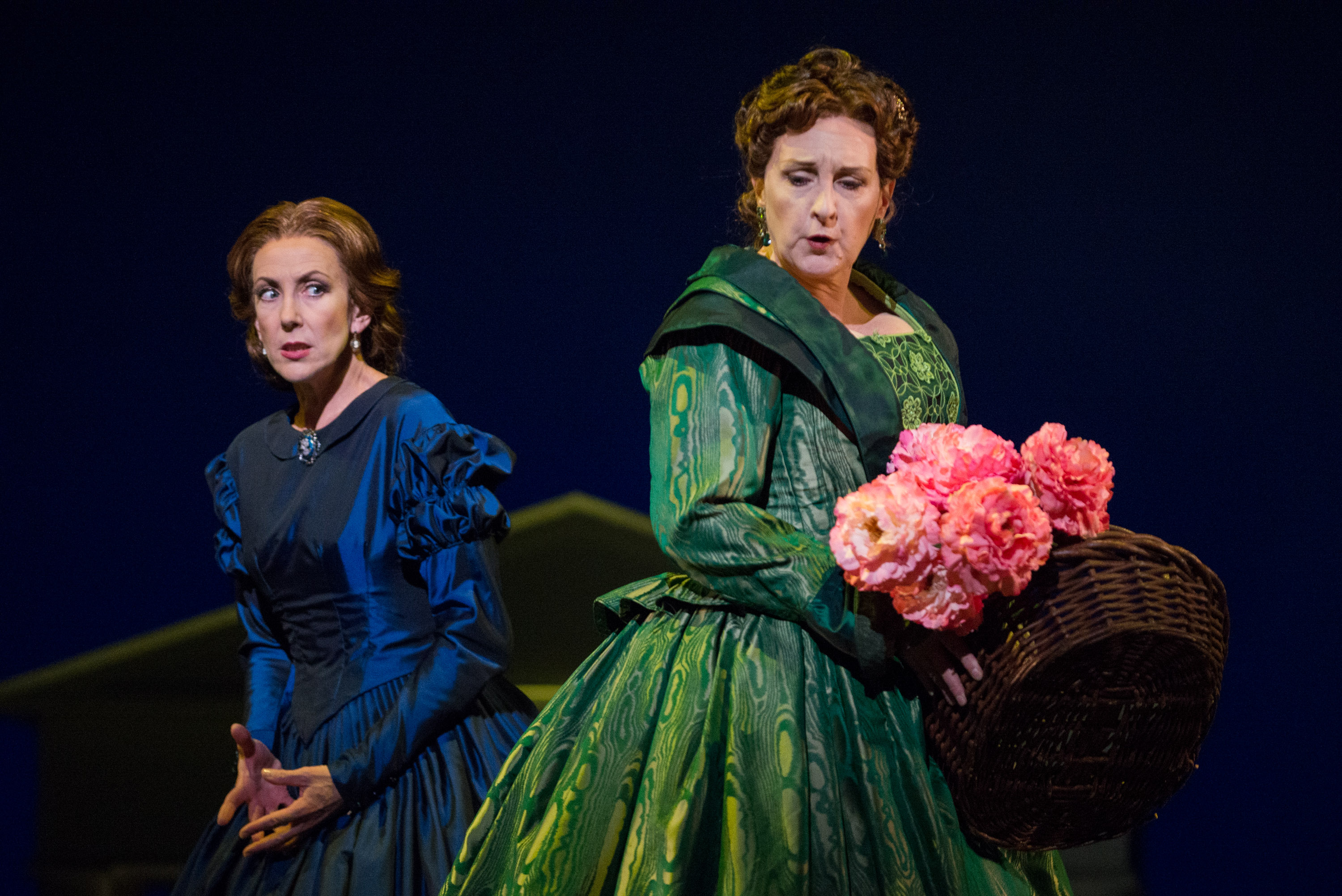 Lavinia and Christine in The Florida Grand Opera

If we take a look at the characters, The Oresteia, in my opinion, has a very clear agenda to represent women as evil when they acquire power, making the point that they shouldn’t ever have it, that they should always be submissive to men. In the modern trilogy that O’Neill has written, this theme I believe, is almost forgotten. O’Neill creates a focus more on the dynamic family that the myth is about and about how each of their relationships works to discover a different part of their very interesting family. If we look at the trilogy understanding the difficult situation O’Neill had with his parents, we begin to see how he’s challenging notions of hatred towards one’s parents and what happens if we were their killers.

This brings us to the overall plot line, which is very much the same, until the final play. Though there are tropes that stay constant, like that of the Furies which take the form of ghosts only Orin can see in the O’Neill, the end play resolves the family conflict from within, unlike Aeschylus’ trilogy. The sole survivor of all of this death is charged to live their life in eternal solitude, in a house haunted by the memories of the past, unable to separate from the realities of the atrocious family history. The notion of justice is one that O’Neill plays with and is a recurring theme for all of the characters, just like in the Aeschylus. O’Neill goes a bit further by exploring the consequences off self made justice and what happens when it turns into guilt. Multiple characters struggle with justice, and two are driven to death, while the last to a lonely existence without any love.

Rosalind Russell in the movie adaptation of Mourning Becomes Electra (1947)

But right about now you might be wondering “What does all of this mean? Families, murders, ghosts, furies etc.”. Well, it means that both playwrights have done an excellent job at doing what they are so well known for, writing good theater. Both sets of plays, though based on the exact same story, manage to create universes of intricacies within their words, pulling from the human experience to challenge difficult ideas and make you question your own standing in your own life. The plays, all six, still resonate within our current society full of liberals, republicans, all of the isms, and most importantly, our families. They pose questions that we are too afraid to ask and offer some semblance of a solution, yet leave you with so many more questions.

Well, now that my inspirational soapbox-y moment is out of the way, here are some cool links I think will help to give you a more dynamic idea of what I can only express in words.

I wanted for you to get the full scope of how this one story has been transformed over time, so I have an actor’s clip from the Off-Broadway show in 2009, another clip from the opera version of the play, and the 1947 movie adaption. (Yes, I realize it’s in black in white, but that doesn’t mean it isn’t a good movie!).

Enjoy the clips and the movie and thanks for reading!

“Every villain is a hero in his own mind.”
― Tom Hiddleston