Well, Disney got one thing right: they made “Herc” one massive dude. Heracles (his Greek name) was said to have “surpassed everyone in size and strength” and “it was obvious from his appearance that he was the son on Zeus [hence the cleft chin; nice touch right?]” (Tzarkoma, Smith, Palaima, and Brunet, 32).

While Disney’s “Hercules” may be a little more than a little inaccurate in a few areas (say, the name of the film, perhaps?), I guess it is necessary to cut them some slack–after all, it is a movie for children. For example, take Megara’s character. Or, Meg, as she is called in the film. While I could comment on how her body is grossly un-proportioned, I will refrain myself and will not (oops). In the original story, Megara is in fact Heracles’ wife, but things don’t turn out so well for her; in a fit of rage–inflicted by Hera–Heracles killed their two sons and eventually gave Megara to Iolaos so that he could marry Diandria instead (in a later version, he also killed Megara alongside their children) (41, 227). But, believe it or not, Disney subtly comments on this: in their version, Meg is a slave to Hades because she gave up her freedom in order to save her lover; but when she did this and went to the underworld, her lover apparently ran off with some other girl. While it’s not exact, Disney almost winks at the educated viewer: in reality, that old lover was in fact Heracles, and she got to Hades in a slightly different way–but no six-year-old needs to know that.

Now, it’s almost impossible to talk about the big H without mentioning (at least some of) his labors. For the most part, Disney swept over them as they were not the focus of the film (the focus of the film is about Hercules becoming immortal, the only way he can do that is by becoming a “true hero.” But we will talk more about that later!), but Disney does depict one of his labors fairly well (I know!). The epic battle can be seen below:

While this “heroic” fight did not take place in a quasi-arena in front of a crowd of people (it actually took place in a swap), nor was it commissioned by Hades, it is not entirely inaccurate (but it is still very inaccurate). In the original myth, the Hydra had “nine heads, eight of them mortal, and the one in the middle immortal,” and two shiny new ones grew back when a mortal head was severed, or “smashed” because Heracles actually fought this beast with a club, not a sword. During their fight, an “enormous crab” came to help the Hydra, and pinched Heracles’ foot, which led him to call Iolaos (yes, that is the person he gave his wife Megara to! They must have been pretty good pals, huh?). Iolaos set fire to a “nearby forrest” so that Heracles could prevent more heads from growing back by scorching the stumps with a burning piece of wood. Finally, Heracles cut off the immortal head and buried it and “placed a heavy rock over it” (35). Obviously, Disney did not stay completely true to this version of the story, but Hercules did receive some coaching (similar to the assistance he received from Iolaos) from his trainer Phil (Eurytheus), and he did end up burying the hydra in rocks. It had to be done in a public place so that people would recognize his strength and know that he was capable of becoming a “true hero.”

So, why does Disney’s Hercules want to become a “true hero” so bad? With questions like these, I find it best to begin at the beginning. In Disney’s version of the myth, Hercules was born a god, the son of Zeus and Hera (ironically Hera loves her son very much), but was poisoned by Hades as a baby and turned into a mortal (he didn’t drink every drop of the poison, however, so he retained his super-human strength). His whole life was spent feeling like he was meant for something more, trapped in a human body. Eventually, Zeus informs Hercules that he is his father, and tells him that he can become a god once more if he becomes a “true hero. ” Zeus tells him to find Phil, the hero trainer, in order to become a “true hero,” but leaves the exact path ambiguous.

As it turns out, the only way to become a “true hero” is by performing an act of selflessness, or in Herc’s case, and act of true love.

His love interest, Meg, dies when she saves Hercules (he made a deal with Hades that he would give up his powers for one day if, and only if, Meg didn’t get hurt) from being crushed by a falling pillar during his fight with a giant sent by Hades. Hercules then goes to the underworld to get Meg’s soul back and cuts a deal with Hades to trade his life for hers. Hades accepts and Hercules decends into the pool of souls that is toxic to all life, to retrieve Meg’s soul (Hades accepts this deal because he knows that Hercules will die before he reaches Meg). As it turns out, this was an act of pure selflessness (and true love) and Hercules becomes immortal en rout to Meg’s soul, so he gets to keep his life as well.

Because he is immortal

(and therefore a god) he is offered a place on Mt. Olympus to live but he declines so he can live on earth with Meg. This is how the movie ends. Again, Disney attempts to stay somewhat true to the original story, but modifies it to a “G-rating.” In the original myth, Heracles is burned to death by a tunic accidentally laced with poison from his wife (when crossing the Euenos river, Heracles put his then wife, Diandria, on a ferry with Nessos the centaur to help her across. On the way over Nessos raped Diandria and Heracles rescued her and killed Nessos, but just before he died Nessos gave Diandria a love potion comprised of “his seed” and “his blood.” Later, on a conquest of Trachis, Heracles killed Eurytos and his sons and took Iole, his daughter and intended to sacrifice her. Diandria became afraid that Heracles would fall in love with Iole and laced his tunic with the apparent love potion from Nessos. When Heracles put on his tunic to make the sacrifice,  “the hydra’s poison ate away at his flesh.” He struggled for his life: “he tried to tear off the tunic, but his flesh was torn off with it.” When Diandria learned what happened she hanged herself. Heracles then ordered his oldest son by Diandria to build a pyre for his death. There he died and became immortal.) (45).

It is quite obvious why this was not included in Disney’s version. But Disney’s rendition retains a few of the original elements: Hercules did technically have to die before he achieved immortality, and Hercules’ self-sacrifice can be compared to the original Heracles killing Nessos (both took place on a river, and they can both be considered–to an extent–acts of love). But love is a controversial topic. Until recently, love didn’t actually exist. So it is a little disturbing that Disney (like they always do) centered their entire remake of Heracles around love (something he clearly didn’t feel too strongly about, seeing as he did practically give away–or kill–his first wife, Megara, who’s character is portrayed by Meg in Disney’s version). But, I guess it makes the whole premise a little happier.

So really, Disney was set up for failure from the beginning because of their target audience, so it is hard to really blame them for screwing up the story so badly. But then again, that whole name thing was pretty bad… 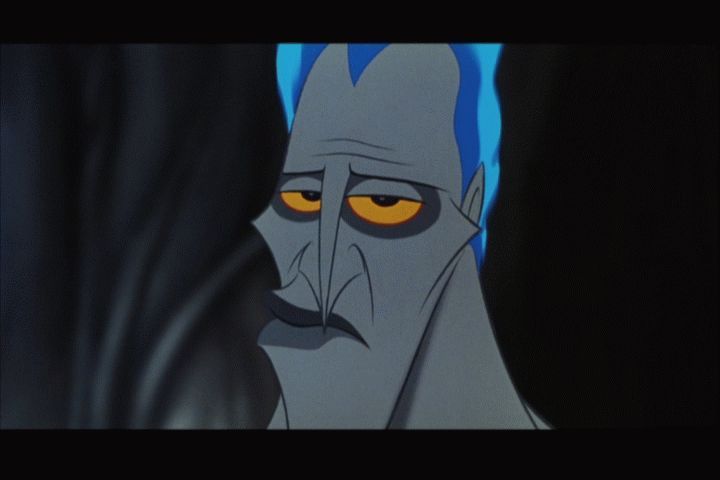 Trzaskoma, Stephen, R. Scott Smith, Stephen Brunet, and Thomas G. Palaima. Anthology of Classical Myth: Primary Sources in Translation. Indianapolis, IN: Hackett, 2004. Print. This source is credible because it is comprised of “primary texts in translation.” It is relevant to research about Heracles because it contains original myths from Apollodorus, Hyginus, and Xenophon about Heracles.

Hercules. Dir. Ron Clements and John Musker. Walt Disney Pictures, 1997. DVD. This film is relevant to my research because it is the film to which I compared the original myth(s) of Heracles.

For further information, see this article here and/or this one here !

12 thoughts on “Heracles and Disney’s “Hercules””